ISLANDERS, FRIARS GET WINS ON DAY 3

Day 3 of the pre-season tourney is in the books with the JFK Islanders and FD Friars picking up Friday night wins! Check in on another great night of basketball presented by GSPN and Buddy’s Home Furnishing. 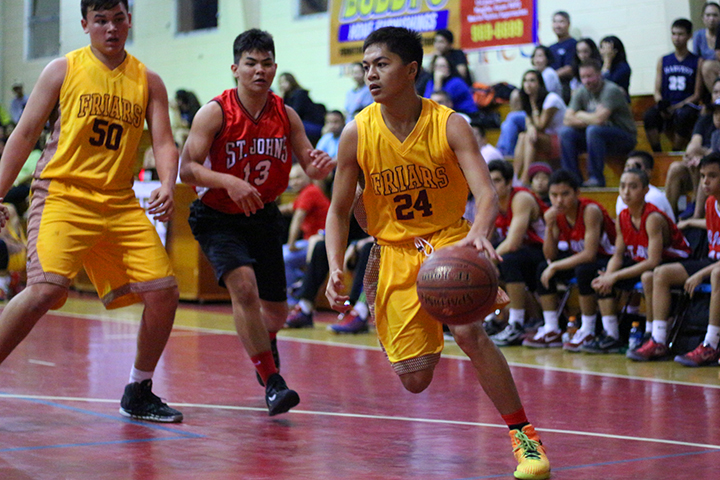 After surrendering their opening game to the Okkodo Bulldogs on Wednesday, the JFK Islanders bounced back with an easy 71-36 victory over the Harvest Christian Academy Eagles in the Buddy’s Home Furnishing Pre-season boys basketball tournament Friday night at the St. John’s gym.

The Bulldogs stunned the Islanders Wednesday night lighting up the defending champions in the first quarter going up 16-0 to start the contest. The Islanders adjusted, shook off the rust and came out more aggressively against the Eagles.

Billy Belger did not hold anything back and looked to take his shots, nailing three 3-pointers in the opening quarter to jump ahead quickly against the Eagles. Belger and Anthony Smalls led the offense for the Islanders as they went ahead 28-10 after the first period.

The Eagles, playing their season opener, did not find any offensive rhythm despite having some highlight plays from Kobe Sotelo, Mark Temerowski, and Daniel Villanueva in the first half.

Chris Conner, last year’s GSPN player of the game for the championship game, did not shoot the ball well against the Eagles but made up for it with his defense. Conner scored just 6 points on offense, but he grabbed a game high 16 boards with 5 steals and 6 blocks.

Islanders head coach Rey Serafico rotated his bench in the second half with Belger sitting the final period scoring 23 points in just three quarters. The Islanders maintained their lead in the final period to win 71-36.

“We just the worked the ball around better compared to our first game. We were focused on boxing out, getting rebounds and then just running,” said Belger. Belger made 5-7 three-pointers and also grabbed 6 rebounds for the defending champions.

“We are looking to better ourselves in this tournament and improve on working better as a team,” said Conner. Conner said the main objective of the pre-season tournament was to develop better chemistry which will help the Islanders in their quest to repeat as champions. “This tournament is good because we get to see the other teams and make adjustments along the way,” said Conner.

The Islanders keyed in on Sotelo, a GSPN all-star last season and the Eagles best offensive player, making him work to find open shots. Sotelo scored 8 points, 3 assists and 3 steals for the contest. Temerowski recorded a double-double for the Eagles with 11 points and 11 rebounds. Villanueva had 9 points and 6 rebounds for the Eagles who will look for their first win against Guam High at 145pm on Saturday. The Islanders will take in the Sanchez Sharks at 645pm on Saturday.

The Friars made their pre-season debut against the host team Knights in the late game. The Friars ended up escaping with the 79-76 victory, holding off the hot shooting Knights in the final minute.

As advertised, this game was full of highlight plays and good shooting from both teams. The Friars led early and looked to pull away but the Knights came back in the third period to take the lead.

John Tomas Fegurgur helped the ‘maroon and gold’ go up 19-12 after the first period scoring 7 points in the paint. With St. John’s center Isaac Sim still out with an ankle injury, the FD big guys bullied their way down low scoring off the offensive rebounds.

The Knights slowly jabbed their way back into the contest. The backcourt duo of Takumi ‘Curry’ Simon and Michael Min led the offense for the Knights, taking a 38-37 lead early in the third period with Min hitting a long three-pointer.

Takumi Simon breaks past John Fegurgur with ease to make his approach. (photo by Daniel Paran)

The Knights went 19-19 from the charity stripe, making all their free throws in the first three periods until Min finally missed a free throw in the fourth quarter.

The Friars reclaimed the lead with their front court stepping up against the undersized Knights to pull ahead 73-66 with under 2 minutes left in regulation. Friar coach Eddie Pelkey’s front court of Cole Merfalen, Fegurgur, David Sakazaki and De’Aundre Cruz ignited the offense to pull away in the final period.

FD Guards Roy Taimanglo, Isaiah Sablan and Josh Paulino combined for seven assists in the final period, setting up their big guys with high percentage shots down the stretch.

The Knights mounted a crazy comeback behind a three-pointer by Simon to trail 76-73 with under a minute remaining. The Knights were forced to foul twice and the Friars’ Sablan made 3-of-4 free throws to go up 79-73 with 8 seconds left.

Min made a 3-pointer on the ensuing possession to make the score 79-76 but the Knights ran out of time. The Friars inbounded the ball as the clock expired to get their first win.

Merfalen led the Friars with 15 points, Sakazaki had 11 points and 5 rebounds. Fegurgur recorded a double-double with 11 points and 11 rebounds (10 offensive rebounds), Sablan scored 10 points and dished out 4 assists.

Min had his second straight 30-plus point performance scoring 33 points. Min also had 4 assists and 3 steals but recorded 7 turnovers for the game. Simon had 25 points and got into the rebounding action grabbing a team high 8 boards for the Knights. Simon went 8-8 from the free throw line. The Knights play Saturday at 320pm against the GW Geckos.

Michael Min is stopped by the combined defense of David Sakazaki and Roy Taimanglo. (photo by Daniel Paran)

Tony Hsieh of the Knights rushes in for the layup, putting Cole Merfalen off balance. (photo by Daniel Paran)

Roy Taimanglo takes his time to plan his approach from the side. (photo by Daniel Paran)

Rudy Gaza sets up a shot from the outside for three for the Friars. (photo by Daniel Paran)

Devin Sudo breaks through the middle for the layup shot. (photo by Daniel Paran)

Isaiah Sablan shoots a pass to Cole Merfalen on the inside. (photo by Daniel Paran)