The St. John’s Knights boys basketball team have only ever beaten the Okkodo Bulldogs once in their history before their Saturday night showdown. After making adjustments on defense, the Knights earned their second ever win over the Bulldogs 55-51, their first ever in the Okkodo gym. 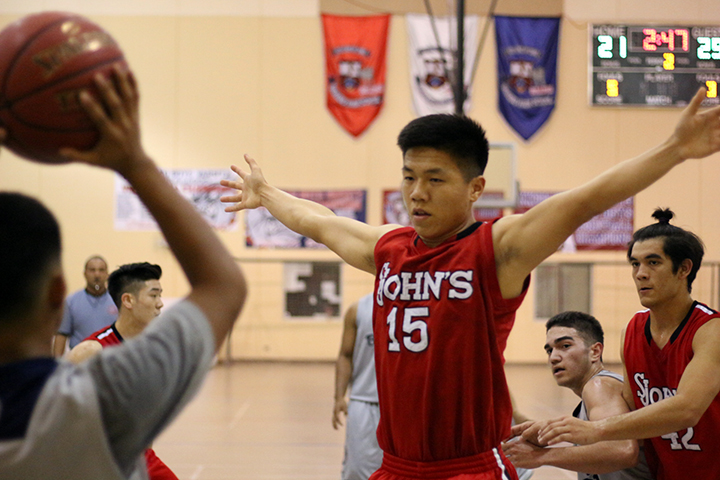 The St. John’s Knights boys basketball team have only ever beaten the Okkodo Bulldogs once in their history before their Saturday night showdown. After making adjustments on defense, the Knights earned their second ever win over the Bulldogs 55-51, their first ever in the Okkodo gym.

Takumi ‘Curry’ Simon led the Knights with 24 points and Michael ‘Mint’ Min added 17 in the win. Simon also nailed a clutch three-pointer to go up 54-50 in the final 1:30 of the game after teammate Gavin Moore split a double team to find Simon wide open on the wing. Nicknamed ‘Curry’ for his lights out shooting after his idol Steph Curry, Simon came into the game in the zone.

“I watched at least 8-10 videos of Steph Curry today,” laughed Simon. “It felt really good to hit that shot.”

“He works every day for that kind of shot,” said Min. “He shoots a thousand shots a day for those kinds of shots.”

Vern ‘#TheVern’ Gustilo led the Bulldogs with 17 points with Austin Blaz adding 12 and Nate Lorenzo tallying 11 in the loss.

A lackluster defensive performance in the 1st quarter had St. John’s down 21-14 with the Bulldogs scoring multiple baskets in the paint. That then prompted the Knights to play more aggressive in the 2nd quarter which turned the game in their favor.

“We had everyone on the same page. We ran the same press that we run in practice every single day and everyone executed really good,” said Min on the game-changing defense.

“We always want to start out as best we can, but today we didn’t. We just woke up in the second quarter,” said Simon on the turn of the tide.

St. John’s opened the 2nd with a 15-0 run to take a 29-21 lead, keeping Okkodo scoreless until the 2:40 mark. Bulldog Nate Lorenzo finally broke the scoreless spree with Okkodo getting three baskets in the final two minutes to keep it close, but still trailed 32-27 at the half.

Gustilo turned on the afterburners in the 3rd quarter scoring eight points, including two deep threes that helped his team recapture the lead 43-42.

Wendy’s Players of the Game, Michael Min and Takumi Simon of the St. John Knights. (photo by Daniel Paran)

Simon nailed a three from the corner on the Knights first possession in the 4th to go up 45-43 with the Knights holding on to the lead for the remainder.

The Bulldogs stepped up on defense in the final three minutes forcing three turnovers, but only managed to capitalize on one basket. Liann Torres intercepted a pass from Min and converted on a layup to get within 51-50 before Simon’s clutch shot.

Simon did miss a free throw to leave a small window open for Okkodo in the final minute still up 55-50.

A technical foul was called on the Knights bench with 40 seconds to go after words were being directed towards the referee after a non-traveling call on Okkodo. Torres only converted one of the freebies still trailing 55-51. Okkodo took 13 seconds off the clock trying to get into their offense which ultimately ended in a turnover allowing the Knights to hang on for the win.

Last year’s Knights win over the Bulldogs was the first in the schools history. That win may have come to a surprise from the then-underdog Knights, but their win Saturday night was on equal footing. The varsity basketball newbie Knights are no more and a championship is in their sights.

“Every game we prepare the same way. We have to hit our free throws at the end. That last free throw I missed was really disappointing, but we just have to work hard everyday in practice if we want to win a championship,” ended Simon.