The both the boys and girls of the defending champion GW Geckos dominated the opening day of the 2016 rugby season at the Gecko field. Check in with the highlights of the kick off as well as the complete scoreboard here! 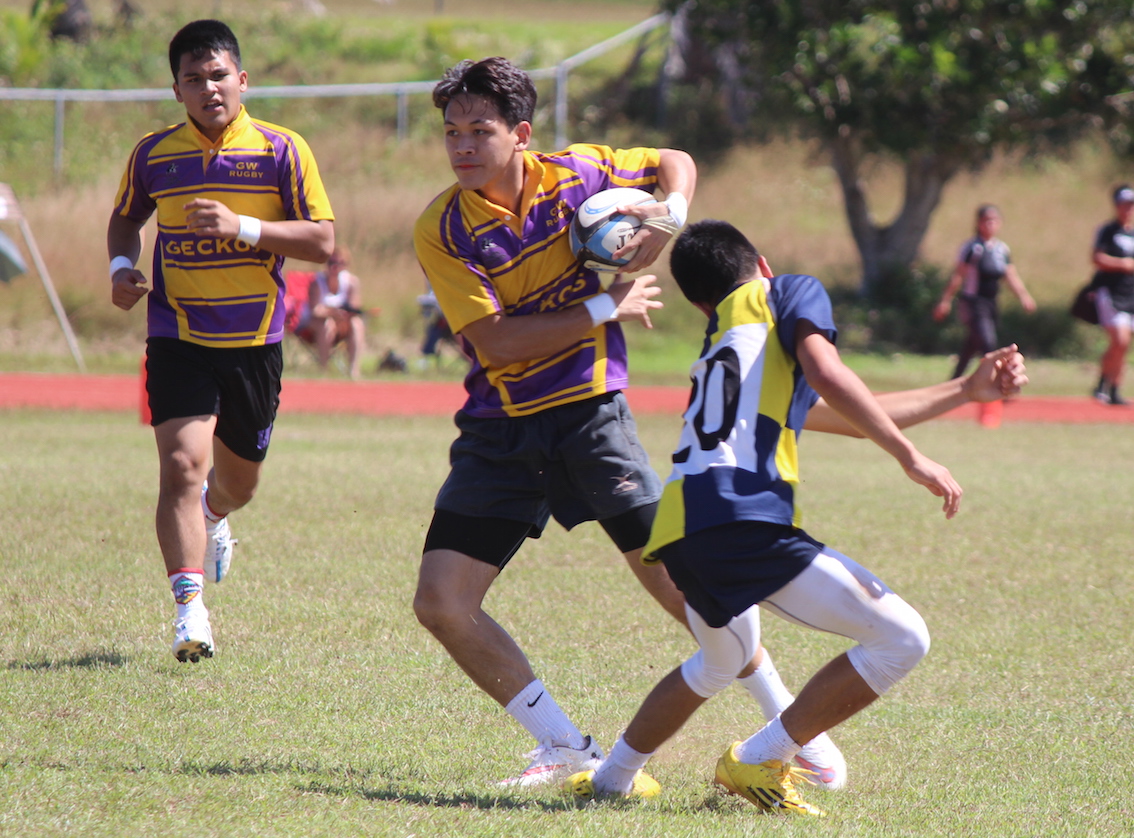 ISLANDERS AND DOLPHINS BATTLE TO DRAW

The 2016 IIAAG high school rugby league began Saturday with the boys’ varsity division providing some great inaugural performances to the season. While the defending champion GW Geckos, the FD Friars and Sanchez Sharks all came away with convincing wins, the match of the day came at the end, as the JFK Islanders and Southern Dolphins rounded out the action, drawing 5-5 at the end of the game.

Despite the rare scoring, the game was certainly one to admire from the defensive perspective as both teams were undaunted by attacks, making it difficult for either side to come away with points. Early on, the Dolphins looked to camp out in Islander territory until Devin Duenas would create a turnover, stopping the Dolphins’ effort and sparking a counter attack. From there both defenses rarely looked out of form, as big tackles were littered throughout the first half.

The energy levels certainly picked up afterwards, as both teams came out firing their best shots. The Dolphins were first on the board, as Jerick Navarro scored the first try of the game, the result of a strong attack marshaled by Dolphins captain Napu Topasna.

JFK were all too ready to respond, as high work rates from the Islanders’ forward pack saw center Marcus Manglona find enough space to penetrate through the defense and even the score. From here both teams failed to find any breathing room, and costly mistakes stemmed either side from creating further scoring opportunities. By the end of regulation, both teams had emptied the tanks, leaving the final score at 5-5.

JFK begins the 2016 season under new management, as Guam national team players Steven Sablan & Alex Tenorio have taken over as coaches. Their experience seems to have been warmly received by the players; Islanders captain Colin Perez explained that their presence has brought a new aspect of the game. “The coaches are more technical than we’ve had, and they’re helping us to develop the mental side of the game,” Perez explained, “we’re learning more.”

Perez and Manglona commented on the team’s defensive performance, explaining their desire to continue to work on their skills as well as controlling the opposition’s attacking channels and options. Under their leadership, the Islanders look to position themselves among the contenders this year.

The Dolphins have come into the season under less than ideal circumstances. The recent bomb scares at their school campus have left them with minimal time for training; add to that a large group of rookies, and the Dolphins may seem under pressure. However, the senior leadership in the group has not let that deter their efforts to compete for the school’s second boys championship, with the first one coming back in 2008.

“Our leadership has been strong, and Coach is always putting it on us to step up,” said captain Topasna. “We have a lot of new boys, but their athletic. When they’re in the right position they can make the play. From here, we need to work on fixing miscommunication and develop our team chemistry.”

The Dolphins lost in the semifinal last year to the eventual champions, pushing the Geckos to the brink.  Today’s decision, while not what they wanted, keeps them on the radar. If the Dolphins are able to surpass their previous year’s performance, we may see them competing for a championship this season.

*Check out full results from all of Saturday’s action below

The 2016 IIAAG high school rugby season kicked off this weekend, and the GW Lady Geckos put the entire league on notice with their performance on Saturday. As hundreds of spectators surrounded GW’s rugby field to cheer on their respective teams, the Geckos successfully opened their season campaign with resounding victories over Guam High (42-0) and Academy (31-0).

In their first match, the Geckos’ unrelenting defense kept the Panthers under pressure throughout. Despite a shaky start to the match in the form of a poor kickoff, GW quickly recovered as Shai-Anne Trinidad outpaced her counterpart to dart down the first score and opened the floodgates. Soon after Jalana Garcia added the first of her two tries of the game.

As GW quickly created turnovers, captain Heather Garrido would see the try-zone, followed by Leticia Blas. GW would continue to systematically dismantle their opponent, moving the ball quickly into space as Garcia and Trinidad put the exclamation point on the match. Blas would also successfully convert all of her team’s tries, as the Geckos dominated the Panthers 42-0.

In their latter performance against the Cougars, the Geckos’ discipline on both sides of the ball overwhelmed their opponents, as Academy runners were met immediately by a wall of Gecko defense. After setting the defensive tone for the game, GW went on the attack as Garrido would score the first try of the game.

A balanced attack throughout the day, the Geckos saw a huge workload from Aura Gumba, whose skill and size could not be contained by a smaller Cougar side, as she drove her way through the defense to score. In the second half, Blas continued her brilliant performance from earlier with an impressive try over 50 meters, breaking out of two tackles before out pacing the defense. Garcia would add to her point totals with a third try for the day, and Kaylene Blas finished out the scoring for the defending champs, as the Geckos handled the Cougars 31-0.

Speaking on the Geckos’ mentality heading into their title defense Garrido was humble, explaining that “this is a new year and we haven’t won anything yet… we’re looking to work as a team, support each other and take the season one game at a time.” Garrido would continue, speaking to the team’s goal of progression throughout the season.

Standout performance for the day belonged to Leticia Blas who was integral in setting the tone for the Geckos on both sides of the ball as she exerted her will in contact to force turnovers, and tore through defenses en route to scoring 2 highlight-reel tries on the day, finishing the day on 28 points scored.

On one of those tries, Blas emulated Arizona Cardinals’ receiver Larry Fitzgerald’s recent OT playoff performance, as she tore through two defenders and fended off a third challenger, before outpacing the field en route to a 70 meter score.  Blas, a current member of Guam’s National Women’s Sevens team, has already gained international experience against quality sides from Japan and Hong Kong, apparently giving her an advantage over nearly the entire league.

As strong as her offensive performance was, Blas anchored the Gecko defense as they prevented both of their opponents from a single score. Blas’ take on her team’s defense remained as simple and modest as her demeanor, stating that the team’s mentality is to “make the tackle, get up and do it again.”

With one week in the books, the Geckos look to build on their dominant start and stake their claim for a sevens championship yet again.

Next weekend’s action continues at George Washington High School, with games scheduled from 9am all the way until 5pm. Tune in as GSPN will be looking at the Notre Dame Royals’ performance.

The FD Friars proved too much for the Okkodo Bulldogs, getting the opening day win. (photo by Robert Balajadia)

The FD Friars proved too much for the Okkodo Bulldogs, getting the opening day win. (photo by Robert Balajadia)