A wild Tuesday night in the IIAAG boys basketball league may have set the tone for what’s sure to be an ultra competitive rest of the season. 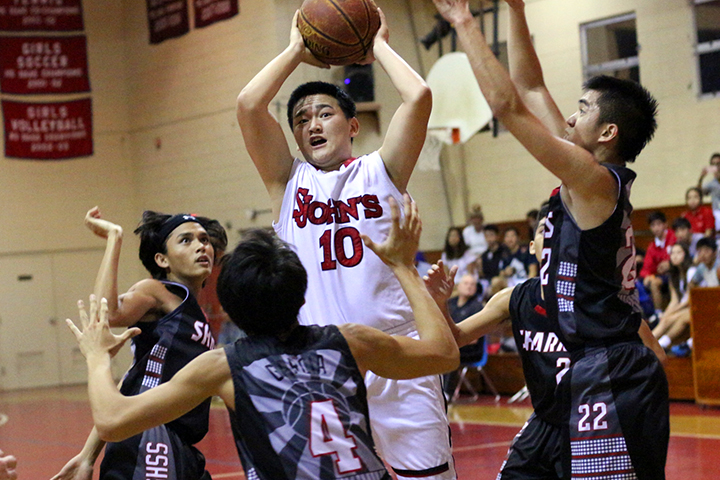 A wild Tuesday night in the IIAAG boys basketball league may have set the tone for what’s sure to be an ultra competitive rest of the season.

The (4-0) St. John’s Knights are only a quarter of the season in, but are already proving themselves as one of the leagues best teams. The Knights 59-47 win Tuesday night over the scrappy Sanchez Sharks tells a lot about the Knights and their maturity into a power house group.

“We lost to Sanchez by five points at the end of the season last year and this time we were able to win by 12. This team understands this year what it takes to win and it begins in practice preparation. Last year they practiced like freshmen, which they were, but you’ll have some guys like [Michael] Min who stay in the gym till 10:30 at night,” said Knights coach Fred Peters on his 2016 team.

The points come in bunches for the dynamic duo, but their biggest takeaway against the Sharks was on the defensive end, limiting the spark plug Shark John Buan, who was also in foul trouble, to just 10 total points.

“We were absolutely prepared to handle [Buan] tonight,” said Peters on his teams defense. “We know we weren’t going to stop him one-on-one so we did a good job at forcing him baseline and forcing the ball out of his hands. We made him rely on his shooters and tonight that worked for us.”

The Knights led wire-to-wire controlling the opening quarter 18-11 with Min and Simon both hitting a pair of threes for six quick points. Min then scored 10 points in the 3rd quarter to push the Knights up 43-32. He then added seven points in the final period to close out the Sharks, netting his 28th point on a deep three.

The Sharks lose for just the second time this season and fall to (2-2) with their next game scheduled for Friday night against the Okkodo Bulldogs.

Ejections lead to calling of Warriors vs. Bulldogs

The record will show that the St. Paul Warriors picked up their first win of the season at home over the Okkodo Bulldogs 54-50, but the truth is ugly.

Two Bulldog parents/fans were ejected in the 3rd and 4th quarters, along with Bulldog guard Vern Gustilo, that led to the immediate calling of the game with 5:45 left to play in the 4th quarter.

A heated game between both teams had fans from both sides disagreeing with the games officiating. The tension led to a 3rd quarter ejection after a technical foul had been called on a Bulldog player which prompted one parent/fan to rise up and voice his disagreement to the referee. That led to the ejection after what appeared to be threats towards the ref.

The game carried on until the 4th quarter where Gustilo corralled a long rebound and sprinted up the court to begin the fast break. Upon doing so, Gustilo collided with an official that caused him to turnover the ball. The possession stayed with the Warriors which Gustilo then approached to ref to voice his frustration, leading to a technical foul being called on Gustilo.

Then, a parent/fan came racing to the center court in the direction of the ref, but the Bulldogs players and coaches managed to hold back said parent/fan. The ref then had both Gustilo and the disgruntled parent/fan escorted out of the building and shortly after called the game off. Both refs awaited police escort to ensure their safety.

There’s no better way to snap a 19-game losing streak than by beating the league’s defending champions.

The Harvest Eagles defeated the JFK Islanders 57-53 at home Tuesday to shake up the IIAAG standings. The last two wins from Harvest came at home, beating the Islanders in 2016 and also beating the FD Friars in 2014.

The three-point weapon was working for the Eagles as they connected on nine three-pointers while limiting the Islanders to single shots, keeping them off the offensive glass.

It’s been a rough season for the Eagles having two winless runs in the past four years. An 0-16 finish in both 2015 and 2013 seems a lifetime ago with their best start to the season’s first quarter coming this year at 1-3. The Eagles were a combined 2-48 since 2013 leading into the game.

JFK came in riding close wins over both the Okkodo Bulldogs and Sanchez Sharks, but now fall to (3-1), moving behind the St. John’s Knights in the Taga Division.

The balanced attack by the FD Friars were too much for the pre-season champion GW Geckos.

With so many weapons coming at the Geckos and a halfcourt offense that was working as it was drawn up, the Friars methodically built a large lead on their way to a 73-58 win Tuesday night at the Phoenix Center in IIAAG boys basketball action.
FD never trailed in the game.

“Our boys really executed our halfcourt sets, especially in the first half,” Friars head coach Eddie Pelkey said. “It got away from them a bit late in the game when GW made its run, but overall the boys did a great job. It was business-like. I was satisfied.”

With spread out and balanced sets, the Friars executed its halfcourt game at will resulting in many open layups – usually getting started by backcourt mates Josh Paulino and Roy Taimanglo.

FD pulled away from an 11-11 game to end the first quarter leading 20-15 on an Isaiah Sablan floater.

The pressure didn’t stop there as Thomas Fegurgur’s layup in the second quarter pushed the lead to 35-20.

“We made better reads once the defense adjusted and went through our progressions a lot more fluid, so we’re making strides in the right direction,” Pelkey added.

The Friars’ largest lead of the night came late in the third when another Sablan floater increased it to 56-36.

The scrappy Geckos benched fought hard and cut the lead to 63-51 on a Karlo Deleon layup, but it was too little too late.

Taimanglo led the balanced Friar attack with 14 points with Paulino dishing out no-look dimes throughout. Leon Shimizu chipped in 12.

Devin San Agustin had a game-high 19 points in a losing effort. Kyle Gaitan had 12 points, 10 coming in the first half.