The Taga division in the IIAAG boys basketball league just got a little more interesting. The Sanchez Sharks avenged their early season loss to the JFK Islanders, beating JFK in the Shark Pit 57-53 Saturday night. 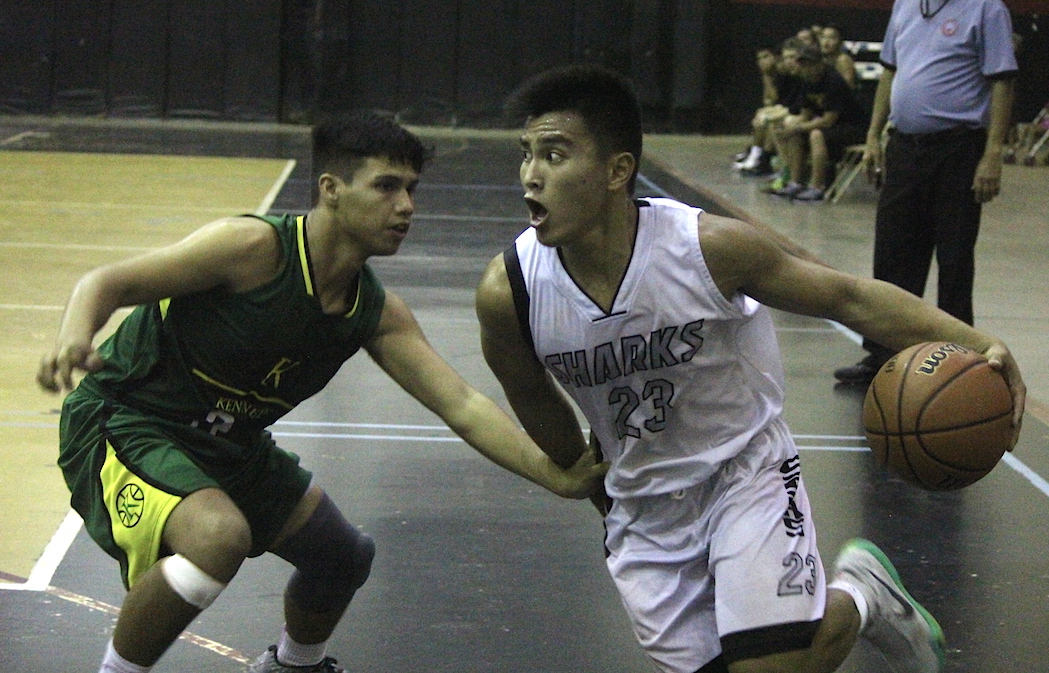 The Taga division in the IIAAG boys basketball league just got a little more interesting.

Just a couple of days ago, the defending champion JFK Islanders were cruising on their way to home court advantage throughout the playoffs and a first round bye. The Islanders lost Friday night to the Geckos and were defeated again on Saturday night in an overtime thriller against the Sanchez Sharks 57-53.

Sanchez dropped their first meeting to the Islanders in the season opener at JFK by a point, the Sharks got their revenge on the eve of Yigo fiesta defeating the defending champs.

The Sharks added icing on the cake with the junior varsity team defeating the previously unbeaten Islanders 29-26. The JV Sharks (9-2) finished the game on an 11-0 run to hand the Islanders (10-1) their first loss.

Evander DeGuzman had the hot hand for the Sharks off the bench going 3-for-3 from long distance to help the Sharks gain the early advantage. Chris Conner kept their Islanders in the ballgame making shots from the paint as JFK trailed 30-26 at halftime.

Billy Belger led the offense in the third quarter to tie the game at 34-34 going into the final period. The Sharks made a strong 6-0 run with 4:14 left to go up 44-38. Anthony Castro made a lay-in, John Garcia made two free throws, and John Buan capped of the run with a reverse lay-up which forced JFK coach Rey Serafico to call a timeout.

Sanchez had the game in the bag but allowed the Islanders to come back after committing turnovers. Islander guard Aljurrel Grape scored 8 points in the final two minutes to bring the Islanders back. Grape’s efforts forced the game into overtime with the score tied 48-48.

Belger was forced to watch the extra period after committing his fifth foul with two minutes left in regulation. The Islanders still help their ground in regulation and overtime with Grape leading the offense anchored by good defense from Chris Conner.

The game was tight until less than a minute left in overtime. The Islanders were in the penalty and fouled Buan who made two free throws to go up 52-51. The Islanders missed a shot and the Sharks had possession with 40 seconds left. After a timeout called by Shark coach Jin Han, the Sharks scored on a back door play with Buan making the lay-in to go up 54-51.

Islander coach Rey Serafico called a timeout to counter by drawing up a play but DeGuzman came up big on defense and forced a jump ball with possession in favor of the Sharks. Castro sealed the victory from the free throw line to improve to (8-4), the Islanders fall to (10-3).

“Our coach [Han] tells us to be smart. Every game is a lesson learned whether we win or lose,” said DeGuzman. DeGuzman came off the bench and contributed 15 points. Buan also scored 15 points and grabbed 6 rebounds. Castro had 11 points and eight rebounds, Garcia scored 12 points for the Sharks.

Grape had a game high 19 points and 6 rebounds. Conner had 16 points, 9 rebounds and three blocks.

The JV Sharks squad pulled off the exciting comeback to hand the Islanders their first loss of the season. The Islanders were up 26-18 with four minutes left in regulation until the Sharks mounted their comeback. RJay Saburo hit a three pointer to make to trail by a point with less than a minute left. Nic Foster made the go-ahead lay-in with less than 30 seconds left to go up 27-26.

The Islanders turned the ball over and were forced to foul Foster who made two clutch free throws to put Sanchez up 29-26. The Islanders Cliff Rosas had a clean look from three-point land to send the game to overtime but the stiff Sanchez rim didn’t allow the friendly bounce as the Sharks celebrated the victory. Saburo had a game high 13 points for the Sharks.