ISLANDERS DOMINANT IN WIN OVER TITANS

The JFK boys rugby team is picking up steam after dominating a tough the Tiyan Titans team Saturday in Rugby’s Week 4 of action. 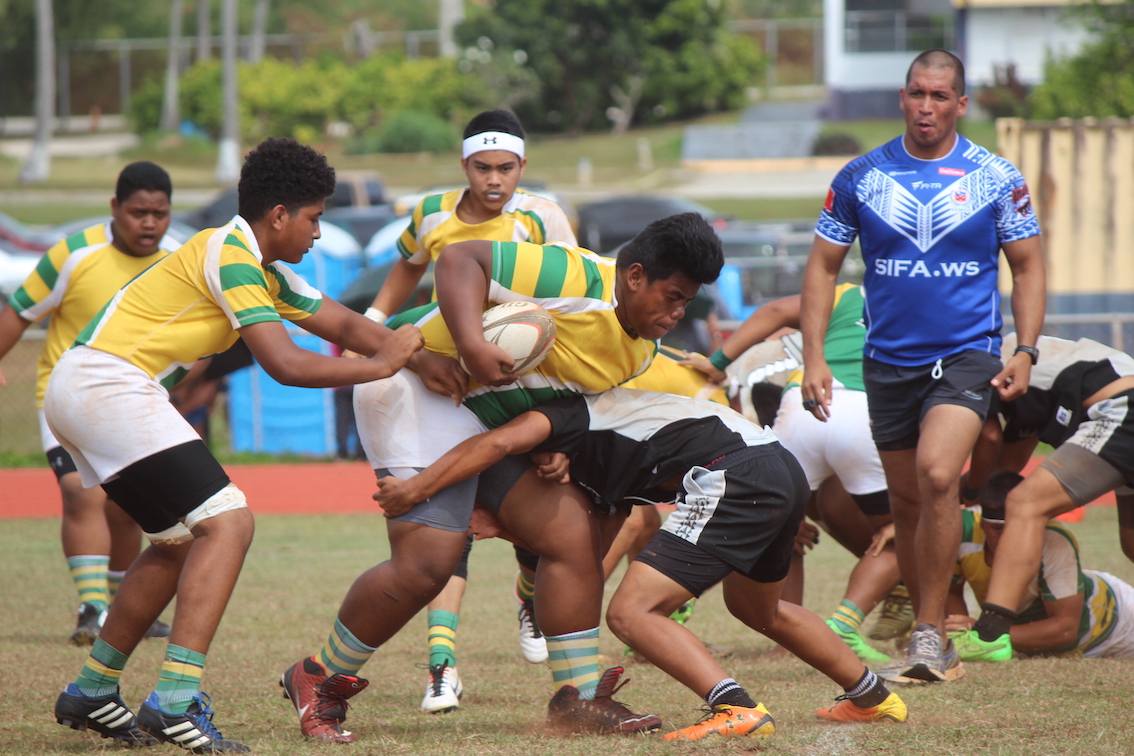 This weekend the JFK Islanders lit the Wettengel rugby field up, as they showcased a dominant attacking performance against the Tiyan Titans, cruising to a 32-0 win.

While the Islanders have usually finished out their previous seasons around the middle of the pack, they appear to have taken a big step forward under the management of new coaches, former Guam national team members Steve Sablan and Alex Tenorio.

At (3-0-1), JFK remains near the top of the table in the league, and has a big mid-week game against the GW Geckos, who lost to the Southern High Dolphins this weekend.

JFK captain Antwon Palacios spoke to the mentality that his team has been cultivating this season, explaining that during their trainings they focus on their defense. “Our defense has been really good,” said Palacios, which is a big statement to make, considering that the Islanders are a very young team, with several newcomers to the sport.

From the opening kick, though, JFK appeared to have their hands full with the unrelenting defense of the Titans, which would explain the Islanders’ early ball handling errors.  Even as JFK would make its way into Titans territory, the defensive pressure caused some uneasiness and the Islanders left some early scores off the board.

Tiyan’s performance has grown leaps and bounds since their inaugural season last year, and they have put together a very competitive side under the management of Guam national team member Sixto Quintanilla III. In one instance a possible counter attack by the Islanders found no momentum as Titans’ Christian Diaz put a huge hit on the runner, causing a lost ball and giving possession to Tiyan.

From there, a penalty against Tiyan gave Palacios enough space and an opportunity as he raced thru the defense to score the first points of the game. Later in the first half, a JFK scrum opened up running room for Bryce Aguero, and they quickly recycled the ball out to winger AJ Benavente for a score, taking them into halftime with a 10-0 lead.

As strong and capable as Tiyan has played, their lack of depth in the reserves has been their undoing as they have failed to maintain throughout an entire game. This, again, would prove to be the case against JFK, as the Islanders defense immediately out of halftime had left the Titans beaten. Benavente would score his second try of the game off of a big run and pass from Alvin Gomez, and Freddie De Gracia successfully converted his kick.

The second half saw a strong performance from Islanders Sage Garcia, who has shown his versatility, playing both a front-rower and a loose forward, a very tough responsibility at any level. Out of a penalty, Garcia found space to draw in defenders before passing the ball to an uncovered Aaron Ramirez who outraced the defenders for another score.

Garcia would again set up teammates, grinding thru the Titans defensive line before offloading to reserve Stephen Guerrero for the score. The Islanders remained comfortable and closed out the game on a high note as Shawndee Taitingfong was the beneficiary of a huge JFK counter attack, scoring a try and leaving the final score at 32-0.

Garcia has proven to be a good player in previous seasons and displays a quality of leadership within the JFK forwards pack. A true leader, Garcia gives praise to his squad, saying that this year has been markedly different as they have been playing well as a team.

“We’re only getting stronger,” Garcia added of his opinion of his team, “before the game, when the coaches ask for words I just tell the boys to clean your cleats.” The Islanders’ task this week will represent a true trial by fire, as they play the Geckos Wednesday evening, followed by the FD Friars on Saturday.