The Okkodo Lady Bulldogs have emerged as one of the top teams in the 2016 season. Saturday’s performance left a lot of positives, but also areas where the team can improve with a championship in their sights. 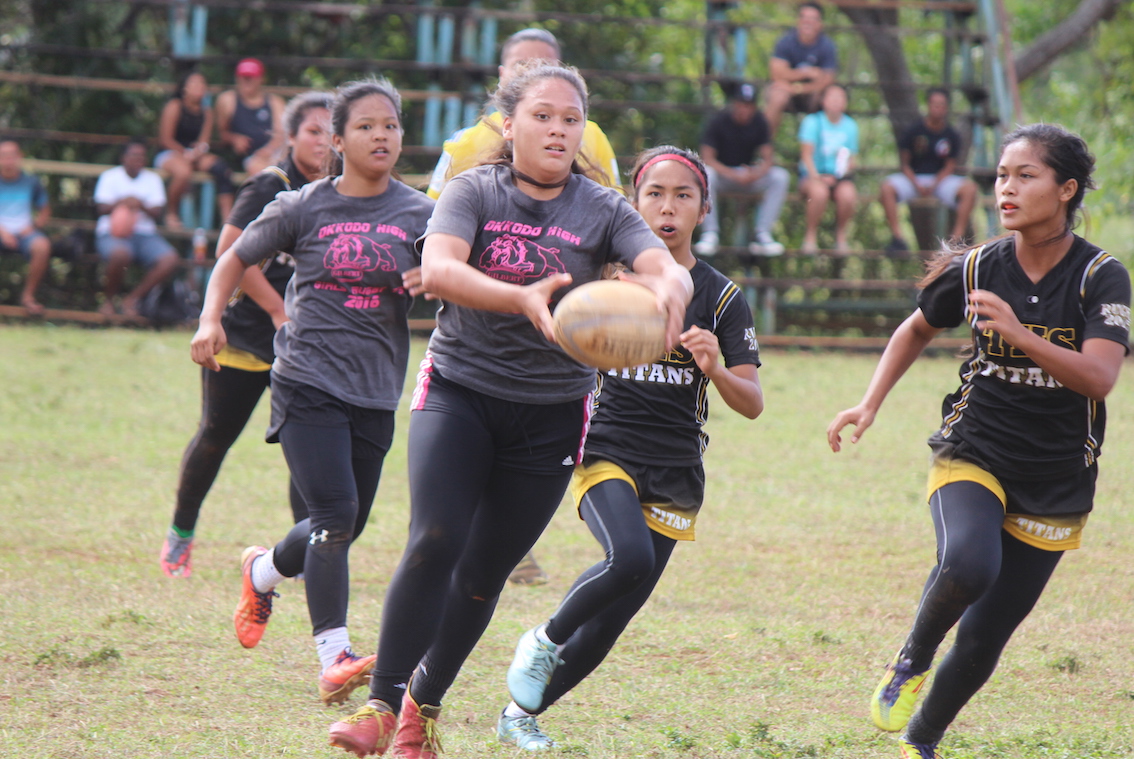 IIAAG high school rugby action continued at Wettengel Rugby Field in Dededo this weekend, where the Okkodo Lady Bulldogs , despite playing strong in their opening game, gave an uneven performance. After a sound victory over the Tiyan Titans, the Bulldogs came out flat against JFK and only managed one score on their way to a draw.

The Bulldogs have been steadily building their rugby program under former Guam national player Tiffany Tallada, and Andrea Gera.

“Our team is very close,” Gera said, “we always coach them to think of each other.”

In sevens rugby, with the limited number of players on the field, that chemistry can create a strong foundation for team performance, as well as a stepping stone for the younger players to grow in the sport.

The Bulldogs’ comradery is something that has transcended the field, as the team maintains close bonds away from the game. “Overall… this team is a close family,” Tallada said, “they play with heart.” A strong point for Tallada’s coaching success has been her support of the players, an attitude that carries throughout the squad. “I tell the girls that as long as they play their best, we can take the loss,” she said.

In the opening match against Tiyan, Leeza Vahilig raced 60 meters out of a scrum for an early try. From there, the Bulldogs defense lived up to the image of their team name, as they hounded their opponents and bit off every chance they could. Jacia Vita and Caitlyn Cabrera each created scoring opportunites from their tackles, poaching the ball and giving senior winger Celine Amparo room to score. Despite a yellow card, the Bulldogs maintained composure and finished with a final score of 20-0 against the Titans.

In their second game, the Bulldogs appeared uncharacteristically flat and, despite a fine score from Amparo, only managed a draw with the JFK Islanders.

Amparo, a 4-player player under Tallada has echoed her coach’s message to the team. “We just try to communicate with each other… to stay on the same level and help each other out,” she said, “we have a great bond off the field.”

“Celine’s been a great player for me for the last four years,” Tallada spoke of her captain, continuing on highlight Amparo as a very smart player who’s leadership is felt throughout the team.