The success story of former Guam native and current 17-year-old De La Salle, California wrestling star Donovin Guerrero could easily have gone differently had he chose to give up wrestling after struggling during his first two years. His passion for wrestling, his family and his island have fuelled a list of growing accolades for the young star. 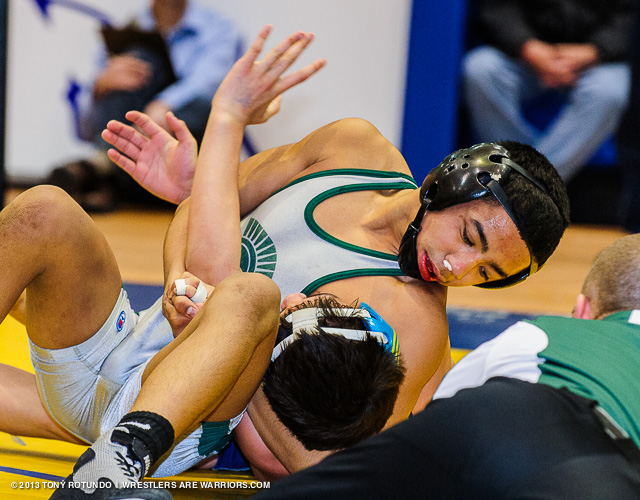 The success story of former Guam native and current 17-year-old De La Salle, California wrestling star Donovin Guerrero could easily have gone differently had he chose to give up wrestling after struggling during his first two years.

After tallying just two wins in two years since beginning his wrestling career at 5th grade, Guerrero has since become one of California’s top wrestlers and one of the nation’s top young prospects.

“My dad urged me to stay in and so I did. I became passionate about the sport, embraced the grind and hard work, and later fell in love with the sport. Now I’ve become very successful,” said Guerrero on when his early wrestling life.

Success came in many forms for the young 120 lb. wrestling star who’s list of accolades continues to grow.

Guerrero’s last visit to Guam was in 2014 since moving to the states from Guam when he was four years old. Though he hasn’t grown up on Guam, representing the island he still calls home is still very important to Guerrero who’s known as ‘island boy’ around his current teammates.

‘Island Boy’ is also the name of Guerrero’s father Dwayne Guerrero’s clothing company which he proudly sports all year long. His father is from Merizo and his mother is Josette Cruz of Agat with his parents family all still living on Guam.

“My parents are very traditional and really teach us all about our culture. Everywhere I go, I compete and represent my family and my island. I always use something that has Guam on it when I compete in all of my events,” added Guerrero. “Leaving all my family was hard, but we still keep in contact with each other through FaceTime and phone calls.”

“Those are big dreams, but I’ve always dreamt of doing these things while representing my island,” said Guerrero.

Guerrero grew up playing a variety of different sports but didn’t find the passion to succeed as much as wrestling drove him to.

During Guerrero’s last Guam visit he trained with Southern High and GW while also forming bonds with the wrestlers and coaches, of which he still keeps in contact with to this today. He was also able to hit the mats with Guam’s former Olympian Maria Dunn.

Guerrero is also fully aware of Guam’s current MMA stars like Jon Tuck, Baby Joe Taimanglo, Jon Delos Reyes, and Kyle Aguon and keeps up with the island’s talents away from home.

Guerrero was recently invited to Budapest, Hungary to represent USA in a Junior Fila competition between 10 different countries in Europe. Guerrero stated he will accept the invitation and is set to engage in a week-long training camp with the Hungarian Senior level team in April.

Guerrero’s final year competing at De La Salle is full of aspirations to bring in the State Title at 120 lbs. to his school Spartans. He also has a younger brother Dwayne Guerrero, who is ranked 24th in the state at 113 lbs., who is ready to compete in his first year of high school wrestling.

Donovin Guerrero aims to be the best at 120 lbs. during his senior year of high school, and one day the best 120 lb. wrestler in the world. (courtesy photo)