The third-seed Academy Cougars brought the sticks against the second-seed Guam High Panthers Wednesday evening with a 14-3 win, dropping the Panthers into the losers bracket of the double-elimination playoffs at the Okkodo Field. 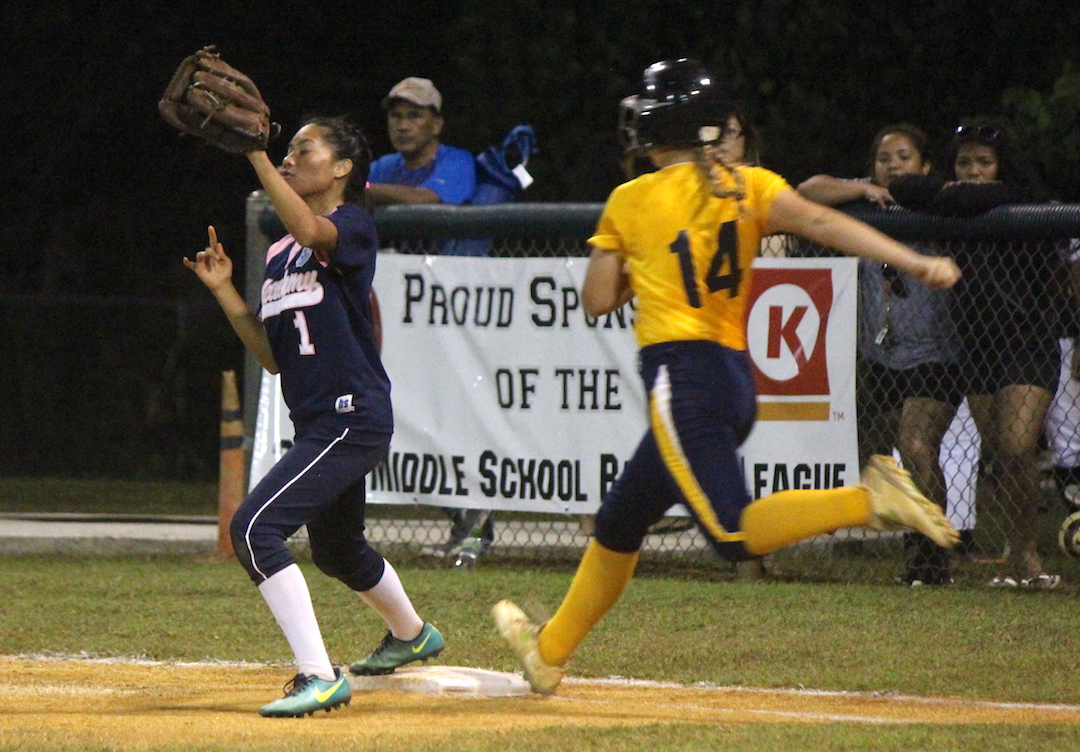 The third-seed Academy Cougars brought the sticks against the second-seed Guam High Panthers Wednesday evening with a 14-3 win, dropping the Panthers into the losers bracket of the double-elimination playoffs at the Okkodo Field.

Cougar pitcher Ashley Mendiola ended the night with 4k’s in the win and Panther Abby Mravlija takes the loss ending with 2k’s.

Academy posted two in-the-park homers in the game with one coming from slugger Juliana Nelson in the 6th inning and one form left fielder Rhia Pangindian in the 7th inning.

The Cougars wasted no time by taking a comfortable 6-1 lead through the first three innings. Nelson and Pangindian cashed in RBI’s in a part of the Cougars run to put the pressure on the Panthers.

“We know that offense wins games so we know what needed to be done today and that first inning was big,” said Nelson on the start.

A strong offensive game was part of Pangidian’s big night, but she also had a pair of key snags from the left field that denied much needed runs for the Panthers.

The Cougars were rocking a 7-1 lead in the bottom of the 5th inning. Mendiola let a few pitches get away from her, walking a pair of Panthers to eventually load the bases. Guam High got a big shot that went deep left, but Pangindian was all glove on the play, snagging a would-be dangerous ball.

“We have to be prepared for anything and always be on our toes. We should never be too stationary,” said Pangindian on her defense.

Wendy’s Players of the Game Julianna Nelson and Rhia Pangindian.

The Panthers still managed to score two runs in the inning to get within 7-3.

Academy responded in a big way in the 6th inning and Panthers Mravlija started to struggle. Mravlija loaded the bases with two hit-by-pitches and Cougar Doriaun Calvo registered an RBI on a fielders choice, with another run brought in due to a Guam High confusion for a 9-3 lead.

Nelson then smacked a deep ball to through the center that led to her two-run homer. The Cougars stormed from the dugout as they took an 11-3 lead to congratulate Nelson at the plate.

“I had faith in the Panthers to make a play on the ball, and it could’ve been the wind or weather, but either way I’m happy that I got it,” laughed Nelson on her homer.

Guam High attempted to get a run going to counter the Cougars big 6th, but Emma Sheedy’s lead single would be the only hit registered in the inning.

Academy added more to their large lead with Pangindian’s three-run homer that also warranted a collection of cheers from the entire Cougar squad at home.

“I had no idea, but I know that when I’m at the plate is when I have the best chance at scoring or brining runs in. I know I need to bring it all for my team,” added Pangindian.

Due to the double-elimination format, the Sanchez Sharks and Guam High Panthers will play for survival on Saturday while the JFK Islanders and Academy Cougars await their opponents.

The Guam High Panthers will play the Southern Dolphins Saturday morning for survival while the Sharks will face the Geckos.