It took two and a half hours and a late rally for the JFK Islanders to up-end the Sanchez Sharks on Wednesday night. JFK defeated the Sharks in the winners bracket 15-10, with the playoff format being double-elimination. 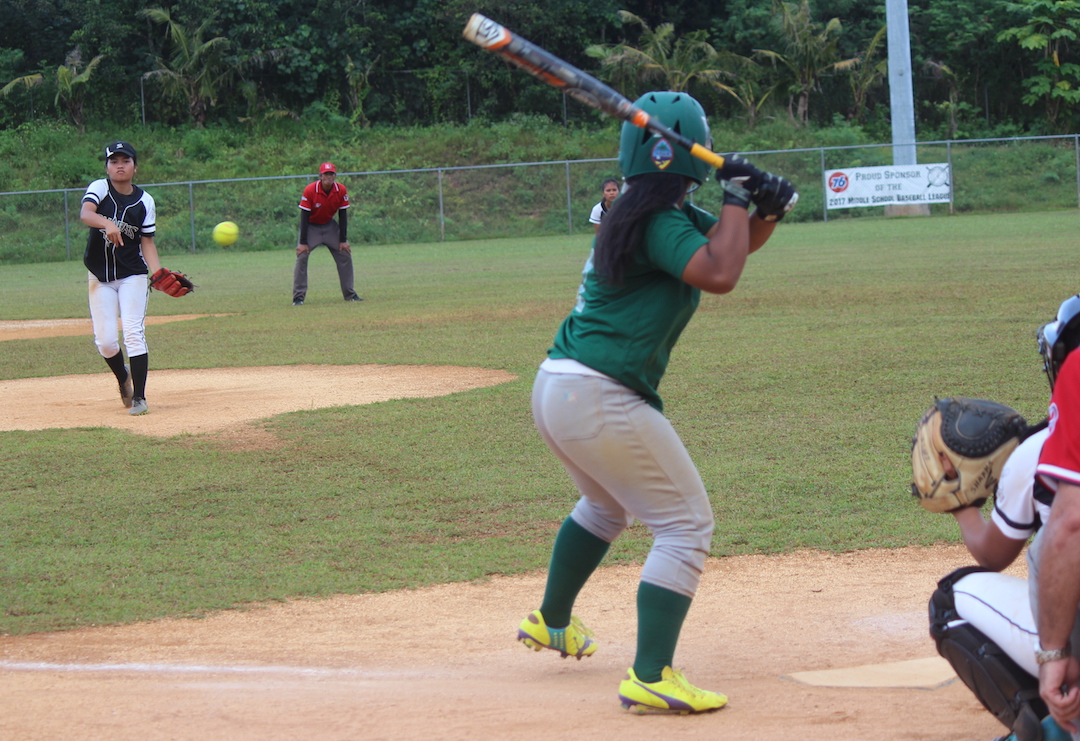 It took two and a half hours and a late rally for the JFK Islanders to up-end the Sanchez Sharks on Wednesday night. JFK defeated the Sharks in the winners bracket 15-10, with the playoff format being double-elimination.

The Sharks had a small two point offensive effort in the top of the first inning. These two runs were made possible by Lovlana Diaz, who hit an RBI double, which gave Paige Aguon and Sharika Cabrera a chance to take home plate. These were the only runs produced by the Sharks in the first inning.

JFK scored two runs themselves came their turn to bat. Neither of the runs were produced by hits, however. The first Islander run was scored when Olivia Irias was hit by a pitch from Sharika Cabrera. This shifted the loaded bases around, letting Emani Guitterez take home, she was previously walked by the pitcher.

The other run was also the result of another rotation. Vianka Leon Guerrero was also walked, letting the Islander on third base, to take home. This tied things up at two at the end of the first inning.

In the entirety of the second inning, there were no runs produced, as both defenses crushed the opponent’s offensive effort.

The Sharks started to get fired up in the third inning, scoring a total of four runs. Three of these runs came from an RBI triple hit by Lovlana Diez, who made it to third after deciding not to go for home in what would have been an in the park homerun. The fourth run came from Bumlanglag after hitting a sacrifice grounder to let Diaz take home. The score was now 6-2, Sharks with a small lead.

The Islanders wouldn’t give up, however. They scored another two points in the bottom of the third inning. One of them came from a sacrifice hit and the other came from an RBI single.

The fourth inning was when the Islanders were dialed in, a pair of USAF F-15s flew over the park, followed by amazing defensive strategies from the defense. No hits were allowed in the top of the fourth inning.

This also marked the start of the rally of the Islanders. The first run of this inning was produced when Nyah Chamberlain stole home plate after a wild pitch was thrown by Cabrera. Another run was scored when pitcher Pillar George hit an RBI triple, allowing Emani Gutierrez to take the plate.And the last run was when Pillar George was batted in by Olivia Irias. The score at the end of the fourth inning was 7-6, JFK with a one point lead.

The Sharks tied it up again in the top of the fifth, after Sharika Cabrera scored after she was batted in. This made the score 7-7.

The Islanders reacted to this tie with another highly offensive team effort, again, led by Pillar George, who hit an RBI double, allowing two girls to take the score. The third run came from an RBI single hit by Irias, letting George to take the scoring opportunity. And the last run of the inning came off of a loaded bases rotation after another walk. That burst of offense made our score 11-7, Islanders with a convincing lead.

The last four JFK runs were scored in the sixth inning. Two of these were a result of stolen homes from Emani Gutierrez and Pillar George. The other ones came from an RBI double hit by Vianka L.G. The score was 15-7.

The Sharks scored three runs of their own in the seventh inning, but it was enough to get past the high flying Islanders.

“My team helped me out and they were able to put me up to the game I should be playing and they helped my composure,” said pitcher Pillar George after the Islander rally. George finished tonights game with two RBIs and three stolen bases, she also pitched a complete game, winning the Wendy’s Player of the Game.

The final score from the Okkodo field was 15-10, JFK winning a thriller.

The Sanchez Sharks will face the GW Geckos Saturday morning.