With just four players left for the entire overtime period, the Harvest Eagles found a way to pull out a 79-74 over the hot team Tiyan Titans during Tuesday nights IIAAG boys basketball action. 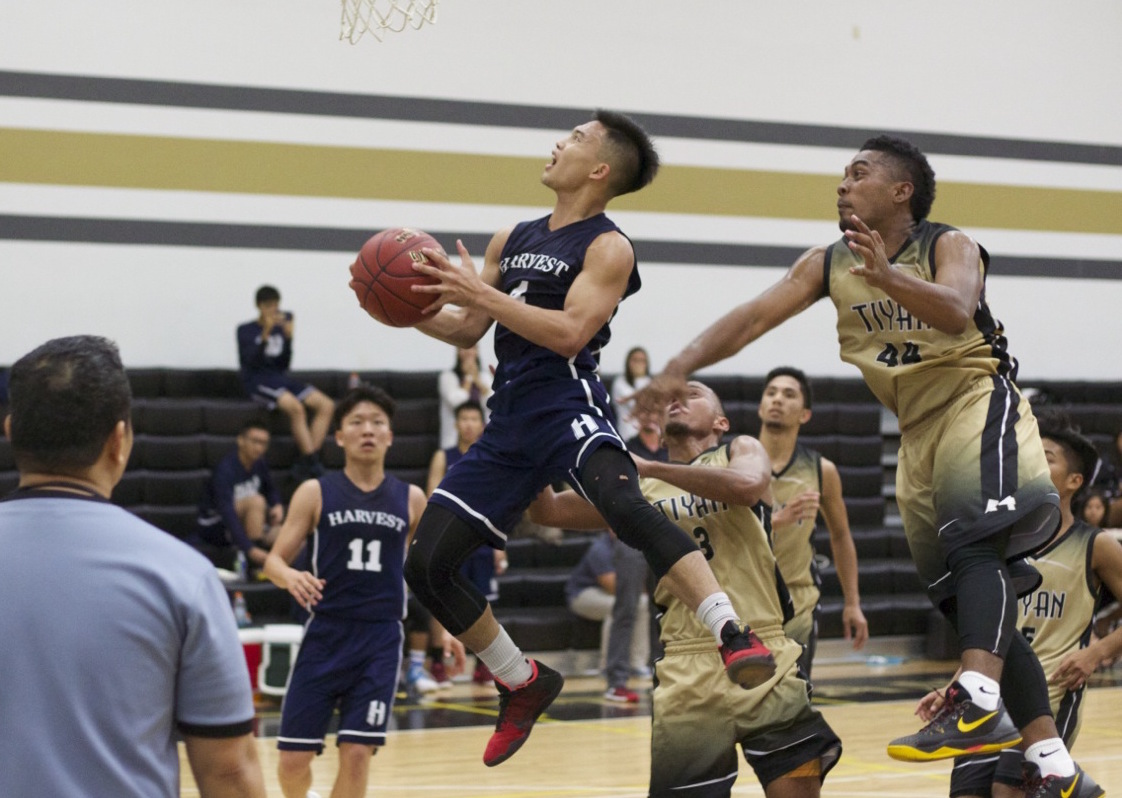 With just four players left for the entire overtime period, the Harvest Eagles found a way to pull out a 79-74 over the home team Tiyan Titans during Tuesday nights IIAAG boys basketball action.

“We knew that we were down a man, but we took it upon ourselves to finish strong. We pushed through our mistakes and got the ‘W’,” said Sotelo.

Tiyan battled back from a 35-18 deficit late in the 2nd quarter to eventually take a 65-60 lead in the final three minutes, riding a second half rally.

Eagle Ben Tevid picked up his fifth and final foul late in the 4th period, giving Harvest just four eligible players while down 68-67. Harvest had already lost Jacob Oshiro and Jiandong Lin in the quarter after both picking up their fifth and final. The foul sent Titan Franklin Taijeron to the line where he made just the second free throw for a 69-67 lead.

With just 12 seconds left in the game, Sotelo drove down the length of the court and dished the ball off to teammate Rod Wu, who tied the game with a layup to force the overtime.

In the overtime, it was the Eagles who would rally with six straight points coming from Sotelo and Daniel Villanueva. The red hot three-point shooting from Tiyan in the second half ran out of steam in the overtime period with the Titans getting just one of their five attempts to go.

Sotelo put the game out of reach at the free throw line leading 79-71 before Titan Johnsy Hagel converted the teams only three pointer in the overtime, ending action at 79-74.

The Eagles were soaring in the first half with the leagues leading scorer in Sotelo (23 points per game) distributing the ball to teammates Tevid and Oshiro for eight points each as they enjoyed a 38-22 lead.

“Tiyan was focused on me, they put me in a box-in-one, so I knew that the double-team meant one of my teammates was open. I also just had to be aggressive to score when I had the opportunity,” added Sotelo.

Tiyan pulled their best impression of the New England Patriots as they stormed back with long range shooting. Titan Richard Santos cut the once double-digit lead to just 45-36 with 1:37 left in the 3rd period which ended in a J. Paras bomb at the buzzer. Paras’ shot brought Tiyan within 47-41.

Hagel opened up the 4th quarter with a three-pointer from the left wing that got the erupted the Titans bench. Last Made gave the Titans their first lead with a three of his own at the 5:45 mark, going up 52-51. The Titans aggressive stance on defense allowed the Eagles to shoot 21 free throws in the final period alone with 13 points coming exclusively from the charity stripe.

“We weren’t playing discipline,” said Sotelo on allowing the Titans back in the game. “But us being aggressive allowed us to get fouls.”