ENRIQUEZ LIFTS BULLDOGS TO WIN IN PLAYOFFS FIRST ROUND

Shannon Enriquez was on fire in the opening round of the IIAAG boys basketball playoffs helping the ninth-seed Okkodo Bulldogs eliminate the eighth-seed Harvest Eagles 70-57 Tuesday night at the Harvest gym. Enriquez had his best game of the season, scoring 36 points to help the Bulldogs to advance to the Elite eight. 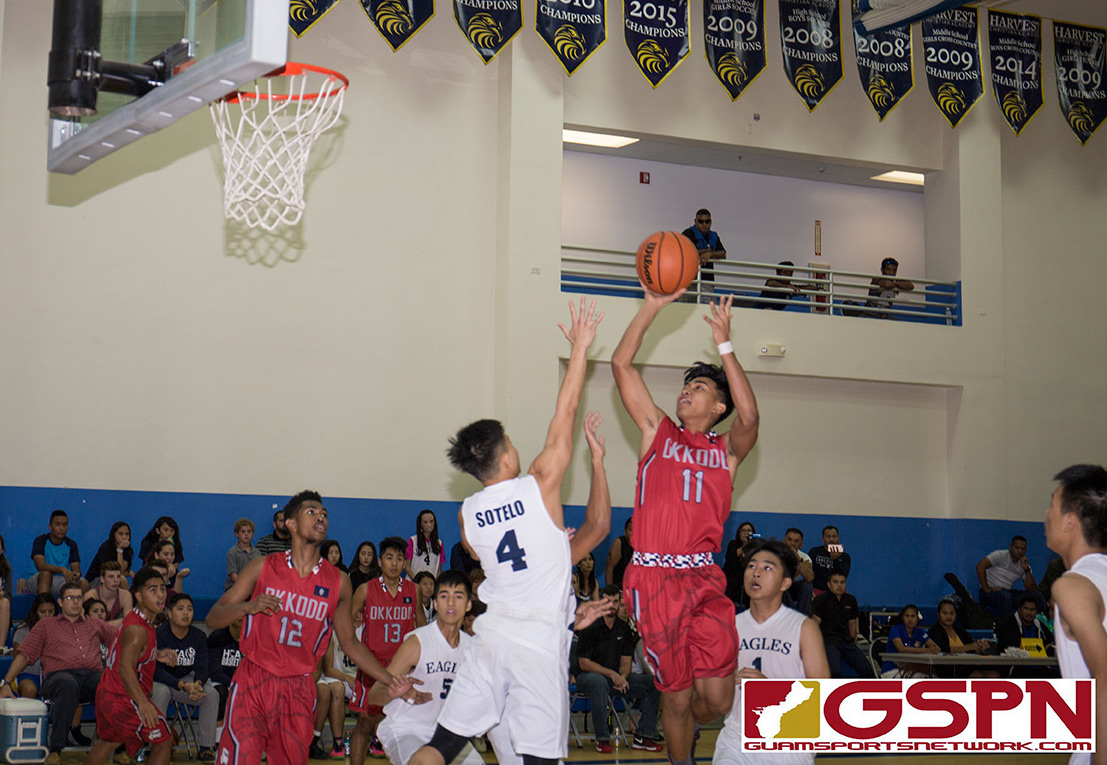 Shannon Enriquez was on fire in the opening round of the IIAAG boys basketball playoffs helping the ninth-seed Okkodo Bulldogs eliminate the eighth-seed Harvest Eagles 70-57 Tuesday night at the Harvest gym. Enriquez had his best game of the season, scoring 36 points to help the Bulldogs to advance to the Elite eight. The Bulldogs will face the undefeated St. Paul Warriors on Friday at 6pm at St. Paul.

The Bulldogs were ahead 26-23 at halftime but watch their lead disappear after the Eagles scored six straight points to open up the third period. The league’s scoring champion Kobe Sotelo scored four of the Eagles’ six points to open up the third quarter to take a 29-26 lead which prompted Okkodo head coach Desmond Mandell III to burn an early timeout.

The Bulldogs came out swinging after the Harvest run going on a phenomenal 20-0 run to close out the third quarter, seizing momentum with a comfortable 46-29 lead going into the final period.

“We worked on looking for each other (for open looks) during practice,” said Enriquez.

Okkodo guard Jonas Oyardo was huge during the run, hitting a pair of three-pointers to ignite the team. Enriquez followed with a three-point basket of his own to add fuel to the Bulldog fire.

The Eagles couldn’t buy a bucket during the Okkodo run, missing lay-ups as Bulldogs pushed the pace with momentum and confidence on their side. Okkodo’s Michael De Leon and Athan Arizanga were the recipients of transition baskets to close out the quarter with a 17 point advantage.

With the season on the line, Harvest seniors JD Lin and Sotelo hit big shots beyond the arc to cut the deficit to 10 points in a New England-esque type comeback that got the Bulldog fans biting their nails. The Eagles showed full court pressure and managed to force four turnovers to cut the lead to 10 points with three minutes left in regulation.

Another timeout was burned and the Bulldogs closed the door on the comeback with Enriquez scoring an ‘and 1’ basket and Arizanga making two big buckets in the paint to add insurance baskets after the two minute warning.

The game was out of reach with less than a minute remaining for Eagle head coach Stephen Yates as he subbed out Sotelo and the rest of his seniors as the crowd of both Eagle and Bulldog fans applauded. Sotelo ended his high school career with a team high 32 points, five steals, four assists and four rebounds.

Lin chipped in eight points for the Eagles, James Jeung scored six points off the bench.

“When we were down in the third quarter, Coach (Mandell III) told us to relax and be patient on offense and our shots will eventually fall. We started to gain confidence and the shots started to fall in our favor,” said Oyardo.

The St. Paul Warriors were in the stands watching closely, they will face the Bulldogs in showdown on Friday. The Bulldogs nearly upset the Warriors in the regular season, Okkodo was ahead after three quarters but lost 69-59 on January 31st.

“We are going to go into our next game with a strong mindset and not let anyone bring us down. We will need to capitalize on playing good team defense,” said Enriquez.

Here are the scores from Tuesday night:

The Southern Dolphins adanvce to the elite eight with a 75-69 upset victory over the GW Geckos. Phil Jardelleza had the hot hand with 24 points for the Dolphins. GW’s Ken Brozo led the Geckos with a game high 34 points. The Dolphins will travel all the way up to Yigo to play the third-seed Sanchez Sharks on Friday at 6pm.

The fifth-seed St John’s Knights advance to play the fourth-seed Guam High Panthers in the second round after defeating the ND Royals 84-39. The backcourt duo of Michael Min and Takumi Simon combined for 40 points, Gaven Leon Guerrero from ND scored 20 points for the Royals. The St John’s vs Guam High Panthers will be a showdown at Guam High on Friday.