It’s been a welcome rest week for the GW Geckos girls soccer team after picking up their fourth straight win (4-0) of the IIAAG girls soccer season during a Saturday showdown with the St. Paul Warriors. 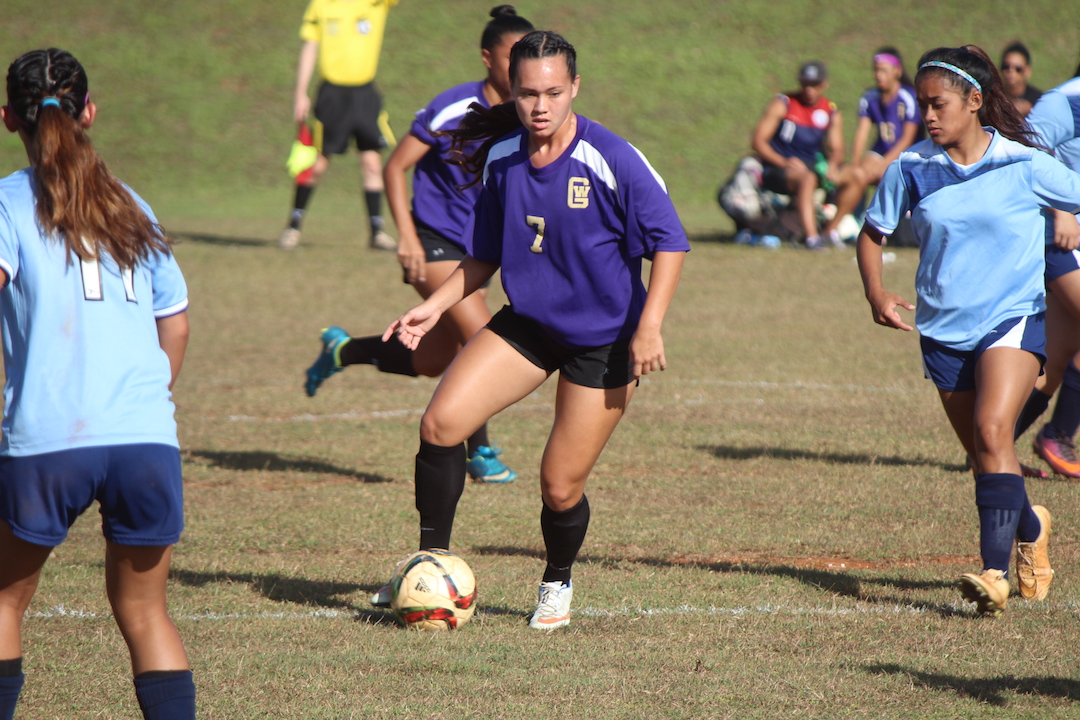 It’s been a welcome rest week for the GW Geckos after picking up their fourth straight win (4-0) of the IIAAG girls soccer season during a Saturday showdown with the St. Paul Warriors. The visiting Geckos blanked the Warriors 4-0 with the team hitting the field for the first time since Wednesday’s win over the Tiyan Titans.

Even without prominent scorer Jalana Garcia, the Gecko offense was smooth sailing after Colleen Naden found the back of the Warriors net twice along with a score from Autumn Cruz and Skyylerblu Johnson.

“Missing two of our starting 11 gave us a little problems because we had to switch everyone around. I feel like we did good, but we could’ve done better. The field wasn’t the best to play on either,” said Johnson on playing conditions during break.

GW wasted no time after Naden took the opening kick through the Warriors defense, scoring the games first goal in just the 2nd minute of play.

Cruz hit a sniper of a shot moments later from nearly 20 yards out, giving GW the early 2-0 lead.

After halftime, the GW offense remained in attack mode with Johnson getting within breathing distance of Warriors keeper Joniah Siguenza, netting the teams third goal in the 43rd minute.

Naden then put the finishing touches on the evening by racing down the right sideline past two Warrior defenders, using her right foot from the right corner to cross a pretty goal through the left corner of the end zone in the 61st minute.

Naden and Johnson have been teammates everywhere other than in high school. From outside league and nationals to dominating the IIAAG, the Naden’s addition to the Geckos this season is a dream come true.

“Having her out there really takes a lot of weight off my shoulders. We’ve always wanted to play one season together so we work really well out there. I like how we naturally connect and read each other. We both have the same goal which is to win a championship,” added Johnson.

The Warriors were knocking on the door of a goal on four key situations, two nearly coming from lead defender Tiffany Lopez on free kicks. Chloe Miranda almost gave St. Paul their first points of the contest late in the 2nd half as she appeared to break away from the GW defense, but Gecko defender Callia Concepcion swooped in at the last second to keep Miranda’s shot off-balanced.