The St. John’s Knights earned their first win in the IIAAG Girls Basketball League with a 51-33 victory over the JFK Islanders in the regular season game played Friday night at the JFK gym. 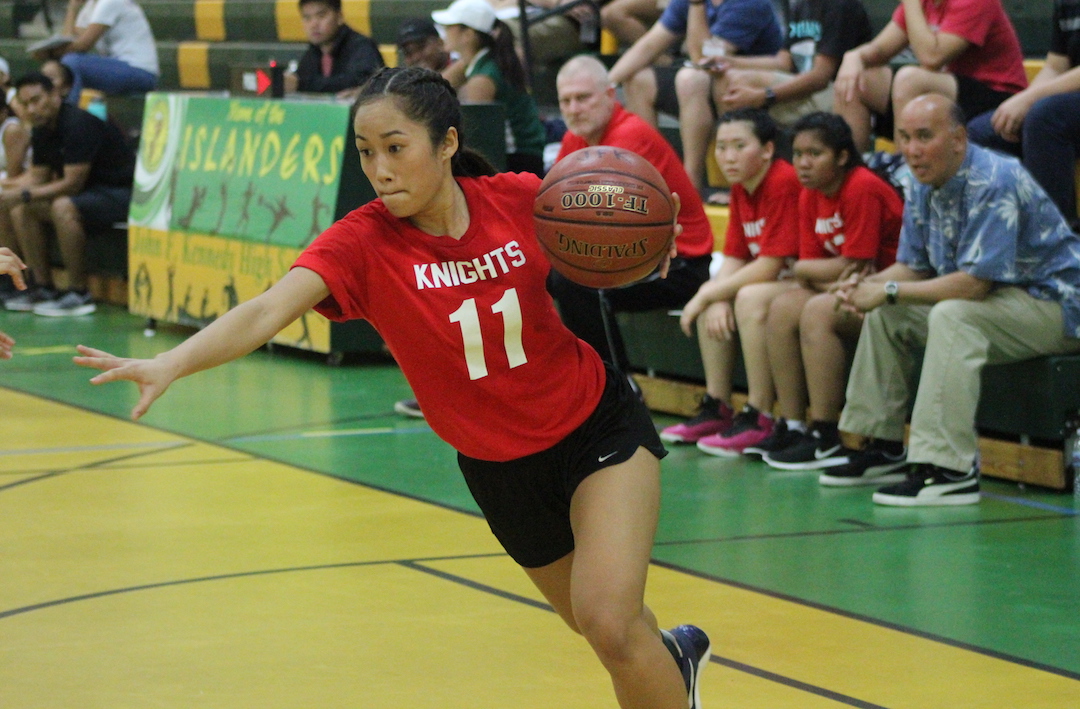 The St. John’s Knights earned their first win in the IIAAG Girls Basketball League with a 51-33 victory over the JFK Islanders Friday night at the JFK gym. Jenna Han was on fire, torching the nets with a game high 27 points to help the Knights improve to 1-3.

“After losing our first three games of the season, we wanted to come out aggressively and get this win. It was a team effort; we each did what we were supposed to do,” said Han who also dished out four assists.

JFK scored the first basket of the game with guard Keana Camacho getting a steal and taking it coast-to-coast to go ahead 2-0. Han answered immediately with a strong drive to the basket to put the Knights on the board.

The Islanders started to find some rhythm with Jazzy Yeban and Kenna Ardiente scoring in the second quarter. The Islanders looked to take some momentum with them into halftime but the Knights got a basket from Caitlyn Niu and a long jumper at the halftime buzzer from Erin Wang to go up 23-11.

JFK needed to find their offense in the second half but were still unable to make baskets. On the other side of the court, the Knights were executing on plays drawn up by St. John’s head coach Fred Peters to increase their lead to 38-23.

Camacho pushed the pace on offense for the Islanders to cut the lead to 12 points in the final quarter. The Knights answered and increased their lead to 20 points with their forwards stepping in to make baskets. Wang, Pin Hsuan Chen and Niu each scored in the final period to help the Knights earn their first victory of the season.

“We were more determined coming into this game. Our team has less amount of players (7 total) than most other teams and we used that to our advantage. With a small team everyone knows their roles and strengths,” said Niu.

Camacho led the Islanders with 12 points, five rebounds and two steals. Ardiente had seven points; Kiyomi Yamaguchi had four points and seven rebounds for JFK. The loss drops JFK to 2-3 for the season.

In other games, the St. Paul Warriors defeated the Tiyan Titans 60-18 to remain undefeated. Haley Senne led all scorers with 20 points.

Keana Camacho races down court for a fastbreak bucket. (photo by Robert Balajadia)

The Islander defense stands up Aileen Tseng on the drive. (photo by Robert Balajadia)

Knight Jenna Han dishes a pass to Erin Wang for one of her four assists. (photo by Robert Balajadia)

Islander Francine Villena attempts a shot from the post. (photo by Robert Balajadia)