This past Sunday the sixth round of the 2017 Monster Energy Guam Motocross Championships was held at the Guam International Raceway in Yigo. Gates at the raceway opened at 8am free for the public to enter and enjoy witnessing a full day of the thrills and spills of close motorcycle and atv racing island style. 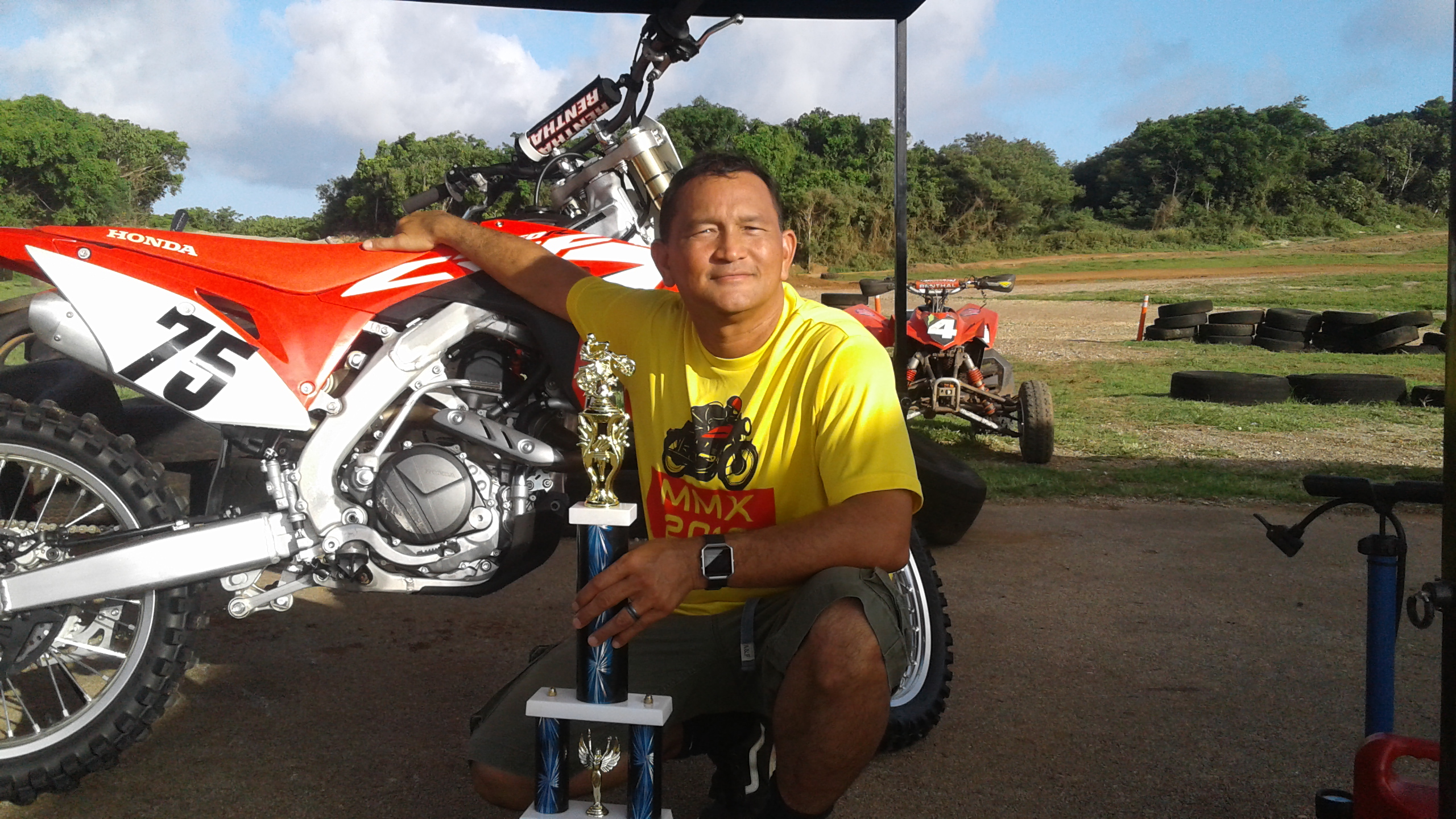 This past Sunday the sixth round of the 2017 Monster Energy Guam Motocross Championships was held at the Guam International Raceway in Yigo. Gates at the raceway opened at 8am free for the public to enter and enjoy witnessing a full day of the thrills and spills of close motorcycle and atv racing island style.  The course layout for the sixth round was challenging and had our island racers in all the many classes ranging from the 50cc kids mini classes all the way up to the full sized machine of the open motorcycle and atv classes on their feet flying high and banging bars.

When the Monster Energy Rocky Mountain Precast starting gates dropped for the start for the first of two heats of the highly competitive Open Motorcycle class it was the #31 Tim Wenden aboard his Ktm taking the lead over the field of fifteen. Wenden was closely followed throughout the course for the first few laps by Umatac’s own #389 Shane Morrison aboard a Rpm Yamaha supported machine. At the end Wenden aboard the Ktm managed to pull away and put some distance on the rest of the field as he took the heat one win with Morrison on the Yamaha in second and “little John Aguon in third.

Heat two saw the #86 Yamaha of Mike Uribe railing the first turn off the start and pinning the throttle over the fifty five foot in length table top jump. Uribes jump saw him nearly fifteen feet high and sailing for over sixty feet to take the early heat two lead. Following Uribe and challenging was the heat one winner #31 Tim Wenden who was looking as if he wanted to waste no time in taking over the lead. Rather quickly the #31 Ktm of Wenden made the move into first followed closely by the looking on fire Yamaha of #18 “little’ John Aguon and the #389 of Shane Morrison.

“little” John wasn’t allowing the #31 of Wenden to pull away and was putting a lot of pressure on the heat one winner. Going into the last few laps the two front runners of Aguon and Wenden were battling wheel to wheel and had the race fans on their feet shouting out in their support for their favorite rider for whom they wanted to have take this heat two win. Sailing over the finish line jump for the checkers for first was once again the #31 of Tim Wenden for a round six sweep. Taking second in the heat and overall was the #18 Yamaha of “little” John Aguon with the #389 Rpm Yamaha supported rider of Shane Morrison taking a third in heat two and a third place overall for the round.

With his sweep the #31 of Tim Wenden takes over the Open Motorcycle class championship points lead with 249 points over “little” John Aguon who sits in second with 241 points. Reigning and multi time champion JR Cepeda falls from first in the standings to third with 211 points after not competing in the round.

Getting out to the early lead in heat one of two was the current  championship Open Atv points leader #7 Matt Taimanglo aboard a Yamaha with #11 John Gilman also aboard a Yamaha right behind the leader in second and with the #15 Kawasaki of Albert Garlit in third. Midway into the heat Taimanglo had pulled away and was up front controlling the lead with the #4 Robert Bucek aboard a Cycles Plus Suzuki moving his way up into second from a fourth place start.

The next several laps saw a tight paint swapping battle between Taimanglo and Bucek with both riders going back and forth with the lead. Bucek was able to eventually make a block pass on Taimanglo stick and was able then to pull away for the heat one win. Taimanglo took second with Gilman third.

In heat two it was the #15 Kawasaki of Albert Garlit that rocketed out into the early lead with the #7 of Taimanglo in second and the #4 of Bucek in third. Bucek made a quick move past Taimanglo when Taimanglo over shot the inside of a tight turn that followed a technical double jump. Bucek then looked to have set his sights on the #15 of Albert Garlit who had pulled away into the early lead. Once again it looked as if paint was going to be traded as the #15 of Garlit refused to bow down to the relentless attacks from the Cycles Plus Suzuki rider.

Bucek was taking rocks to the chest that were being shot out as if from a canon by the big 450 motor of Garlits Kawasaki as he chased the leader. The pass on Garlit was important for Bucek and if made would reward him the points to move into the championship lead. By the midway Bucek made the pass that finally would stick allowing him to pull away for the heat two win and the overall. Taimanglo also did battle with Garlit and made the move to take second with Garlit placing third. Fourth was #11 John Gilman with Rosie Castro taking Fifth on her Yamaha. With his round six sweep Bucek takes the championship points lead by a single point with 219 points over the #7 of Matt Taimanglo with 218 points. Third in the points is rookie rider #22 Rosie Castro with 152 points..

In the Over 40 Vet class #75 Jeff Rios aboard his Honda supported by Autoworks took the win with the #51 Yamaha of Frank Reese in second and Kawasaki mounted Larry Limtiaco taking third. Fourth went to John Aguon sr. with #83 Ceasar Whitt in fifth.

In the Schoolboy class #94 Jessthan Pano aboard a Kawasaki took the win with #112s Sasha Song in second.

In the Open Novice class #94 Jessthan took his Kawasaki to another class win with #21 Sade Pitter on her Pittshop supported Kawasaki in second and #901 Robert Terrel on his Yamaha in third. Fourth went to #24 John Aguon with #112s Sasha Song rounding out the op five.

In the 150cc class Owen Rios and #30 Sasha Song put on the bar banging battle of the day with Rios just nudging out Song for the win.

In the 85cc class #101 Arthur Manglona swept the class for the win with #76 Devin Encina taking second and #25 Laurence Limtiaco in third.

In the 65cc class Laurence Limtiaco swept the win in both heats with #31 Richard Wenden in second and #52 Dakota Concepcion in third. Fourth was #44 Nolan Minor, fifth was #222Kenneth Tedtaotao and sixth was #22 Wyett Santos.

In the 50cc class Jerisha Aguon took first with #3 Elle Maume in second. Third was #20 Jace Calvo and fourth was #18 Jon Agoun.

In the Mini Atv class #2 Wyett Santos dominated once again to take the win with Valance Minor in second and #7 Mia Taimanglo in third. Fourth was #27 Camerish Chaco, fifth was #22 Karter John and sixth was #222 Jordan Chargulaf.

The seventh round of the 2017 Monster Energy Guam Motocross Championships will take place on Sunday May 21st out at the Guam International Raceway. Racing starts at 11:30am and again the public is encouraged to come witness all the bar banging racing action free of charge. For more information including the full championship schedule along with practice and race heat schedules please visit and down load the GIRMAC Team App at https://girmac.teamapp.com/dashboard. Those seeking more information can also contact Public Information Officer Robert Bucek at 727-5381.