The Guam High Panthers faced off against the Sanchez Sharks at their home diamond in a Wednesday evening edition of IIAAG High School Baseball. 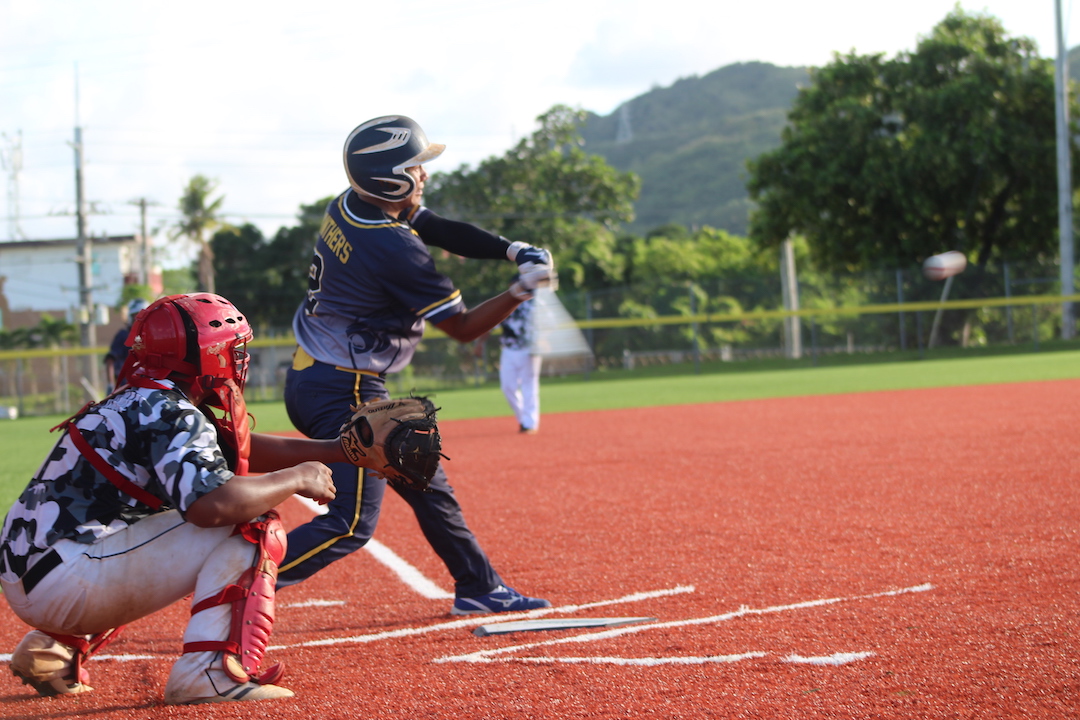 The Guam High Panthers faced off against the Sanchez Sharks at their home diamond in a Wednesday evening edition of IIAAG High School Baseball. The (3-3) Panthers defeated the (3-1) Sharks 14-4 in five innings, with the mercy rule in effect.

An impressive defensive effort by the Panthers kept the Sharks offense curbed and only gave up a total of four runs.

The Panthers quickly found a way around the starting Sharks pitcher, Damin Concepcion, earning a total of eight runs in the first inning alone. Most of these runs were scored by RBIs.

“I tried to keep it simple and just let the ball come to me,” Said Lim after his impressive RBI.

The Panther bats were on fire during the first inning as they earned a dominant eight runs. The first two runs came in when Gavin Gagucas hit an RBI single, which made the run to home plate possible for Brandon Tuguero and Gavin Lim. After this, an RBI double was batted in by catcher Brian Palacios, which increased the score to 3-0.

The fourth run was scored when Brian Mitchell was walked and moved each player to a new base. Joshua Duenas stole home, which made the score 5-0. Tuguero soon hit an RBI of his own: an RBI triple to deep center field, which brought in two more runs. The eighth run was scored after Gavin Lim hit a sacrifice fly. The score after this firestorm of offense was 8-0, the Panthers with a dominant lead.

The Sharks weren’t going to give up. Despite their trailing of eight points, Sanchez found their way on the board twice. The first score was an RBI hit by Thirstyn Franklin, who cleared the way for Sigi Sanchez to run home. The second one was a sacrifice pop fly swung in by batter Jerimiah Sablan. The score after this short burst of energy was 8-2, Guam High still on top. .

The Panthers scored two more runs in the bottom of the second inning, which were both from a set of RBIs. This put the Panthers in double digit territory with an eight point lead over the Sanchez Sharks. The score was now 10-2.

Sanchez scored their last two runs in the top of the third inning. Both were scored by Damin Concepcion. One was when he hit an RBI single, and the other was scored when he was able to steal home after a wild pitch. This brought them within six points of the Panthers, who quickly responded with two more points of their own with a pair of RBIs.

The bottom of the fifth inning was very exciting for the Panthers. This is because slugger Gavin Lim hit the game winning RBI double, which allowed runners Kaito Delasiearra and Brandon Tuguero to make one last slide into home, thus calling the game.

The Panthers won this Game 14-4 and are now 4-3 heading into their next matchup against the title defending GW Geckos.

“GW is a very good team and I respect the talent they have,” Said Lim, “we’ll just have to wait and see what happens when we go up against them.”

The Sharks are now 3-2 and will face off against the Tiyan Titans at Okkodo on Saturday morning.

Auron Eclavea tossed a five-inning no-hitter for the top ranked FD Friars in a 10-0 win over the Okkodo Bulldogs. Eclavea struck out six and walked one in FD’s second no-hitter in as many weeks.