The St. Paul Warriors handed the defending champion Okkodo Bulldogs their first defeat of the season with a 68-48 victory in the IIAAG Girls Basketball League to improve to 3-0 for the season. Last season’s MVP Haley Senne led the Warriors with a game high 33 points in the victory. 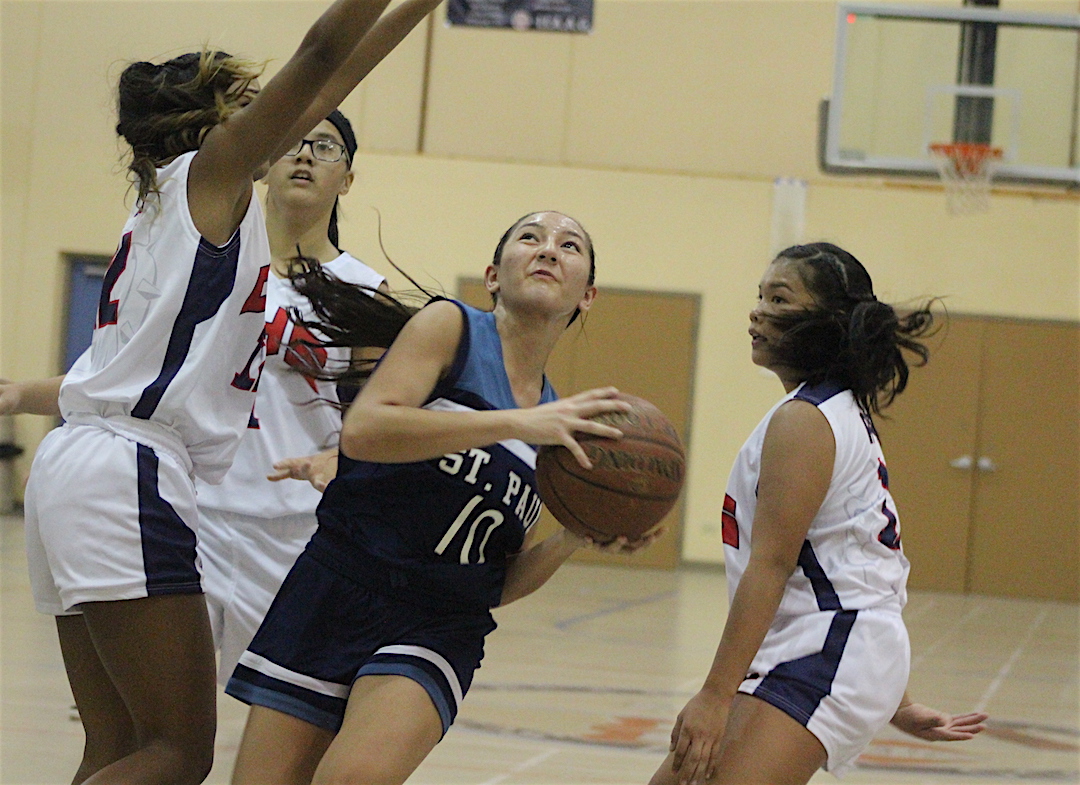 The St. Paul Warriors handed the defending champion Okkodo Bulldogs their first defeat of the season with a 68-48 victory in the IIAAG Girls Basketball League to improve to 3-0 for the season. Last season’s MVP Haley Senne led the Warriors with a game high 33 points in the victory.

“Our game plan for this game and every game of the season is to play hard defense. Coach (Paul Pineda) tells us good defense will lead to our offense and we executed tonight,” said Senne. The Warriors tallied 17 total steals for the contest.

St. Paul started the game leading 10-0 to stun the home crowd. Isla Quinata converted a driving lay-in from the opening tip and Niah Siguenza scored in the paint off a pass from Chloe Miranda to force the Bulldogs to call a timeout.

Raquel Camacho ended the run, swishing a 3-pointer to ignite the first cheers from the home crowd. The Warriors continued to press, forcing eight steals in the first quarter alone.

The Warriors closed out the half on a 10-2 run with Quinata and Siguenza scoring to go up 40-23 by halftime.

Henne scored seven early points after halftime as the Warriors went ahead by as much as 21 points. The Bulldogs cut the lead to 51-33 at the end of the third period with Dshanae Cruz doing work on both offense and defense.

The Bulldogs clawed back into the game in the fourth quarter with Cruz and Danica Cabrera scoring the first six points in the final quarter to trail 53-41. With the Warriors continuing the aggressive defense, the Bulldogs managed to draw fouls.

Okkodo was in the shooting bonus with the Warriors committing 10 fouls by the fourth quarter. Quinata fouled out of the game early in the fourth quarter, leaving Warrior coach Pineda with one less scoring threat.

The Bulldogs, led by head coach Arlene Mad, were unable to capitalize and were only able to shoot 50 percent from the charity stripe.

With less than three minutes remaining, Senne drains two mid-range jumpers and Giger converts the ‘and 1’ lay-in to end the Bulldogs chances for the comeback as they closed the game with the 68-48 victory. The Bulldogs drop to 3-1 for the season.

In the junior varsity game, the Warriors held on to defeats the Bulldogs 48-42. Jan Quintanilla was the leading scorer with 31 points. Anjonette Ponce scored 12 points for the Bulldogs. The Warriors remain undefeated and improve to 3-0, the Bulldogs fall to 2-1.

Warriors Niah Siguenza gets hacked on her way to the rim. (photo by Robert Balajadia)

Apatang finds herself open for a three-pointer in the first half. (photo by Robert Balajadia)

Dshanae Cruz makes a heads up play by knocking the ball way on a drive from Niah Siguenza. (photo by Robert Balajadia)

Warriors Isa Quinata escapes a trap at half court against her former team. (photo by Robert Balajadia)

Warriors Chloe Miranda dishes a ball to an open teammate on the wing. (photo by Robert Balajadia)