WARRIORS ADVANCE TO SEMIS WITH WIN OVER GECKOS

The St. Paul Warriors (16-1) stamped their ticket to the IIAAG Girls Basketball Final Four with a 61-33 victory over the fourth seed GW Geckos (10-7). 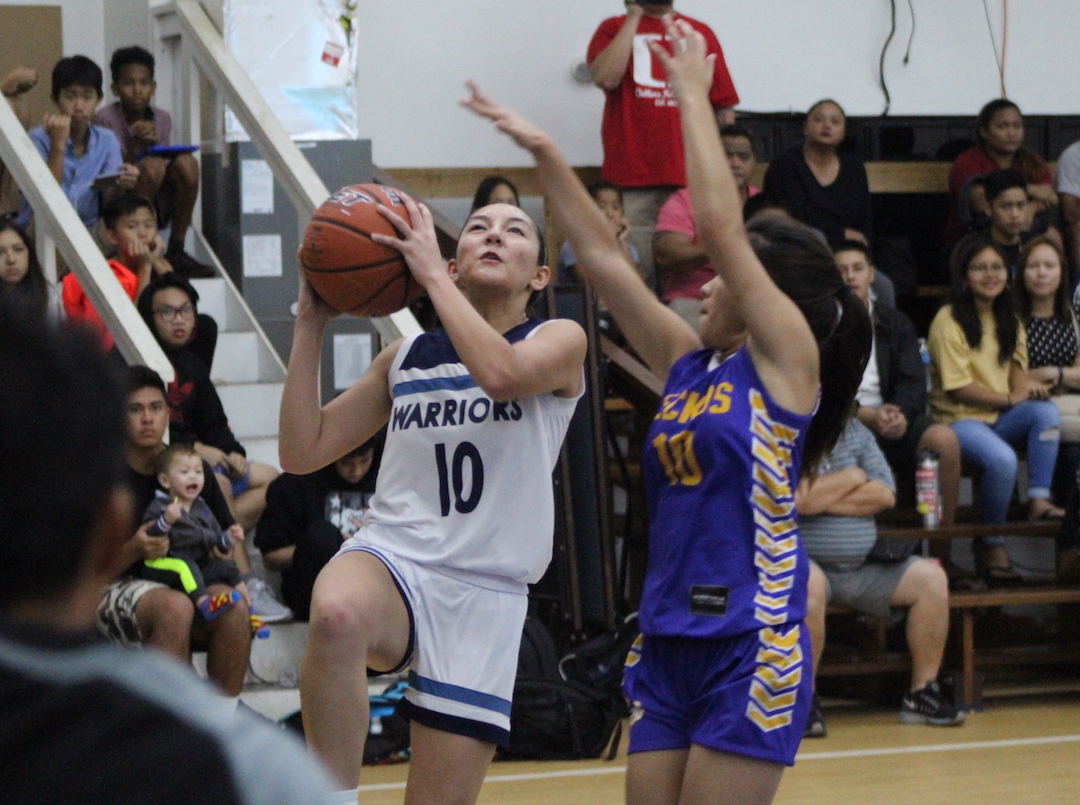 The St. Paul Warriors (16-1) stamped their ticket to the IIAAG Girls Basketball Final Four with a 61-33 victory over the fourth seed GW Geckos (10-7). Niah Siguenza and Haley Senne each scored 20 points in the victory for St. Paul to set up a much-anticipated rematch with the ND Royals next Tuesday in the semi-finals.

The Royals defeated the Warriors 61-55 on November 17th at ND. St. Paul is looking to erase their only loss in the playoffs at home next Tuesday.

“That loss to ND was our wake up call. Since our loss, we’ve been pushing ourselves even harder and I feel we will be more prepared for them,” said Siguenza. Siguenza, who was selected to the IIAAG all-island second team, had the game’s only double-double with 20 points and 14 rebounds.

“We watched some film and we made some adjustments especially on defense.”

“We are excited for our next game against ND. That loss really motivated the team,” said Senne. “We always work on defense but we need to be mentally strong and go into the game with more confidence.”

Senne added that the  Warriors were not focused in their earlier meeting at Notre Dame. The Warriors will now be on their home court; they are undefeated at home this season.

“Our defense is some we always work on, we need to play better defense against them.”

GW started the game prepared for the Warrior press, scoring quickly after breaking the Warrior press to go ahead 4-2. Mikayla Castro and Haley Banez scored early to give GW the slight advantage.

The home team would answer immediately with last season’s MVP Senne stepping up to start a huge run for St. Paul. The Warriors seized momentum  with Senne scoring 10 points to close out the quarter with 17-6 lead.

The home team continued to use their momentum and extended their lead to 32-16 by halftime. Siguenza had the hot hand in the second quarter, scoring seven points as the Warriors had a comfortable lead by the break.

The Geckos were unable to get their offense flowing as they continued to commit turnovers. GW committed 39 turnovers for the game and never got within a single-digit deficit despite late comeback heroics from Bila Aguon and Sheena Muna. Starting point guard Alana Salas was limited in playing time with foul trouble.

All-Island guard Isla Quinata from St. Paul did not shoot well from the field but still managed seven points, seven rebounds and four assists before sitting in the final period with the Warriors up comfortably. The Warriors won the battle of the boards against GW out-rebounding the Geckos 44-31. Despite the rebounding advantage, the Warriors were still unable to shoot well from the field (21-74) at 28 percent. St. Paul also did not make a 3-point basket.

Gecko Bila Aguon sends up a floater in the lane late in the second half. (photo by Robert Balajadia)

Warriors Niah Siguenza is met with heavy contest on her way to the basket. (photo by Robert Balajadia)

Hailey Senne pulls up for a mid-range jumper. (photo by Robert Balajadia)