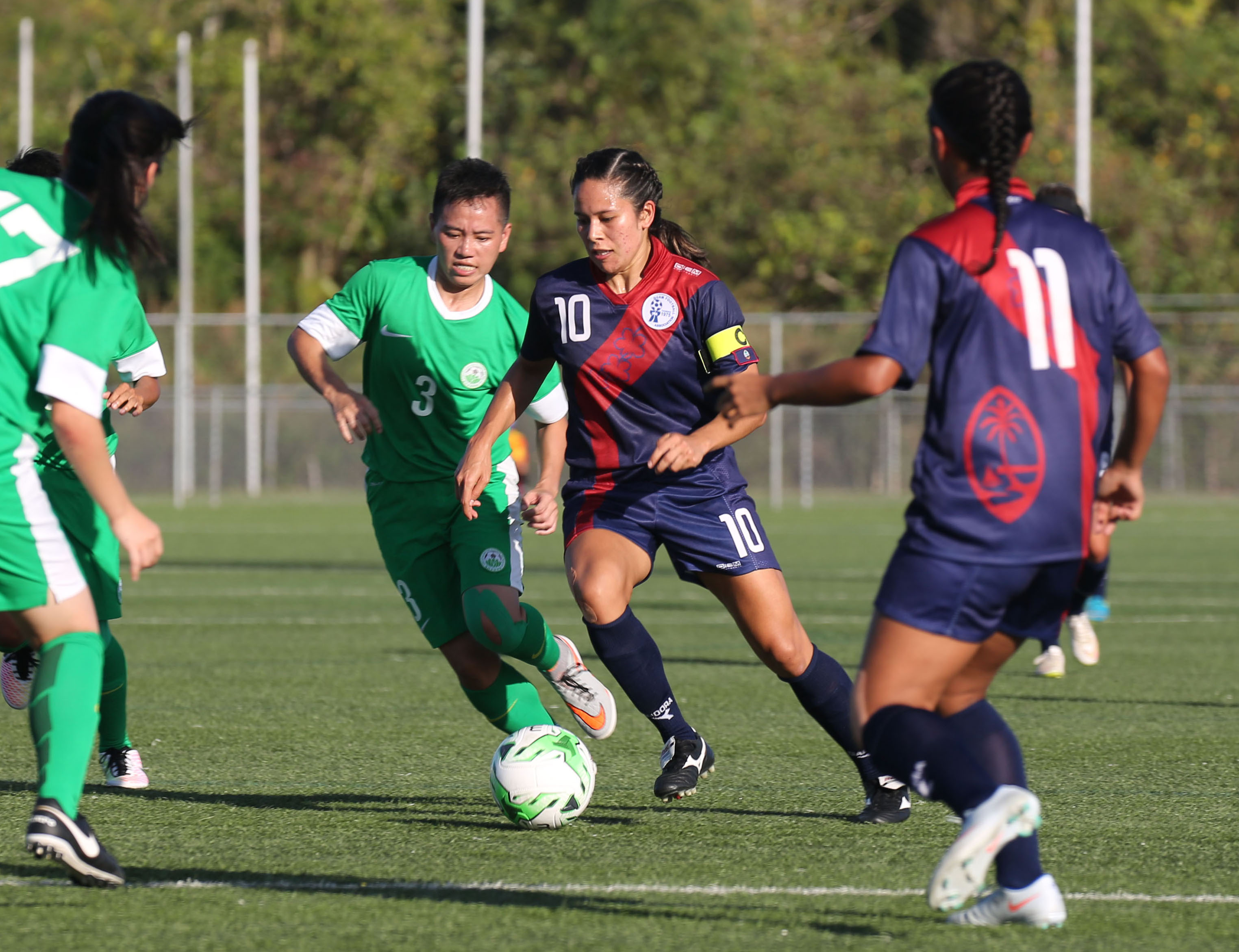 PRESS RELEASE – The Masakåda, Guam women’s national football team, will play in its first FIFA international friendly match since 2004 when the team takes on Singapore at the Jalan Besar Stadium in Singapore on Dec. 9.

“We are very grateful to have been afforded this opportunity, as these types of matches are few and far between for many women’s teams,” said Belinda Wilson, Guam’s head coach. “In addition to many of the familiar names who have been on the women’s squad in previous years, we’ve identified several up-and- coming players who have shown the drive and skill set to potentially succeed at the senior national level. We would like to integrate these players into the senior national program and create sustainability and depth to the program, as we’ve laid out in our four-year Strategic Plan.

Guam’s Skyylerblu Johnson makes a play for the ball just out of reach by the Macau-China goalkeeper during the EAFF E-1 Football Championship Women’s Competition Round 1 held at the Guam Football Association National Training Center in 2016 in this file photo. Johnson is one of 16 players that have been called up to represent Guam in a FIFA international friendly match against Singapore set for Dec. 9. (courtesy photo)

“Our primary objective, of course, is to win the match, but what I am also looking for is a better understanding of all aspects of the game at the highest level by the players in preparation for upcoming regional tournaments, like next year’s EAFF E-1 Football Championship Women’s Competition. The majority of the players who’ve come up through the youth national program and have tasted success against opponents in their respective age groups will now get to experience a whole other level of play,” Wilson added.

“We are very much looking forward to welcoming the Guam women’s national team to Singapore for this international friendly match,” said Julie Teo, Football Association of Singapore General Manager, Grassroots and Women’s Football.

“There aren’t very many tournaments for women’s teams in the region, so by creating opportunities like this friendly match and organizing more of these consistently, we are not only helping our respective teams gain match experience for improvement, but also contributing to the overall development of women’s football in Asia. We hope to continue this exchange annually, whether we host Guam’s team again in Singapore or possibly play a friendly match in Guam.”

None of the players called up for the Dec. 9 match featured on the team that played in Guam’s previous FIFA international women’s friendly in 2004. In 2004, Guam also played against Singapore in Singapore, with the home team winning 2-0.

Wilson will be assisted by Maggie Phillips and Goalkeeper Coach Ross Awa. Lexi Gambrell will travel with the team as its Athletic Trainer, as well as Jill Espiritu as the team’s Media Officer.

Since forming the GNYFF in 2009, the league has never gone without a season until 2020. The league announced their plans to cancel the 2020 season amidst the COVID-19 pandemic.