WENDY’S ALL-STAR GAME: TEAM ELITE OUT TO HAVE FUN

The third annual Wendy’s Boys Basketball All-Star Game presented by GSPN is set to rock the FD Phoenix Center on May 29 to end your Memorial Day weekend! Check in with Team Elite and head coach Neo Pineda a week before the big game! 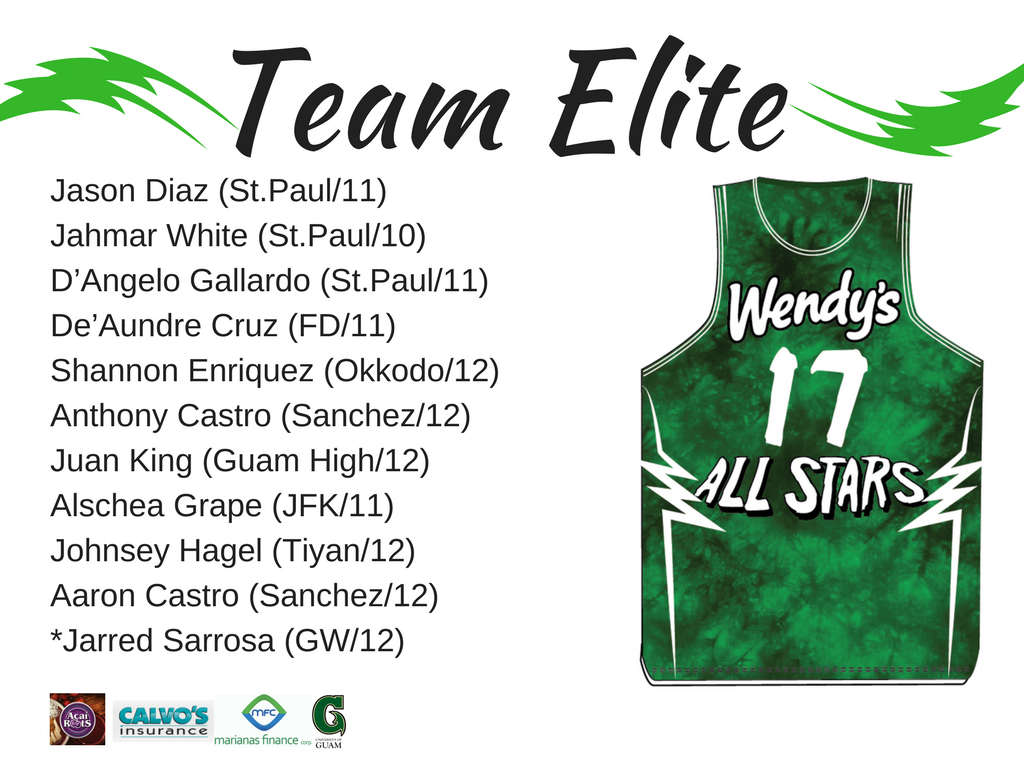 The third annual Wendy’s Boys Basketball All-Star Game presented by GSPN is set to rock the FD Phoenix Center on May 29 to end your Memorial Day weekend!

Team Elite, under St. Paul Warriors and league champion head coach Neo Pineda, and Team Supreme, under FD’s and Guam National’s EJ Calvo, have a roster full of the top talents from the 2017 boys basketball season ready to tip-off.

Events will be going on all night long which include a blind-folded free throw contest, 3-point contest with some of the stars from the GBA and a half-court shot from Buddy’s Home Furnishings. Wendy’s will also, once again, be giving away $500 award to the basketball club with the highest numbers in attendance!

Preceeding the 6 pm All-Star Game will be the Futures Games pitting the best talents from the middle schools at 4 pm.

Warriors head coach Pineda has an unforgettable 2017 after taking his high school Warriors unbeaten, eventually winning the IIAAG title. Then Pineda turned to his middle school squad where they kept a three-year winning streak alive to finish as IIAAG middle school champions for the third straight year, all the while winning 33-straight games.

With all the W’s already in Pineda’s book for the year, his approach to his first ever head coaching job as an All-Star Game coach will be rather simple.

“It’s really just about having fun. I’m sure the competitive nature of the players are going to want to win this game, but we’re going to hopefully mesh and have a great time,” laughed coach.

Pineda picked three Warriors to begin his draft, which will help with Team Elite running short on practices due to the athletes who were in the middle of 4th quarter sports.

“I’m so thankful that Wendy’s and GSPN have been able to put this together. It’s great, something that every player should aspire to. All the players are really excited about this game and the players that we have on both teams deserve this after working so hard all season,” stated Pineda.

Guam High Panther Juan King, Jr. has already participated in an All-Star game this year after dazzling fans in the Triple J Football All-Star Game in late 2016. King is looking forward to ending his year strong before he readies to attend college Culver-Stockton.

“It’s just going to be a great way to end my high school career. I’m just going to go out to try and have fun. It’s a good atmosphere to be around the good talents here on Guam,” said King.

Players like Warriors guard D’Angelo Gallardo are just looking forward to suiting up with teammates who he went to battle against during the regular season, testing out chemistry and building camaraderie in the process.

“I’ve never competed in an event like this and I’m excited for it. I’m also excited that I get to play with the same guys who have been my enemies throughout the season, and we’re all going to have fun,” said Gallardo.

If you haven’t been able to attend either of the previous two All-Star games then you’ve been missing out on all the fun.

“It’s going to be a great game and everyone there should have a great time. Fans should definitely come out and watch,” added King.

“It’s an All-Star Game, we’re going to do our best to make it fun,” said Gallardo.

Stay tuned as we see what Team Supreme and head coach EJ Calvo have been up to on Tuesday!