BJT comes up big with a win over veteran Joe Warren 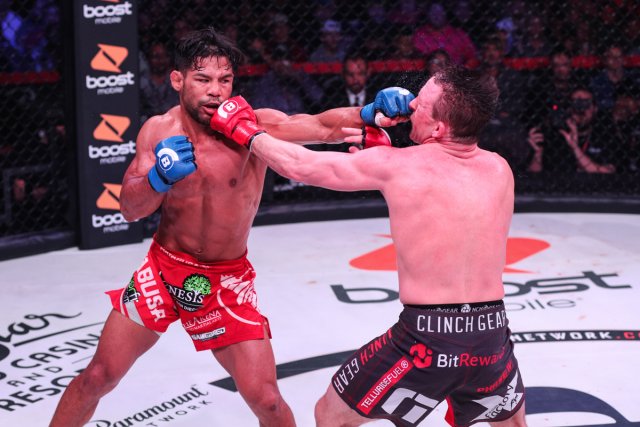 Baby Joe’s right hand was his weapon of choice as he inflected some damage to Warren’s face. (photo by Bellator MMA)

Baby Joe Taimanglo stayed in the hunt for a Bellator world championship with an impressive split decision win over former champion and promotion icon Joe Warren in Bellator 195 in Oklahoma.

Taimanglo’s stand up game and takedown defense against a world-class wrestler proved to be the difference in a 30-27, 30-27, 28-29 win over the former three-time world champion.

The fight following had current champ Darrion Caldwell choke out Leandro Higo in the first round to retain his title.

After the fight, Chael Sonnen asked Caldwell if he was down for a trilogy with Baby Joe. BJT is the only fighter to beat Caldwell as a pro.

If anything, Baby Joe sure put on a show against Warren to warrant a title shot and break the 1-1 tie with Caldwell.

The first round was close as Warren used his wrestling prowess to take down Baby Joe on two occasions, but BJT’s striking was on point and did some major damage to Warren’s face with his right hand.

BJT’s wrestling was on par with Warren’t s world-class game and came prepared with excellent takedown defense. He almost finished the fight with this guillotine attempt. (photo by Bellator MMA)

The second round was all standup with Taimanglo once again getting the best of his older opponent with some solid strikes from both hands, all the while defending the takedown with ease.

The third and final round turned into a ground game exhibition as both world-class athletes displayed excellent transitions and positioning with Taimanglo nearly ending the match with a guillotine before Warren popped his head out right before the horn.

This snaps Taimanglo’s two-fight losing streak (Caldwell and Higo) and keeps him in the hunt for the title he’s long wanted. Let’s just hope the Bellator brain trust makes the trilogy happen next.