The FD Friars and Academy Cougars are your IIAAG Golf Champions! 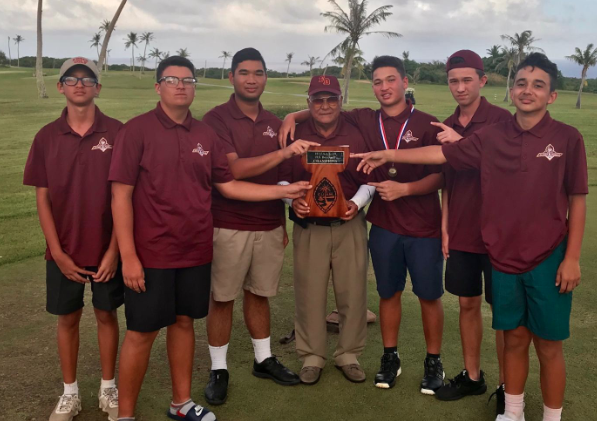 The FD Friars powered through the IIAAG Golf season defending their championship dominance with an impressive 11 wins and 1 loss record. Their only loss came at the hands of St. John’s Knights who ended the season in 2nd place with 8 wins, 2 losses and 1 tie.  Harvest Christian took the third-place spot with 5 wins, 3 losses and 1 tie.  There were seven High Schools competing in the double round robin format for the coveted IIAAG High School title.

The Father Duenas team relied in its team depth and chemistry consisting of Sophomore trio of Ivan Sablan, Eduardo Terlaje and Anton Lacson.  The team was further boosted by Freshman sensation Markus Nanpei, Junior World veteran Ian Paulino and Senior Jose Hernandez. According to FD Coach Gus Gogue, with the caliber of golfers we had, we were a constant match-up problem for the opposing teams.  There were no easy matches to be won when playing against FD.

FD’s future looks very bright with majority of the team returning next year to defend the title. The All-Island Golf Boys Tournament was also concluded with 40 Junior golfers from their respective High Schools chase for the Boys individual honor.  FD’s Ivan Sablan and St. John’s Masaki Ujiie shot the low round of 76. Ujiie was awarded the Title after a sudden death shoot-out with Sablan. Gae Baek Kim of Harvest Christian came in close third shooting a steady round of 77.

Nanpei commented, “It was not as easy as it appears. Team needed to pay very close attention to details approaching every match.”

AOLG did not miss a beat and was in full display during the Girls All-Island Tournament.  The Lady Cougars took the top three spots. AOLG Sophomore Hannah Therrell took 1st place scoring an 84, edging teammates Tia Taitingfong (Senior) shooting an 85 and Sarah Therrell rounding of third place shooting a 96.