FRIARS EXPLODE IN SECOND HALF TO SEND BULLDOGS HOME 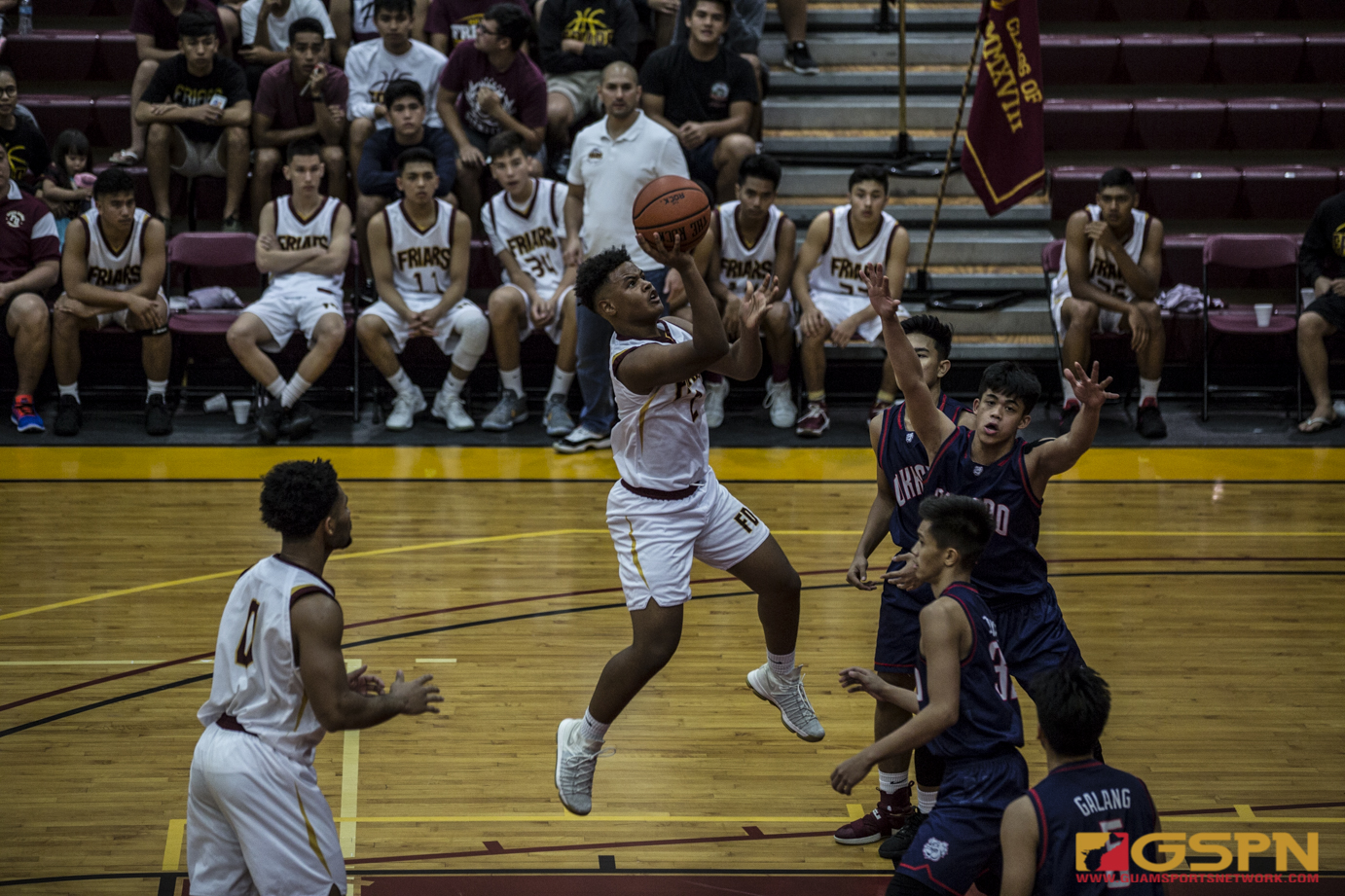 With the rest of the IIAAG Gadao Division getting sent home in a big way Friday evening, the FD Friars proved the lone remaining representative from their division as the boys basketball playoffs completed their quarterfinals.

The Friars knocked off the Okkodo Bulldogs, who just made it into the playoffs,  71-52 thanks to a huge second half to blow the game wide open. Friar forward Nathaniel Kyle Gaitan notched a triple double with 17 points, 10 rebounds and 10 steals.

Gaitan was in hot water in the 1st quarter after getting subbed out twice early for getting into the wrong offensive formations. Instead of sulking, Gaitan turned in a strong defensive performance by getting his first triple double of the season.

“I don’t like being my coaches problems, but when they get on me like that it pushes me to work harder. It helped me really get into today’s game,” said Gaitan on the early issues.

Friar Tony Quinene scored 14 points and De’Aundre Cruz added 12 to round out the Friars top scorers. Okkodo was led in scoring by center Christian Manalo and guard Ruedel Galang.

The Friars got a big first quarter from center De’Aundre Cruz as the Friar senior scored the teams first eight points. A three-pointer from Brandon Soriano off a second chance score put the Friars up 18-0. Okkodo closed the period on a 5-0 to stay right at the hip.

FD started to get into their offensive groove as Christian Taitano and Gaitan converted on and-one plays, plus a quarter ending layup from Tomas Calvo, giving FD a hard fought 34-24 halftime lead.

“I’ll admit, we had jitters in the first half. At the half, our coaches did a great job at regrouping our team and we were able to come out strong. That 3rd quarter really boosted our efforts and we started going up from there,” added Gaitan.

The Friars stormed out to a quick 6-0 run in the 3rd period off buckets from Cruz and Gaitan to force a quick Bulldog timeout. FD kept their foot on the gas as their defense fuelled another 7-0 run, ending with a wild assist off hesitation dribble from Taitano to Cruz that gave FD a 49-30 lead midway through the 3rd.

The double-digit lead would hold strong for the Friars as Okkodo got as close as 63-43 midway through the 4th after a 5-0 run from Galang.

The Friars will now host the St. John’s Knights in the semifinals Tuesday where they already picked up a victory this season. Gaitan and the boys are well aware they are going to see St. John’s best, but having home-court advantage is a good bonus.

“We have to step it up on the defensive end. They have great shooters so we have to close out on them and win the battle on the boards,” said Gaitan.

The St. Paul Warriors will host the JFK Islanders after both schools picked up one-sided wins Friday evening.

The Friar Nation rises as FD starts to build a lead. (photo by Michael Ebio)

Friar Tony Quinene is met in the backcourt by Bulldog Ruedel Galang. (photo by Michael Ebio)

Bulldog Ruedel Galang uses a screen to get open. (photo by Michael Ebio)

Bulldog Christian Manalo gets the Bulldogs on the board. (photo by Michael Ebio)