After 14 years, the St. John’s Knights boys middle volleyball team can finally raise their championship banner after finishing the season with a 9-1 record. 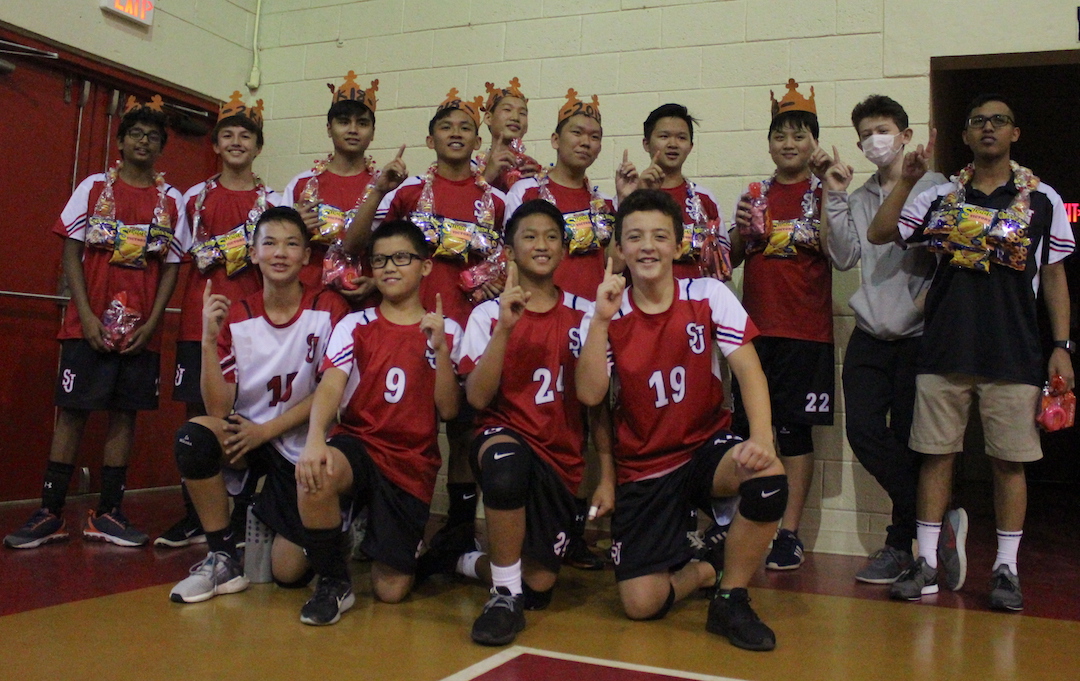 After 14 years, the St. John’s Knights boys middle volleyball team can finally raise their championship banner after finishing the season with a 9-1 record.

“I’m really happy we were able to win the championship for my team. It’s my 8th grade year and I hope other teams can follow as well,” said St Johns’ Erren Chen. Chen and fellow eighth-grader Adam Cruz led the Knights with six kills each.

The Knights looked nervous in the opening set as the crowd packed their home gym and watched as they trailed 0-8 to the visiting Bishop team. Russell Maratita had two kills for the Obispos in the opening run as the (6-4) Bishop team looked to spoil the Knights’ championship hopes.

“I was down at that point; thinking if we lose this game that all the hard work we put in this season would be gone,” said Chen.

St John’s head coach Arvin Flores settled his team down and looked to seize momentum in the second set. “The game is not over. You’ve work hard for this. Don’t just give it away,” said Flores between sets.

The Obispos looked to win in two sets and led early in the set but the Knights finally found their groove. Chen got the crowd cheering with two consecutive statement kills in the second set as the Knights were able to go ahead by eleven points and eventually take the second set 25-16.

Knight team captain Cruz guided his team to victory in the decisive third set. After Maratita put Bishop ahead 5-2 to in the final set, Cruz recorded a kill and an ace for the Knights as they surged ahead 8-7.  Setter Kyle Wang was also clutch with accurate sets to hook up the outside hitters which allowed the Knights back in the third set.

Bishop head coach Steve Pangelinan called out plays to try and get the young  Obispos back in the game but a pair of unforced errors had his team trailing 8-11.

Andrew Stenson stepped up for the Knights in a crucial sequence of the game, recording a kill from the back row and later serving an ace to put St Johns ahead 13-9. Bishop dug deep and managed a side out but another error had the Knights on the brink of a championship leading 14-10.

Brock Larsen from the Knights served the final point, an ace, to give the Knights the championship with a 15-10 third set victory.

“The coaches message going into the second set was to just execute on the set plays and we did a better job of it in the second set,” said Cruz. “We are leaving something very good behind us and I hope the next team can do the same,” added Cruz.

Flores, in his third year as the head coach for the Knights, thanked assistant coaches Chris Shepherd and Andy Yao and manager Stacey Yamazaki for their help during the season. “They covered for me at practice when I had my college classes. I would especially like to thank my team amd also the SJS fans for making this the most memorable season of my life,” said Flores.