A rainy pre-game did anything but stop the GW Geckos from getting a much needed first win against the Tiyan Titans. The final score of the ball game was 24-9 after being called in the bottom of the third when the 15 run rule was put into effect. 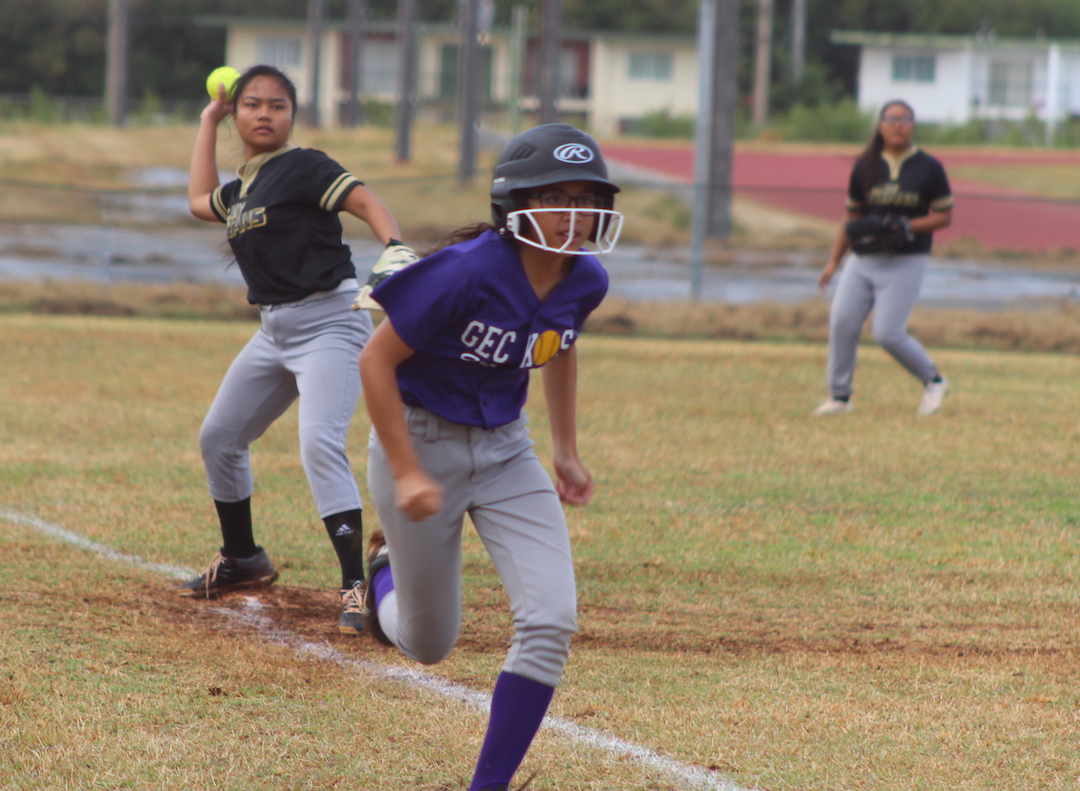 A rainy pre-game did anything but stop the GW Geckos from getting a much needed first win against the Tiyan Titans. The final score of the ball game was 24-9 after being called in the bottom of the third when the 15 run rule was put into effect.

For most of the game, Tiyan had a difficult time scoring. This was until the top of the top of the third inning when five runs were scored. This included an impressive RBI hit by Lady Titan Oplado.

For the majority of the game, however, the Gecko defense led by pitcher Savannah Grant.

“Communication on the field really helped the defense,” stated Grant.

Gecko Savannah Grant fires off a pitch in the 2nd inning. (photo by Robert Balajadia)

GW was able to trample Tiyan and run away with the game early, when they earned 18 runs in the bottom of the first inning. Many of these runs were held responsible by defensive errors on Tiyan’s end, as batters were walked 16 times, and home being stole six times.

Kam Gumataotao was able to find home two out of the three times at the plate. One of which was when she stole home and the other was scored when Alicia Artero hit an RBI, giving way to Gumataotao, and fellow Gecko Joresha Quichocho to earn a pair of runs. Another RBI opened the door for Savannah Grant. This RBI was hit by Andrea Hinete. The score at the end of this insane scoring firestorm was 18-1, GW almost completely dialed in for a win.

Three Titan runs were scored in the top of the second inning. Two of the runs were scored when Marciano hit a solid RBI single which batted in Quintanilla and Hosei for a pair of runs. The other came in when a batter was walked on full bases, making Oplado score at home. The score was now 18-4.

A triple set of runs were produced in the second inning by the Geckos. All three of these were made possible by Janell Lujan who hit an RBI. This created runs from Elehe Manglona and Marcy Pangelinan. The score after this was an even more damaging 21-4.

Many more runs were scored throughout the game in the third inning, but Tiyan was not able to top the Geckos, who went on to win 24-9 in three innings. This is GW’s first win on the season.