The Malesso Rebels ended their summer with a championship in the 2018 Docomo Pacific Youth Summer Showcase with a thrilling 29-26 victory over the Warriors Club. The Rebels came from behind to defeat the Warriors in a gritty defensive game at the Elite Basketball Center in Tiyan. 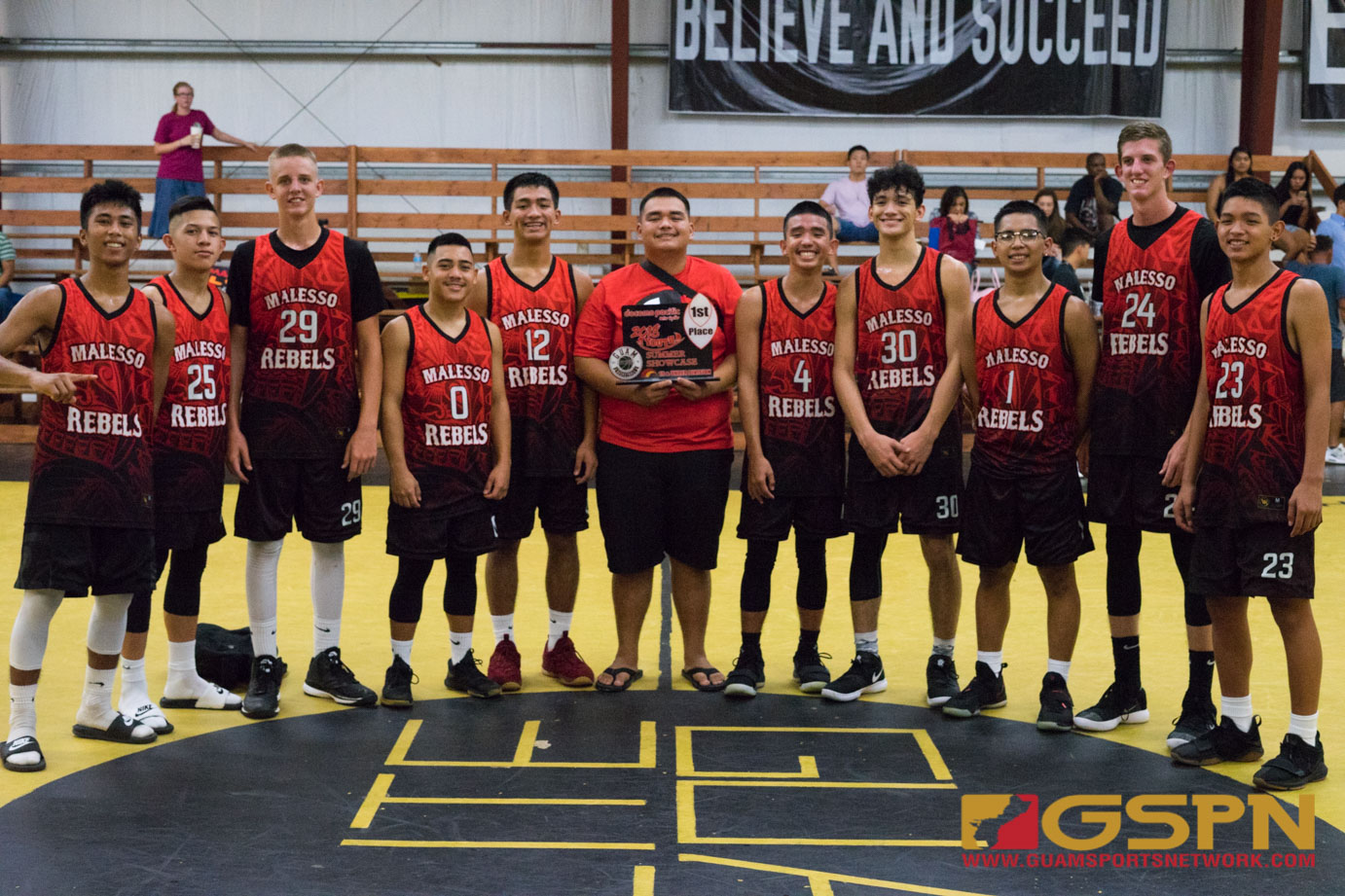 The Malesso Rebels ended their summer with a championship in the 2018 Docomo Pacific Youth Summer Showcase with a thrilling 29-26 victory over the Warriors Club. The Rebels came from behind to defeat the Warriors in a gritty defensive game at the Elite Basketball Center in Tiyan.

Malesso’s Chach Lujan earned the Wendy’s Player of the Game honors with a game high 15 points. Lujan’s four-point play late in the second half ignited the Rebels to seize momentum and the championship.

Audrey Dela Cruz scored the first five points of the contest with a three-pointer and a driving lay-up to put the Warriors up 5-0. Hayato Tsuji recorded a steal and went coast-to-coast to give the Warriors a commanding 7-0 lead.

The Rebels looked to feed the ball to their big man Revis Henderson but the Warriors played a box-and-one defense preventing him from working in the paint. The Rebels settled for three-point shots and were unable to score until seven minutes into the contest.

The Rebels fight back and manage to cut the deficit to 16-13 by halftime with Isaiah Mendiola sinking back-to-back three-pointers.

“We saw that they were playing box defense on Revis so we decided to move the ball around more,” said Lujan.

The Warriors were not going to let Henderson have many touches so the guards were forced to make contested shots from long range.

The Warriors’ top scorer Jahmar White drew much attention from the Rebels as they did not allow him to get open looks. White was fouled four times in the first half and scored a bulk of his points from the charity stripe.

“The strategy was for me to stay down low and it was all about sacrifice. We had to stay together and play well, it showed out there how much we play together and how much of a family we are,” said Henderson.

Henderson and forward Javier Castro protected the basket on defense combining for six blocks in the contest. Castro also a game game high three steals to contain the Warriors to their lowest point total for the season.

Henderson tied the game at 17-17 just minutes into the second half. Shortly after tying the game, Henderson picked up his fourth foul and the Warriors drove to the basket to try and make him foul out.

Reo Aiken from the Warriors knew exactly how many fouls Henderson had and made two baskets in the paint with the Malesso big man backing off to avoid fouling out.

Aiken’s second basket in the paint, a pass from Tsuji, helped the Warriors go ahead 25-19. With less than four minutes left, Castro records a steal and pushes ahead to Lujan. Lujan puts up a shot two feet behind the three-point line and gets fouled for the four-point play to start a run.

The Rebels take advantage of a Warrior turnover and Jarred Gomez ties the contest at 26-26 after he made a pair of free throws. The Warriors miss a shot attempt and Gomez drives to the basket again and gets fouled, making 1-2 free throws to put Malesso up 27-26.

Lujan records a steal with less than a minute remaining and the Warriors are forced to foul. Lujan makes the first free throw but misses the second free throw attempt. Henderson grabs the offensive board and is fouled immediately.

Henderson makes the first free throw but misses the second free throw as the Rebels cling to a 29-26 lead with 16 seconds remaining.

The Rebels key in on White on the closing seconds of the game.  The Warriors move the ball around and Dela Cruz gets an open three-point look from the left wing but it rattles out as the Rebels celebrate another championship in the summer of 2018.

“We are all a big family. The families in Merizo all come out to our games and if it wasnt for them keeping us all pumped up then it might have been a different outcome,” said Henderson. “The cheering from the Merizo crowd gave us alot of confidence. They gave us that drive and they were a big help,” said Lujan.

Mendiola had six points for the Rebels. Dela Cruz and White each chipped in eight points to lead the Warriors. Aiken had seven points and eight rebounds for the Warriors.