Make it five in a row for the NAPA Rovers. 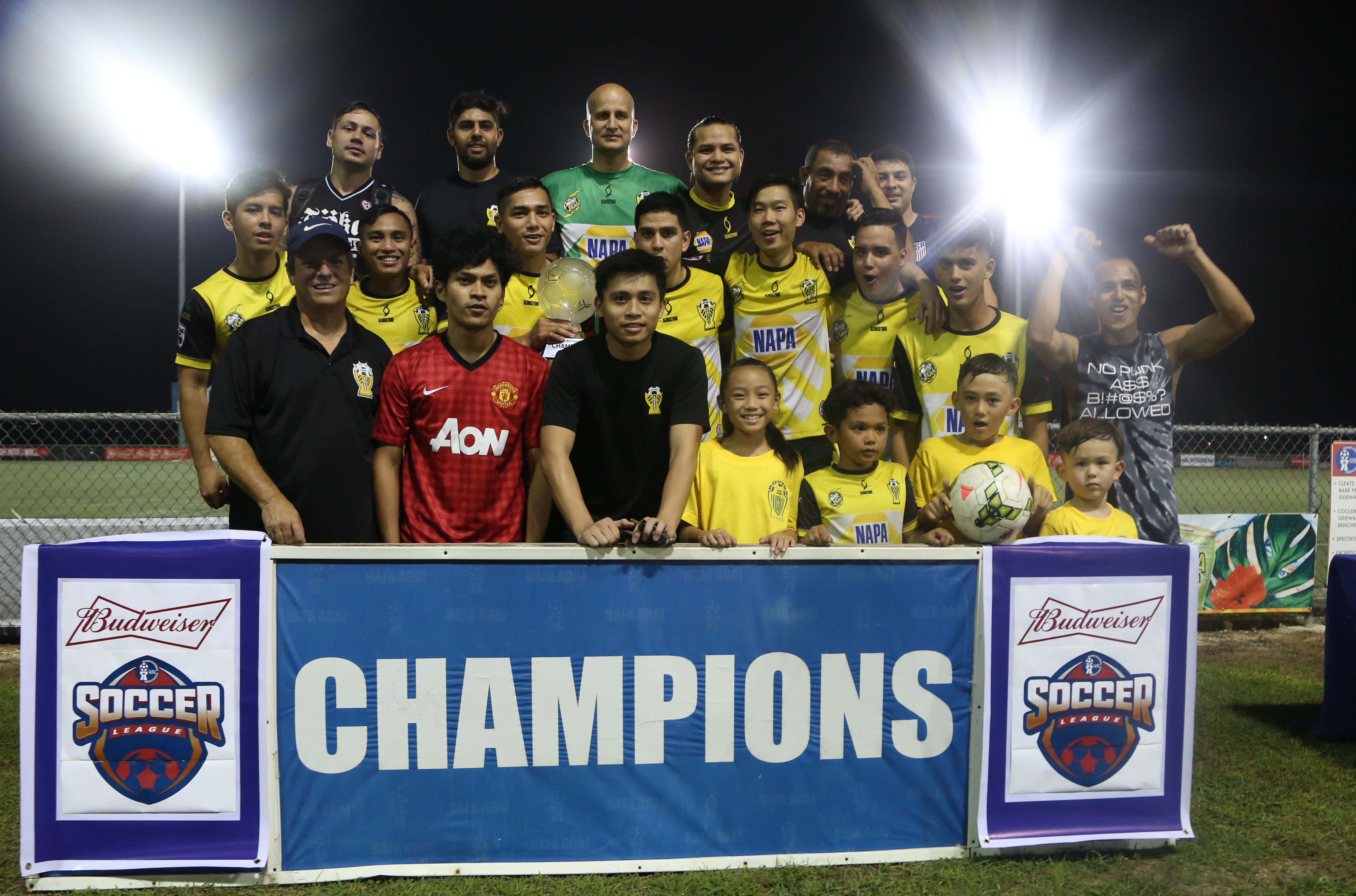 PRESS RELEASE – Perennial Budweiser Soccer League champions NAPA Rovers FC secured their fifth-straight title over the weekend, but not without an incredible fight from finals debutant Lots of Art Heat in a 4-3 contest at the Guam Football Association National Training Center.

With the score at 3-3 in the closing minutes of the match, the Rovers’ Mark Chargualaf managed to maneuver through Heat defenders to find space for a shot on goal, only to have the ball parried by Heat goalkeeper Ryan Root. Before Heat defenders were able to recover, Rovers’ Matt Robles followed up with a right-footed shot inside the goal box for the eventual game-winner.

The Rovers had the upper hand early in the first half with a goal from captain Chargualaf in the 15th minute, but eight minutes later, speedster Gideon Tyquiengco nearly sprinted the entire length of the pitch, moved into the penalty area with Rovers defenders scrambling to catch him, and dished the ball off to A.J. Root for the finish to level the match.

The Rovers’ Fook Liao later put his team up 3-1 on a pair of goals that included one off an acrobatic scissor kick in the 39th minute. The Heat were unfazed by the Rovers’ heroics, with a goal from Jan Flores off a Keith Surber cross in the 44th minute to head into halftime with a 3-2 score.

Flores later leveled the match again 10 minutes into the deciding half after receiving a throw-in from the right side and spinning around Rovers defenders for a shot to the opposite post. The match went into a stalemate for the remainder of the half until Robles’ 90th minute score.

The Heat’s loss was the first in playoff action, with the No. 8-ranked team winning 6-5 against previously undefeated and No. 1-ranked Islas de los Ladrones FC in the quarterfinals, followed by a 4-3 victory over No. 4-ranked Bank of Guam Strykers I in the semifinals.

Teams in the league will next play in the Jamaican Grill 11th Annual GFA Cup tournament, Guam’s premier men’s soccer competition. Matches begin June 1 at the GFA National Training Center with 16 teams facing off to earn a berth in the main draw of the tournament. The top eight teams from the Budweiser Soccer League automatically qualified for the tournament’s main draw. The tournament’s bracket is available online at http://www.guamfa.com/all-leagues-mens-gfa-cup-results