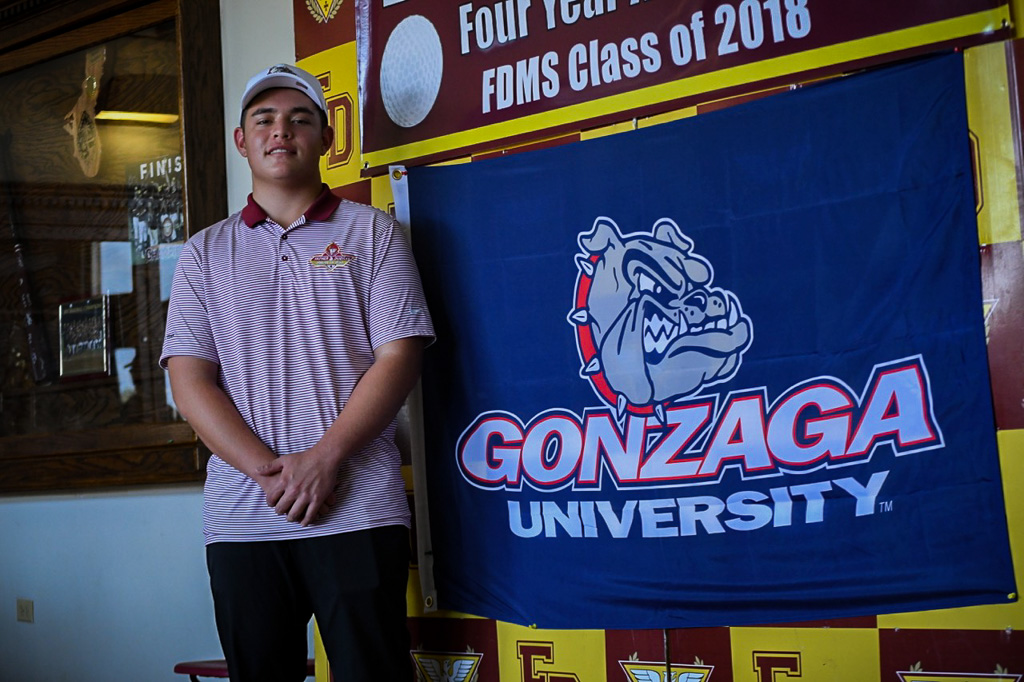 Hard work, discipline and dedication. Those are the characteristics used to describe Father Duenas student athlete and golf phenom Brentt Salas. Salas, 17, spent half of his life setting a goal and is working hard to accomplish his dreams. On Thursday afternoon, he signed a letter on intent to attend Gonzaga University.

Salas ends his high school career with the unique accomplishment of winning the IIAAG Golf All-island individual title for all four of his high school years. He is also a Guam Junior Golf Champion and has been to several tournaments in the US and overseas.

Salas spent endless hours at the driving range and on the golf course working on his game. He is described by his peers and coaches as not only Guam’s best junior golfer, but one of the best golfers of any age in the region.

The soon-to-be FD alumni not only excels on the golf course, but also in the classroom. Salas achieved a 3.42 grade point average, a tough feat at FD which uses a grading scale 10 points higher than public schools.

Salas was joined on the signing table by his proud parents, Carlos and Roxy Salas, his high school coach Gus Gogue and the Guam National Golf Federation President Richard Sablan. The press conference was hosted by FD at the lobby of the FD Phoenix Center.

His most notable accomplishment was making the cut at the World Junior Golf Championships at Torrey Pines. He’s been to several international countries and has a room filled with trophies and medals.

“We are all very proud of Brentt. He is a product of Guam and we will continue to support and cheer for him” said head coach Gus Gogue.

“Brentt is not only Guam’s top junior golfer but he is also the top golfer on our men’s national team. We look forward to him coming back on his summer break to continue to play national qualifying tournaments. The Guam National Golf Federation will continue to support Brentt as he competes in the collegiate level,” said Sablan.

“This school (FD) has helped prepare me academically for college. The school and the teachers taught me alot about what to prepare for when I get into college”.

“I chose to major in Accounting at Gonzaga University. Mr (Ismael) Perez from FD guided me in selecting my major and what to expect entering the new semester”, said Salas. Perez is a counsellor and advisor for FD.

FD Principle Tony Thompson was also present and thanked Salas for his hard work and dedication. “We are proud of him. He got the good grades and put in the hard work to get this scholarship. He didn’t sit back and wait for the scouts to come to him, he went out there and did what was necessary to market himself. His parents and the golf community also played a big role in working together to making this happen,” said Thompson.

“It’s been a long journey for us. We’ve received alot of support for a small community here on Guam. We want to thank everyone including the Golf community that has been very kind to Brentt,” said Carlos Salas.

“Of course, I want to get settled in first and play well when the season starts in September. One of my other goals is to maintain a 3.5 GPA,” said Salas. Salas said his long term goal is to eventually play golf professionally.

Salas had some advice for the next generation of junior golfers to follow: “Practice as much as you can and make the right sacrifices. Stay on top of your academics and never give up on your goals.”