The Sanchez Sharks are hanging tough in the Taga Division after gaining a big victory over the Tiyan Titans Friday evening to keep their IIAAG playoff hopes alive. 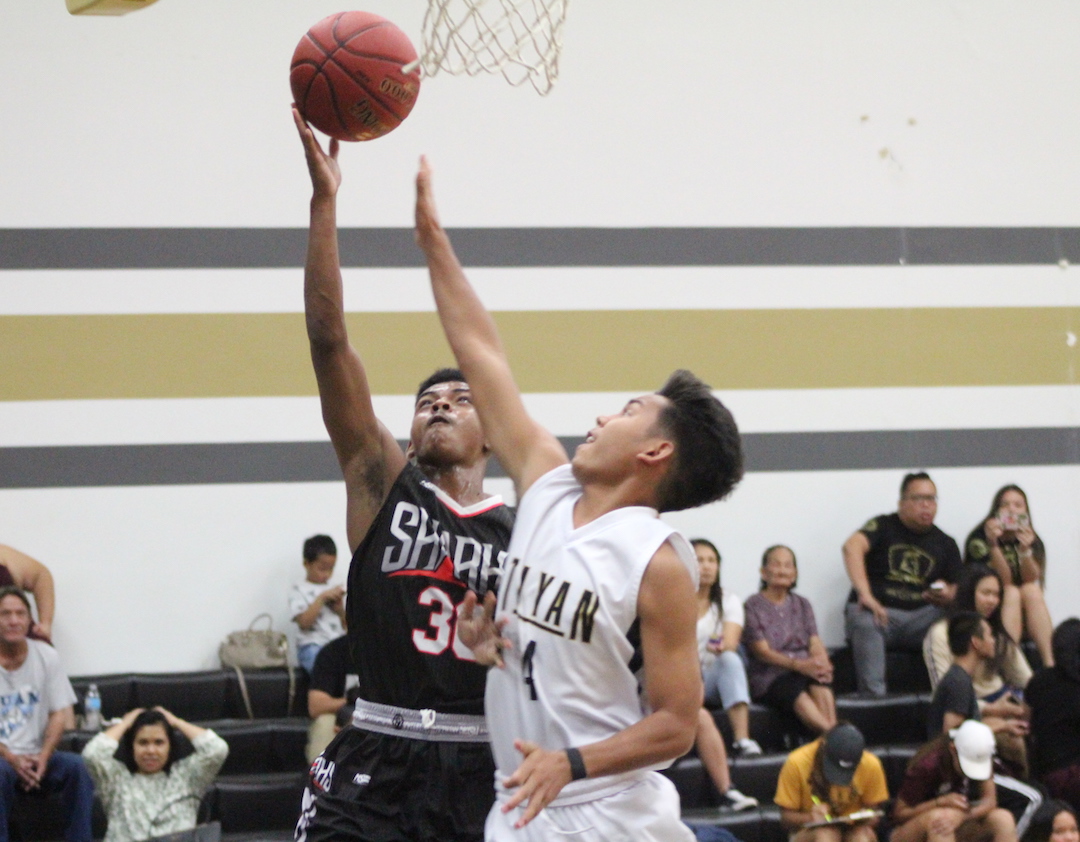 The Sanchez Sharks kept their IIAAG boys basketball playoff hopes alive after getting a victory in hostile waters over the Tiyan High Titans on the road Friday evening. The Sharks came into the game in a must win situation, and they were able to do just that with a final score of 63-54, getting a big performance by guard Rjay Saburo who held the game-high 18 points.

“We just wanted to come out hard right from the start. We knew we were fighting for a playoff spot, so we had to play hard from start to finish,” said Seburo.

It was a fairly even matchup as the score was neck-and-neck for most of the first half. It wasn’t until the final minutes of the second quarter that the Sharks started to build on their lead. Sanchez’ Saburo was able to come up big for the Sharks, putting up seven points, two of which came from a buzzer beating jumper to end the half.

The Sharks were able to share the ball as guards Nicholas Foster and Isaiah Malig hit jumpers of their own from behind the arc. On defense, Saburo came up big in forcing Tiyan turnovers, grabbing a pair of steals in their second quarter run and end the half 37-27 with a 10-point lead.

“Although I was hot offensively, I was making some turnovers, so I had to get it back on defense and make it up for my team,” said Saburo.

In a last ditch effort, a forced turnover and two 3-pointers from Titans big man, Ryan Blas, kept up the hopes of a trailing Tiyan team in the 4th quarter. With the game in bonus, the Sharks were able to secure the lead at the charity stripe with a final score of 63-54.

With the win over Tiyan, the Sharks advance to an 8-6 record which puts them into contention for playoff eligibility. As they move on to the final games of their season, coach Jin Han looks to keep his squad focused as they prepare for the playoffs.

“These next games are very important. We focusing on trying to get better every game. We know that we’re in the driver’s seat, and we need to take care of our business for these next two games.”

The Sharks will face off against the St. John’s Knights on Saturday and then the Okkodo Bulldogs needing at least one win in order to secure their spot in the playoffs.

Titan Frank Taijeron is met in the air by Sharks Rico Gaerlan for a denial. (photo by Robert Balajadia)

Tiyan’s Joel Paras converts on a floater in the lane for two points. (photo by Robert Balajadia)

Shark Rench Pingol avoids the block from Ryan Blas for a layup. (photo by Robert Balajadia)

Tino Buekas swings a pass to teammate Richard Santos for a shot. (photo by Robert Balajadia)

Titan Franklin Taijeron uses a turn around jumper in the post for two points. (photo by Robert Balajadia)

Titan Isaiah Guerrero fights throw a sea of Sharks for a bucket. (photo by Robert Balajadia)