BULLDOGS BOUNCE BACK TO BEAT FRIARS AT HOME

After suffering two tough losses in three games to JFK and St. Paul, the Okkodo Bulldogs weren’t planning on letting their skid against the leagues top teams last much longer. Saturday evening the Bulldogs defended home court against the unbeaten FD Friars, handing them their first loss in a closely contested contest 60-56. 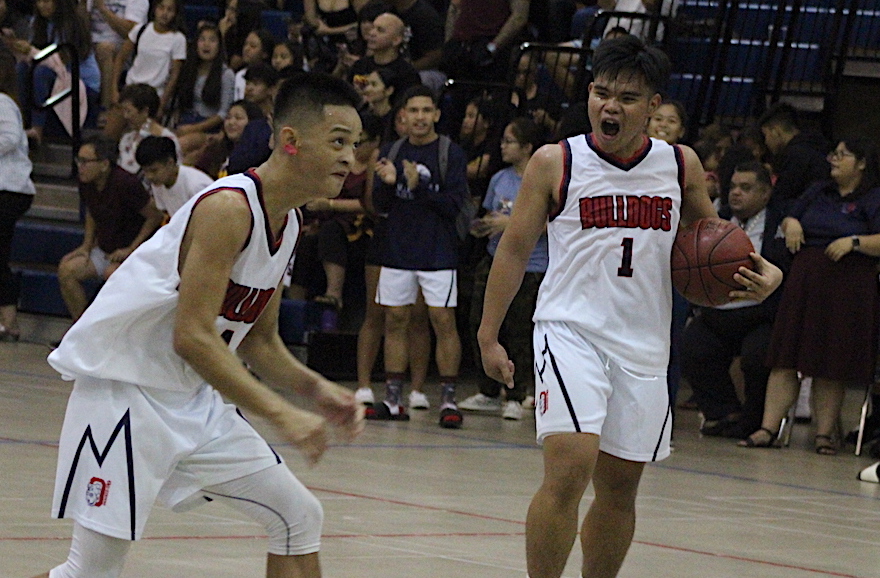 After suffering two tough losses in three games to JFK and St. Paul, the Okkodo Bulldogs weren’t planning on letting their skid against the leagues top teams last much longer. Saturday evening the Bulldogs defended home court against the unbeaten FD Friars, handing them their first loss in a closely contested contest 60-56.

“Those losses made us better and we learned how to finish stronger. We’ve had trouble starting and finishing, but we fixed those mistakes today and got that dub,” said Okkodo’s captain Dale Bautista.

Wendy’s Players of the Game: Dale Bautista and Ray Caligal

Caligal provided six big points, including a big and-one basket to challenge Friar center Matt Fegurgur to ignite the team while hitting clutch free throws in the final seconds to give the Bulldogs a two-possession lead.

“Like coach [Arleen Mad] always says, you never know when it’s your time. When she calls your name you have to be ready to step up and he did,” said Bautista on Caligal.

Down 59-56, the Friars gave up two offensive rebounds on missed free throws from Bautista and Cabral which allowed the Bulldogs two more chances to extend the lead. Caligal was fouled and converted one of two free throws with four seconds on the clock to put the Friars away.

Okkodo once again started the contest slow after not scoring a basket until halfway through the 1st quarter. Slow starts have plagued the Bulldogs all season and just recently against the Warriors just the other night as they fell behind 11-0 before finally scoring a basket.

“I don’t know what it is, but we have to shake it off,” said Bautista on the slow starts. “Our coach always gets mad at us and starts yelling and we pick it up from there.”

Tony Quinene led the Friars with 19 points as they suffer their first loss of the season. FD will host the JFK Islanders on Tuesday while the Bulldogs travel to GW to face the (5-1) Geckos.

Bulldog Dale Bautista blows a kiss to the crowd after sinking free throws to extend the lead in the final minutes. (photo by Robert Balajadia)

FD’s leading scorer Tony Quinene pulls up for a jumper in the second half. (photo by Robert Balajadia)

Friar Davin Rojas drives baseline and looks to dish to an open teammate on the wing. (photo by Robert Balajadia)

Friar Colin Santiago flips up a shot after getting fouled for a three-point play. (photo by Robert Balajadia)