The ND Royals showed Saturday why they’re considered one of the leagues top teams after beating the defending champion GW Lady Geckos 24-7 in the final game of Week 2 of the IIAAG rugby season. 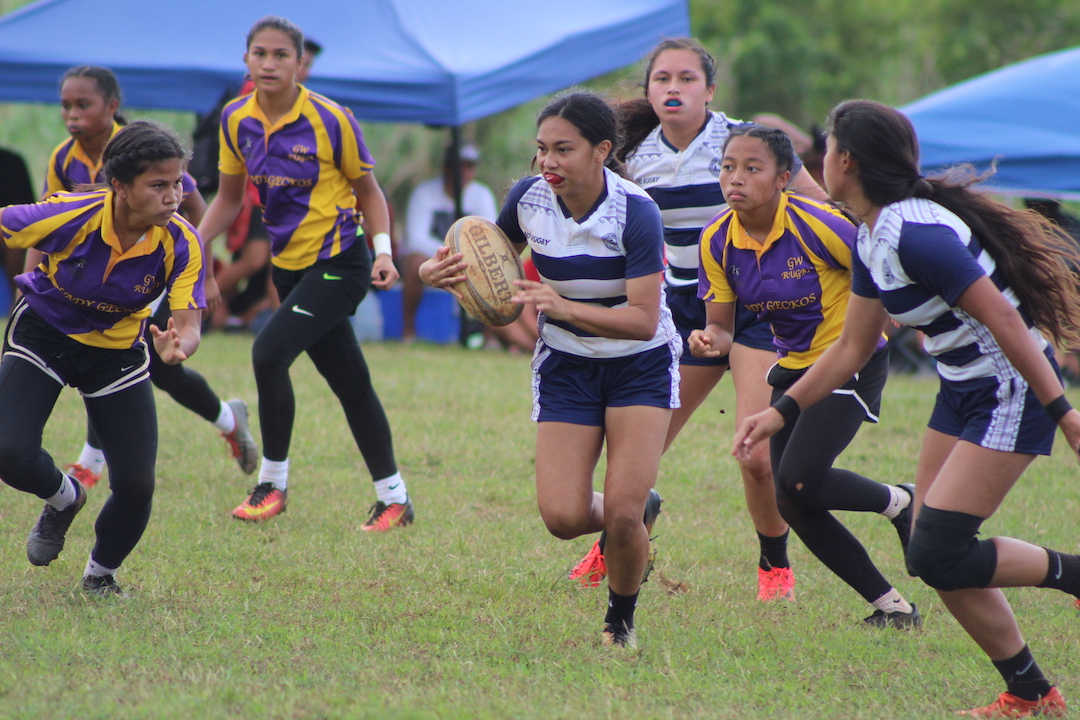 The ND Royals showed Saturday why they’re considered one of the leagues top teams after beating the defending champion GW Lady Geckos 24-7 in the final game of Week 2 of the IIAAG rugby season. ND also defeated a tough Okkodo squad in the earlier game as they remain the lone unbeaten team this far.

Taking center stage in the match was Royal’s Hana Takano, who scored her teams first three tries on the day. Takano scored two in the first half to give her team a 10-0 lead and then added one more in the second half to answer a Gecko try from Daeleen Pangelinan to extend the lead 17-7.

“We came in a little bit nervous and I guess the first score really got the jitters out of everyone. We came together to play as one like we always do,” said Hana on her early scores.

As for Takano’s scoring tries, she might have earned a new nickname with how she described her break away speed.

“I just saw an opening and took it. Just dropped the clutch, måpos,” laughed Hana.

Royal Taylor Paige Aguon added the finishing touches on the game with a late try in the second half as Austia Mendiola successfully converted that kick after for the 24-7 final.

Dictating the speed of the game was a key aspect for the Royals and their head coach Conrad Kerber hasn’t let them take their foot off the gas pedal.

“They know that everything has been set from ground zero this year. We set a game plan and it’s up to us to implement that game plan. I see how important it is for us to set the pace of the game and have the other team have to react to our pace. We were able to do that today, set the tone and set the pace,” said Kerber.

It’s still an early in the season, but the Royals do remain the lone undefeated girls team after two weeks of play. With Kerber back on the coaching grind, he now leads a talented group of girls backed with a lot of familiarity. A handful of his current players on his roster now were playing under him at Bishop, which has helped in the transition to coaching high school rugby.

“I saw a lot of my middle school talents on this team and a bunch of their parents asked me to see what I could do with this team. It was easy to get that core group together and everyone just feeds off of that. It’s inspiring to see them continue to do what I’ve coached. There is still a lot of room for improvement,” added Kerber.

WARRIORS GET PAST STREAKY SHOOTING BULLDOGS
BULLDOGS BOUNCE BACK TO BEAT FRIARS AT HOME
Loading Comments...