BULLDOGS ROUT GECKOS IN QUARTERFINALS, WILL FACE WARRIORS IN SEMIS

The IIAAG Boys Basketball Quarterfinals Playoff tipped off Tuesday and the Okkodo Bulldogs started off the post season strong by routing the GW Geckos 75-33 to advance to the Semifinals. 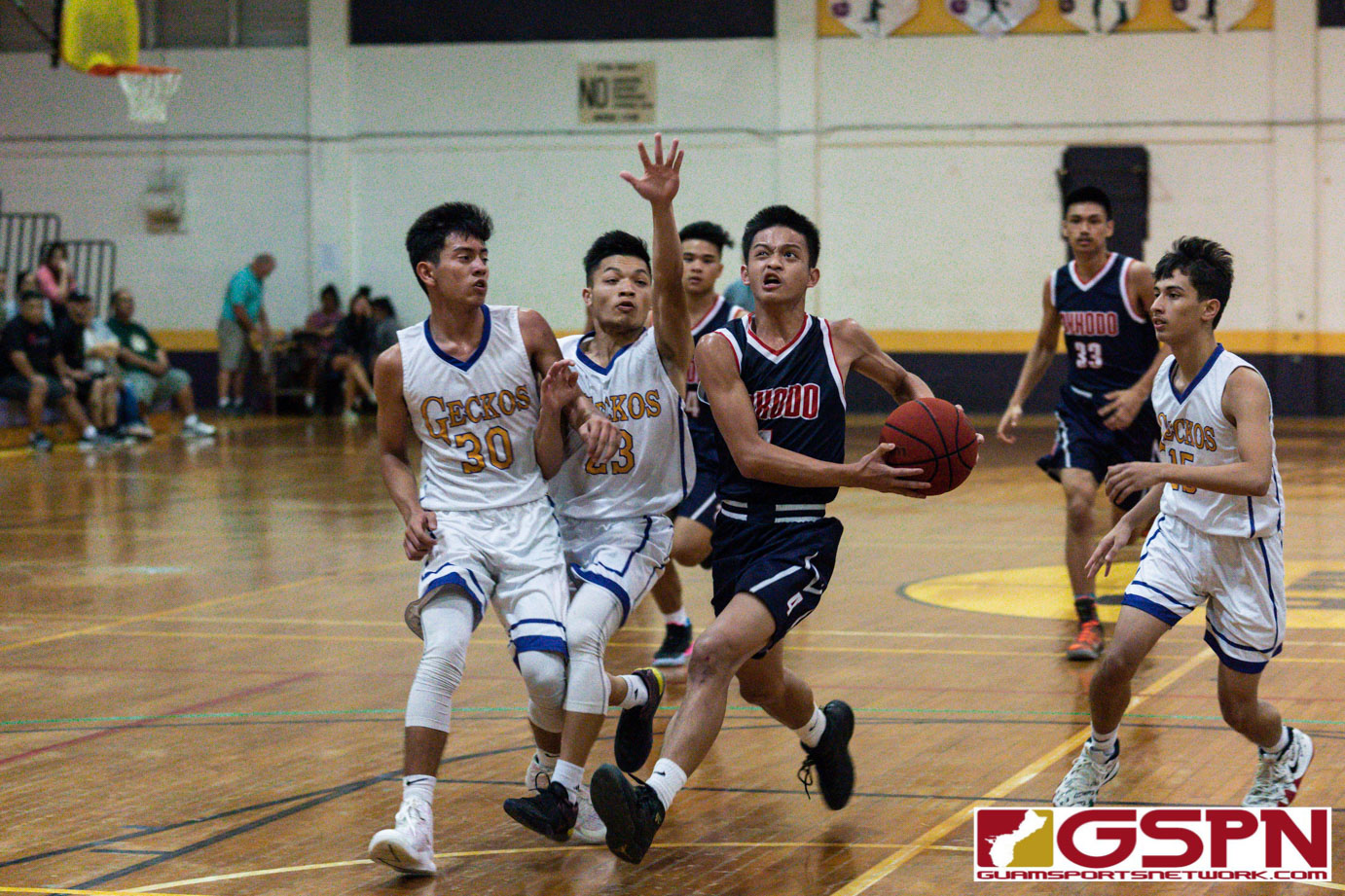 Wendy’s Player of the Game: Dale Bautista had an all around performance of 17 points, six rebounds, and four steals in the Okkodo Bulldogs 75-33 Quarterfinals win over the GW Geckos. (Photo by Michael Blas)

The IIAAG Boys Basketball Quarterfinals Playoff tipped off Tuesday and the Okkodo Bulldogs started off the post season strong by demolishing the GW Geckos 75-33 to advance to the Semifinals. Dale Bautista led the charge and had an all-around performance to boost his team into the Semis.

If fans from around the league were to choose a dark horse to win this year’s High School Basketball Title, it would be the Okkodo Bulldogs. Although they have lost to the top seeded teams in St. Paul and JFK, the Bulldogs have shown that they can never be counted out of ball games, demonstrating on multiple occasions that they can cut seemingly insurmountable deficits and compete in crunch time.

If the Bulldogs can get hot at the start of ballgames and fire on all cylinders while minimizing their mistakes, they very well could run off with a title. They did just that on Tuesday night in hostile territory.

From the start of the game, the Bulldogs were out to make a statement. High pressure defense led to transition buckets early on, and Okkodo’s pressure would cause the Geckos to struggle in generating offense throughout the game.

Okkodo began to pull away in the 2nd Quarter of action using a 10-1 run to set the pace for the blowout victory, and featured scoring displays from Dale Bautista, Nico Bonita, and Jon Michael Lorena.

Okkodo’s defense completely shut out the Geckos in the 2nd Quarter, not allowing a single field goal to be made. This was due to guards picking pockets and scoring on the fastbreak, as well as a strong interior defense by the bigs inside. The only points that were scored by the Geckos came from two free throws at the end of the Quarter.

Coming into the second half, the Geckos were able to generate some offense, and went back to trading buckets with the Bulldogs, as they did in the 1st Quarter of action.

Geckos Will Palomo scored the first points of the half after a nice move inside. The score was answered by a transition layup from Bautista.

Then, a three by Okkodo’s Kevin Cabral would increase his team’s lead to 23. Geckos Dylan Trusso answered with a three of his own, but from that point on the Bulldogs continued to dominate and ran away with the ballgame.

Two other Bulldogs would also reach double figures as Bonita scored 14 and Lorena scored 13 to go along with eight rebounds.

Trusso led the Geckos in scoring with seven points.

Bautista elaborated on what it means to be able to make it to the Semis and where he believes his team will go from here:

“I think our hard work is paying off. We’re hungry for a chance to play at the biggest stage. And we’re just going to continue to play our game. It doesn’t matter what anyone says.”