The FD Friars and St. Paul Warriors put on yet another entertaining contest Wednesday evening with FD getting a big regular season win against their IIAAG basketball rivals. 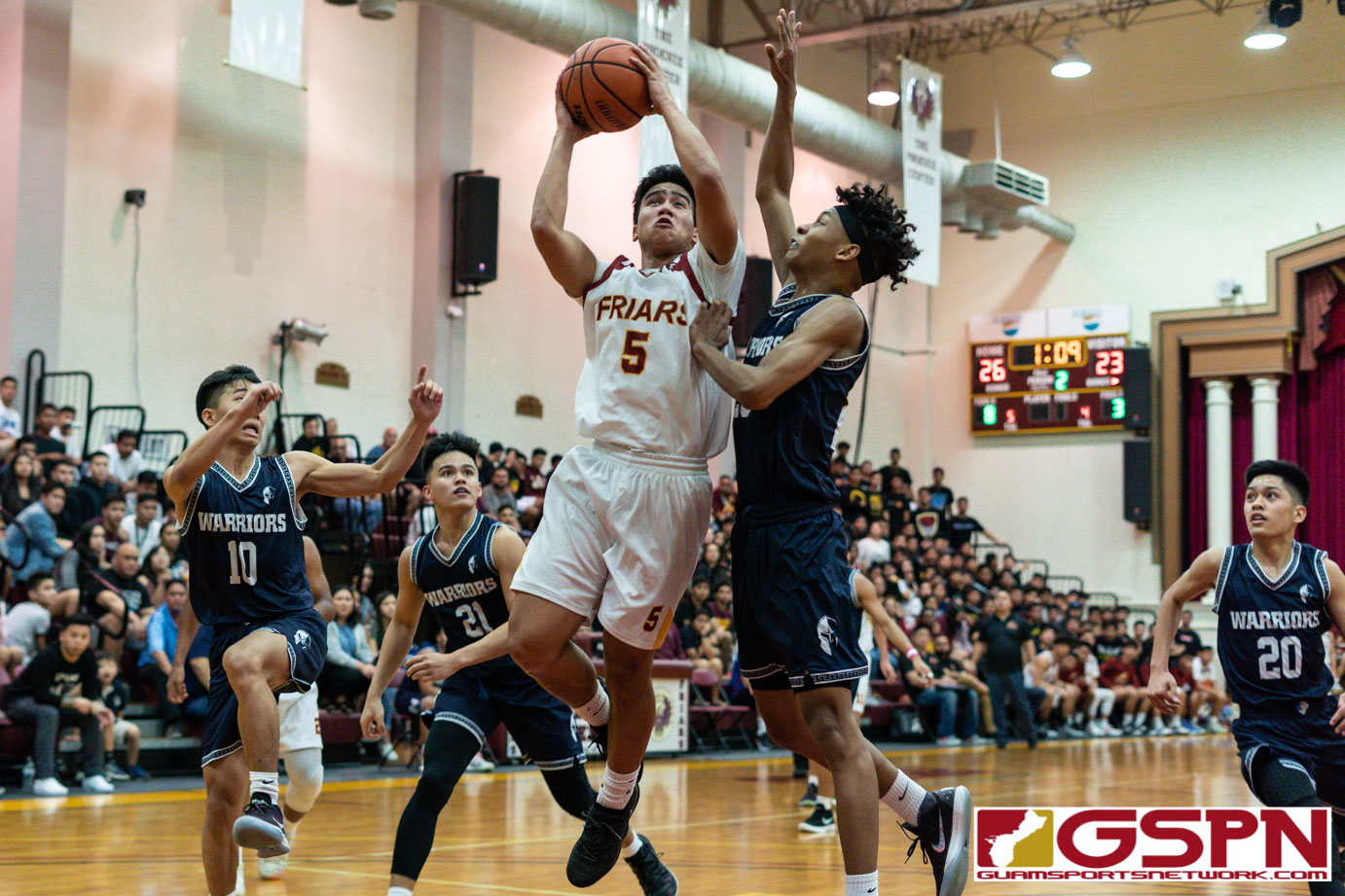 The FD Friars managed to pull off a feat that no team has been able to accomplish since 2016: hand the St. Paul Warriors boys basketball team a loss in the regular season. The game plan was far easier said than done, but the Friars controlled the pace of the game and played solid defense to upend the Warriors 51-50 at the Phoenix Center in the lone IIAAG basketball game Wednesday evening.

Wendy’s Player of the Game: Tony Quinene scored a total of 17 points and knocked in late game free throws, bringing the FD Friars to a 51-50 win over the St. Paul Warriors. (Photo by Michael Blas)

Friar and Warrior fans weren’t the only ones who flooded the Phoenix Center for one of the most intense basketball rivalries on Guam as current players from all over the league, like the JFK Islanders and Guam High Panthers, along with Russia’s pro basketball team, were all in attendance.

Leading the way for FD was senior Tony Quinene who scored 17 points while knocking in a pair of key free throws in the final 20 seconds to stretch his teams lead 51-47. The Warriors tried to answer, but went empty on three straight attempts from down town before Friar Matt Fegurgur hauled a rebound while getting fouled with just 3.4 seconds left lock up the game.

“It’s always good to play a really good team like this, but it’s just regular season and none of this means anything to us if we don’t win it all. If anything, this win gives us a lot of confidence and shows that all the hard work we’re doing has been paying off so far, but we got to get back in the gym tomorrow and continue to get to work,” said Quinene on picking up the big win.

The Friars have struggled against the top seeds in the Taga Division with their only two losses coming from the JFK Islanders and Okkodo Bulldogs.

FD broke the St. Paul press often which prevented the Warriors from turning the contest into a track meet as they so often do in all of their games. In the half court setting, the Friars attacked the basket and kept their bigs active for a slow and steady approach.

“I don’t think that any team in the league can get up and down the court with St. Paul. They’re ultra talented and the familiarity they have with each other is unbelievable so we knew that running wasn’t going to be an advantage of ours. But we felt like we could attack and break their high pressure and the game plan from there was to get high percentage shots, until they pulled the pressure back,” said Friars head coach Eddie Pelkey.

“We know that [St. Paul] likes to get out and run so we tried to play to our strengths. We’re really confident in our sets and we feel like if we can get into our offense then we can do anything we want,” said Quinene on the teams attack.

The Friars forced the Warrior offense to beat them from the perimeter with the 6’7″ Fegurgur rerouting shots in the paint.

“If we can keep Fegurgur around the rim then it’s going to be real difficult to score on us unless you shoot the ball lights out from the three point line,” added Pelkey on his teams defensive ploy.

Warriors start guard Jahmar White scored a game-high 20 points, but didn’t net his first bucket until late in the 2nd quarter after getting fouled from the three-point line at the 2:21 minute mark. The Warriors only lead of the game came early in the 3rd quarter after forward Nich Fermin converted a layup to go up 33-32. Quinene immediately answered to recapture the lead on the next possession giving FD the wire-to-wire lead for the rest of the contest.

Friar Christian Taitano scored seven of FD’s first nine points to get the home team off to a hot start. Two layups and a deep three from Taitano was answered by two shots from Warrior Reo Aiken as FD held a 9-5 early lead.

Moments later, Quinene would get fouled on a drive to the basket with his attempt sailing over the rim. He approached the line for a pair of routine free throws, but the baseline official called the basket good which garnered reasonable frustration from the Warriors sideline. The puzzled scorers table got confirmation from the official that the basket was good, giving Quiene a three-point play after converting the free throw to put FD up 14-6 in the 1st.

The Friars started to beat it up inside the paint with Fegurgur and Brandon Soriano stringing together three straight layups to go up 22-16 early in the 2nd. White would score his first bucket after getting fouled on a three point attempt, but the Friars would close the half strong with a layup from Soriano and Kyle Camacho to hold a 30-26 halftime lead.

St. Paul Warriors Jahmar White hits a two point jumper late in the fourth to close the distance from the FD Friars. (Photo by Michael Blas)

St. Paul opened up the 3rd on a 7-2 run to take their first lead off the Fermin bucket. Quinene would get in the paint to retake the lead, which would be extended by Camacho with FD up 39-33 with three minutes left in the quarter. Fegurgur wouldn’t give the Warriors much breathing room down low forcing three missed layups with FD still in control 39-35 through three.

FD would grab their biggest lead off a Quinene layup 43-35 in the first two minutes of the 4th. Taitano would score his ninth point under two minutes, flipping up a shot over his shoulder to hold a 49-43 lead.

White would get to work by converting a contested jumper in the lane followed by an even tougher layup to get within 49-47 with under a minute left. The Friars would burn a timeout and play keep away to let 20 seconds shave off the clock before the Warriors were forced to foul Quinene where he would ice the game.

Warriors Brandon Miranda would nail a last second heave from deep, but the score would be just out of reach for the final 51-50.