In a tightly contested matchup between the JFK Islanders and FD Friars, the Islanders would come out on top, securing a 51-49 victory in FD territory. Free throws proved to be a significant difference maker in the game’s outcome as the final points were taken at the charity stripe. 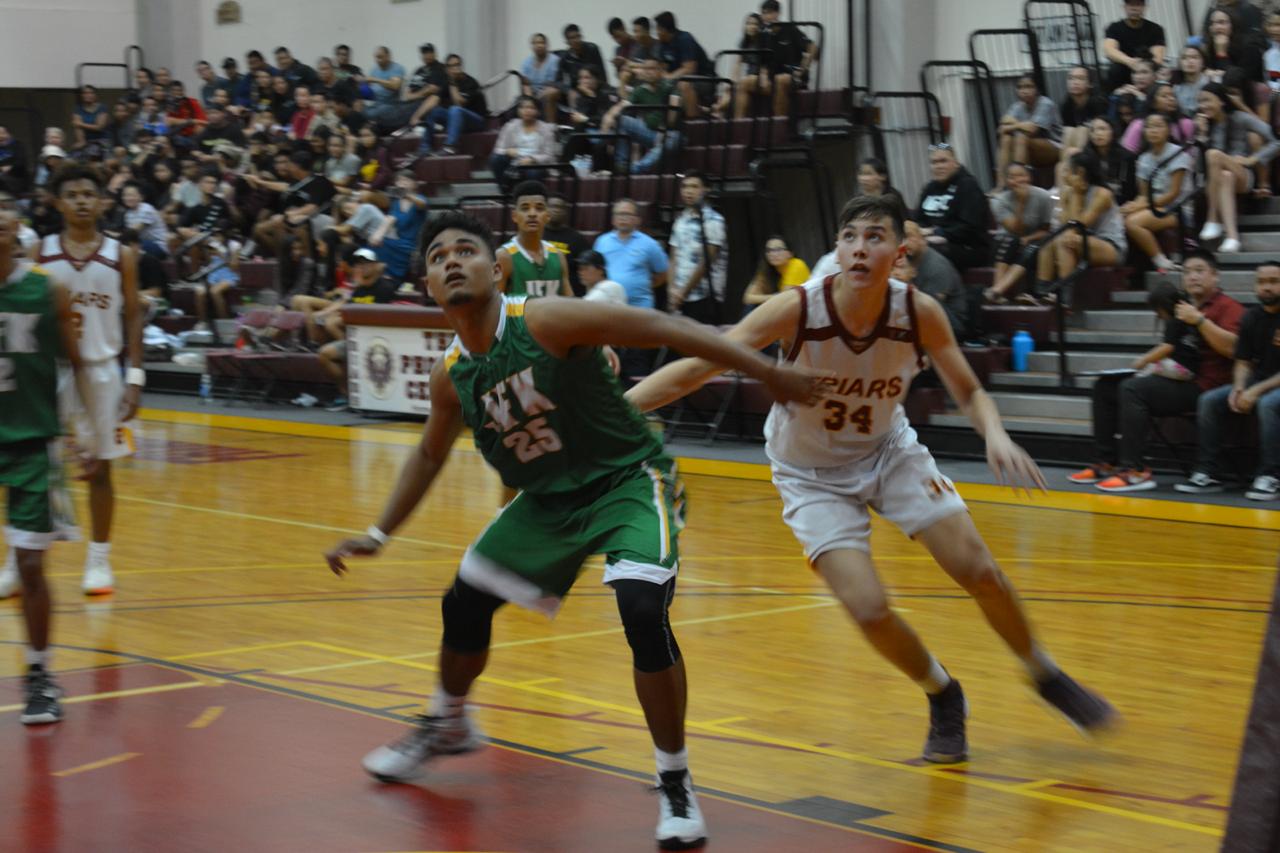 In a tightly contested matchup between the JFK Islanders and FD Friars, the Islanders would come out on top, securing a 51-49 victory in FD territory Tuesday night. Free throws proved to be a significant difference maker in the game’s outcome as the final points were taken at the charity stripe.

Tensions began to heat up in the final quarter of regulation as both teams were anxious to win in a possible playoff preview matchup.

With 4:20 left to play, FD head coach Eddie Pelkey received a technical foul after pleading with refs following a questionable call that gave JFK possession of the ball. The technical would send Islander

Jerry Ngiraremiang to the free throw line where he converted on both shots to stretch the lead to five at 43-38, while also gaining possession after the play.

The Islanders’ largest lead of the game came at the beginning of the 4th quarter, following a mid-range jump shot from Jeremiah Taitingfong which stretched the lead to six. But great defensive energy by the Friars would keep them in the game with an opportunity for redemption following a Saturday night loss to the Bulldogs.

A key steal by Friars guard Matt Santos and a finish on the fast break made the game a one possession ballgame at 45-42. On the following Islanders possession, Ralf Manalac went up for a shot in the interior but was blocked by FD big man Matt Fegurgur. The ball deflected off the Islanders and gave FD possession with 2:20 left to play.

The Friars trailed by five points with 1:00 left to play and looked to Senior Brandon Soriano to make some plays. After a timeout, the Friars put the ball in Soriano’s hands where he drove right side and sunk an interior jump shot, shrinking the deficit to three at 49-46

On the following FD possession, Soriano would find himself with another opportunity to score, finding an open lane to the basket and converting on the layup. The shot put his team within one at 49-48, with 37 seconds left to play.

While attempting to break FD’s full court press, the Islanders tried for a ‘Hail Mary’ pass to Ngiraremiang, but the pass was overthrown and gave FD possession with 35 seconds left to play.

Soriano was fouled on a shooting attempt a possession later, with a chance to tie the ballgame. He was successful and converted on 1-2 free throws, tying the game at 49-49 with 20 seconds left.

A costly foul by the Friars would send Islanders guard Ralf Manalac to the free throw line, with a chance to break the tie with only 16 seconds left to play. Manalac converted on both free throws, despite a loud FD crowd that attempted to break his focus.

Manalac described his ability to stay composed during the free throws that gave his team the lead,

“Every day after practice our coach has us work on free throws for about 15 minutes. So, when game time comes the shot falls naturally.”

With 16 seconds left to play, the Friars had multiple opportunities at the basket to either tie or take the lead.

Isaiah Pelkey had a good look at a three-pointer from the left corner but failed to convert. FD was able to regain possession, after an offensive rebound and a jump ball. On the inbounds pass, Friars Caleb Espaldon had an open look at the basket but swung the ball to his right. Teammates would look to Soriano to tie the game, but a good contest in the paint by the Islanders would prevent a score as the final buzzer sounded.

Both teams had slow offensive starts in the first half. After the 1st quarter, FD led 8-7.

In the following quarter, FD had multiple opportunities to get out in front of the Islanders but shot inefficiently from the free throw line. Midway through the 2nd quarter, the Friars had missed 10 of 13 free throws.

The Islanders capitalized on the offensive end with Jerry Ngiraremiang running the point. Ngiraremiang closed out the 2nd quarter with a deep three-point buzzer beater which put his team up 24-20 going into the second half.

Ngiraremiang led all scorers with 13 points, shooting 6-of-8 from the free throw line, and earning Wendy’s Player of the Game.

Matt Fegurgur led FD’s scorers and secured a double-double with 11 points and 13 rebounds.

“We feel like this is a signature win for us. We played our hearts out and it was a great win for our team. We just need to keep working the momentum going in practice. We can’t get complacent because each game is going to get tougher.” – Ralf Manalac

The Friars JV team remain undefeated after a convincing 61-45 victory over the Islanders. Friar Jeremiah David led all scorers with 11 points on 4-of-9 shooting.