The ND Royals and St. John’s Knights put on another memorable night of volleyball in their first meeting in 2019. 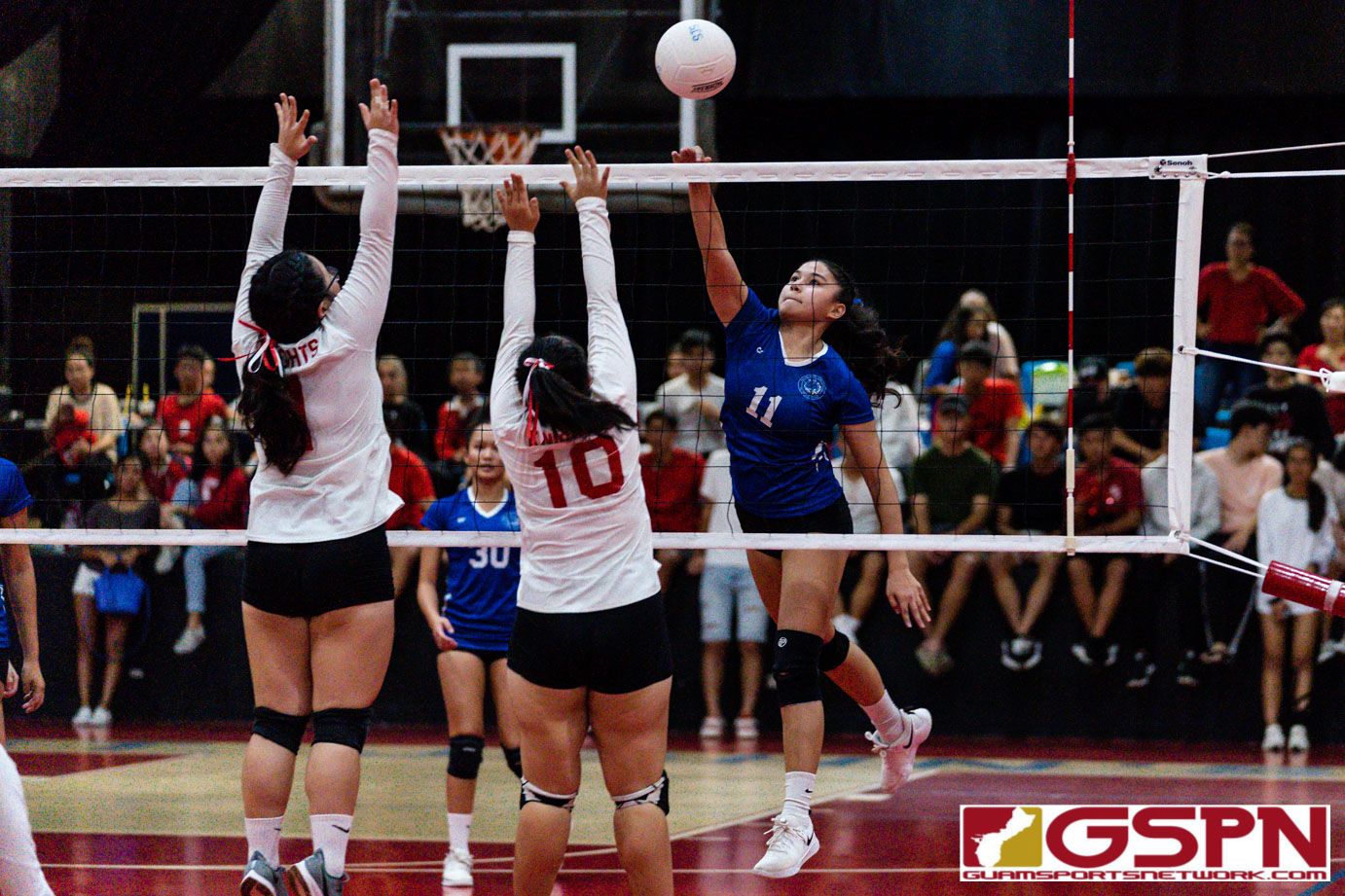 Royal’s Austia ‘T.N.T.’ Mendiola had a big night with 15 total kills and six aces and setter Nicolette Perez gave the team a boost in momentum with big-time plays. Perez and teammate Minami Rabago had four kills and Gia Camacho had three.

After dropping an error-filled opening set, the Royals took two straight to hold a 2-1 set lead. Momentum shifted right back to the home team after the Knights unloaded on the Royals in the 4th 25-11 led by Hallie Wigsten’s four kills.

“Okay so… we got too comfortable on how we won the 3rd and we were a little too excited. We just had to chill. We were a little scared after that 4th set because that was definitely not it,” said Perez on the Royals horrific 4th set.

In the 5th, ND took a 5-3 lead after Mendiola would lock in her 14th kill and the Royals never looked back. Perez would get her fourth kill of the night on a hit up the middle for a 9-5 advantage and the game would end on a serve ace from Minami Rabago 15-9.

The Knights had a strong offensive outing as a team led by nine kills from Wigsten, eight kills from Angeline Del Carmen, seven kills from Tylee Shepherd and five kills from Jadyn Palomares.

ND turned to Perez when starting setter Gaby Piper went down with a season ending injury before the start of the season, a position Perez has never grown accustom to playing. As her team is still rocking an unbeaten record thus far, Perez has appeared to adjust well to her new role.

“It’s not been easy, but I have to get through this season. I can’t get down on myself being a setter because my team needs me,” said Perez.

The Knights broke away from a shaky Royals set with Shepherd serving a 6-0 run for an 18-10 lead. Mendiola would get a pair of aces late in the set down 23-18, but 17 total errors from ND would prove too much to overcome. St. John’s would get kills from four different hitters and committed just eight errors.

ND would get their offense on track in the 2nd set. Rabago would serve during a 6-0 run where Mendiola would grab a pair of kills for an 18-13 advantage. The Knights would struggle at the service line as the Royals bounced back to tie the sets.

Both teams would pick up their gameplay in the 3rd set as they battled to an 18-all game. Perez would then make a pair of big blocks that would energize the team to eventually win the set. St. John’s Wigsten took full advantage of an overpass and wound up for one of her powerful hits on a free ball. Perez, the setter, would get two hands on the ball for a big block to get the crowd and team riled up, but the Knights would recover to keep the ball in play. Another overpass from the Royals on the same point set up Wigsten for another free shot, but Perez met her at the net again and turned it back for the second block to which the Royals would get the eventual point 19-18 to really send her Royal teammates and crowd into a frenzy.

“I was just saying ‘please God help me’,” said Perez on challenging Wigsten at the net. “After that, I was just telling my team that we had to get back in this game and we can’t focus on that play because we could still go down.”

St. John’s had quite the response in the 4th set, completely dominating the set 25-11. Up 11-6, St. John’s would go on a 7-0 behind the serving of Aprile Kim for an 18-7 lead. Kim would grab two aces in the run and the Knights hitters would fire away with 11 kills against the stifled Royals.

Mendiola would come up big in the 5th with two kills and an ace as her team held a 10-5 lead. St. John’s got a massive kill from Shepherd to pull within 12-8, but unforced errors would hurt the Knights as Rabago would give ND the final point on an ace 15-9.

The Royals don’t suit up until October 4th against the GW Geckos while the Knights battle Tiyan next week Tuesday.