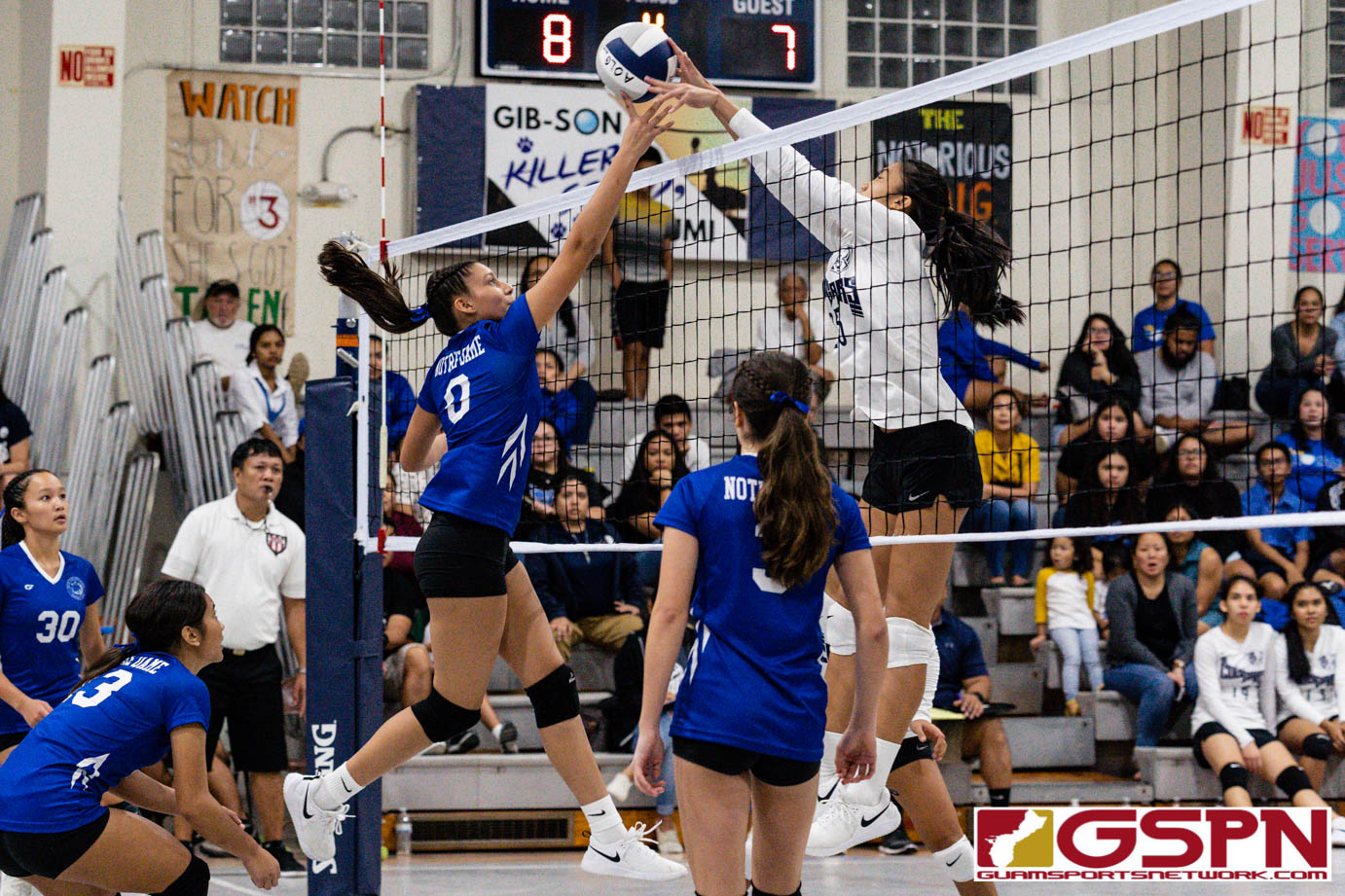 The defending champion ND Royals were tested for the first time this season after battling five tough sets against the home team Academy Cougars. Riding the home crowd energy, the Cougars took more sets from the Royals Tuesday evening than any team has so far this season.

ND had lost just one set all season heading into the night and the Cougars were threatening to hand the undefeated Royals their first loss of 2019. There’s just something about the Cougar atmosphere that the Royals admitted to struggling with, whether it be the crowd or the inspired play from their team each and every time.

“[Academy] is always so good and they play to the end with all heart no matter what. We knew that coming here would be a struggle, especially with their crowd because they always go all-out, but we had to focus on just playing us,” said Mendiola.

And heading into the final set, the champions mentality kicked in for ND.

“Our mood just changed. We had to forget about what happened prior and instead focus on what we could do now,” said Rabago on her team heading into the do-or-die 5th.

The Royals burned all of their timeouts in the game, which is uncanny for the team and coaches Mike Rabago and Art Stanley. The strategy paid off as the girls were able to collect themselves in the final two sets to close it out.

“The message was that we needed to relax. Our vibe was down and we weren’t really having fun with the game. [Coach] told us to continue to have fun, continue to play our best and just try our hardest,” said Minami on their focus in the huddles.

The opening set was full of misfires for the Royals with 10 of their 18 errors coming off of hitting. ND would trail 22-18 late in the set, but Mendiola would get to work with an ace followed by a kill a point later to complete a 6-0 to go up 24-22. Errors would doom the Royals with Academy closing the 1st on a 5-1 run to steal the set.

ND would lead for majority of the 2nd set with Gia Camacho leading the way with three kills in the set. Serving prowess from Mendiola down the stretch would knot the sets at one apiece.

Academy started to ramp up their intensity in the 3rd. Despite trailing 10-5 early, the Cougars managed to tie the game at 17, taking their first lead 18-17 off a Royals error. Cori-Nicole Paulino would get a kill for the Cougars to go up 23-19 and Serrano would get a two-handed block for the final point to put the Cougars up in sets 2-1.

The 4th set belonged to Mendiola where she exploded for eight of her 18 kills. Mendiola would notch her eighth kill to give her team a 23-20 lead with teammate Rabago ending the set on a much needed kill 25-23, her second of the set.

Royal Heaven Reyes would have a big moment in the 5th set as her serve-ace would just barely get in on the backline to give ND a 13-10 lead. Salas would answer for the Cougars with a big kill up the middle, followed by a big swing from Paulino to get as close as 13-12. An error by the Cougars followed by a kill from Rabago would end the game, keeping the Royals unbeaten streak alive.

“Our energy was really up in the beginning, but when we started to go down we started to act like the game was over. That’s why towards the end the whole team was just non-stop cheering and we all had to keep our energy up,” added Austia.

ND will travel to Tiyan Friday while the Cougars will get the weekend off before playing those same Titans next week Tuesday.