In a battle for the First Seed of the Taga Division, as well as homecourt advantage in the playoffs, the Warriors defeated the JFK Islanders 62-48, winning their final game of the regular season in dominant fashion. 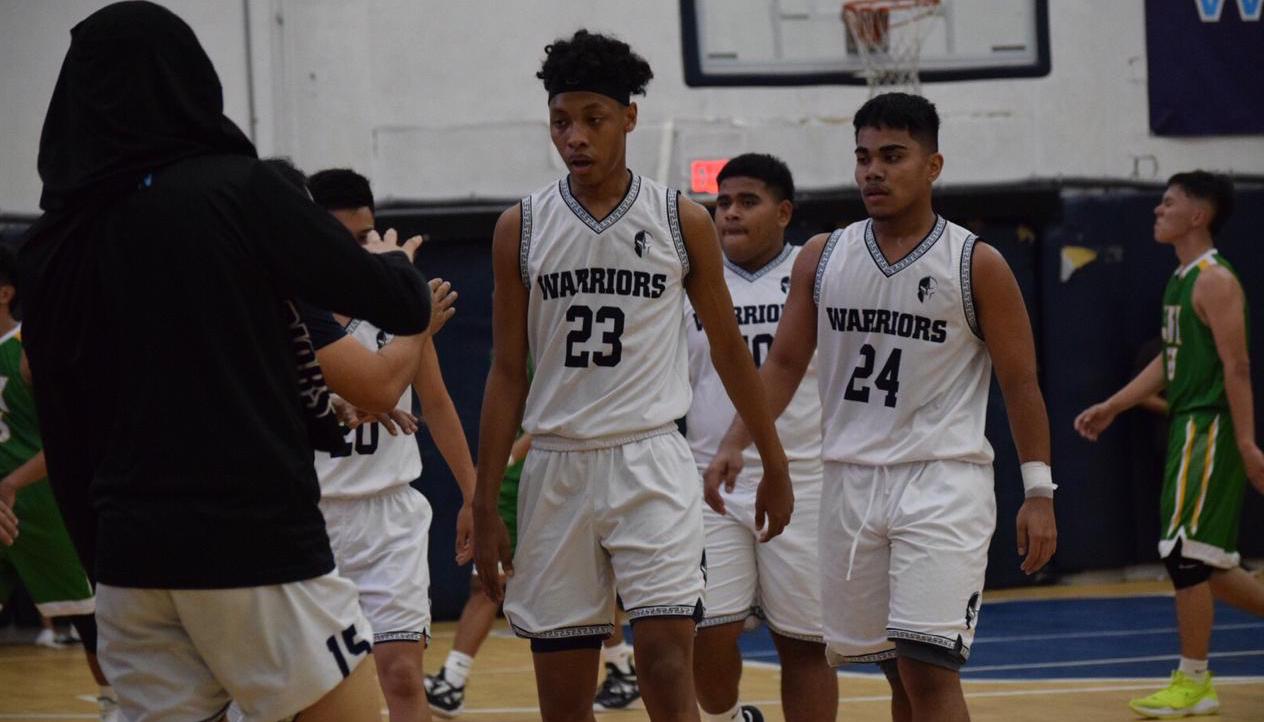 In a battle for the First Seed of the Taga Division, as well as home court advantage in the playoffs, the Warriors defeated the JFK Islanders 62-48, winning their final game of the regular season in dominant fashion.

The final score does not tell the entire story, however, as both teams put on a show with a full crowd at St. Paul gym in attendance.

It was not until the end of the 3rd Quarter that the Warriors began to pull away by large margins. Before then, the game was highly competitive and anyone’s ballgame.

The matchup would come down to who would make the least amount of mistakes, and it seemed as if the Warriors could do no wrong on both ends of the floor. When the Islanders made little mistakes, the Warriors were quick to capitalize which allowed them to build a large lead in the second half.

As the clock began to wind down in the 3rd Quarter, the Warriors only led by eight at 40-32. Then, a huge three by Reo Aiken would increase his team’s lead to double digits. The play would spur a 7-1 run to close out the quarter. Teammate Brandon Miranda continued the run, using his speed to convert on two fast break layups despite being heavily contested on both attempts.

The game started out with an exciting first quarter of action by two of the most explosive offenses in the league. The Warriors began the game with a 6-0 run, which was highlighted by a Jahmar White three-pointer in the face of Islanders big man Lawrence Tisalona. White also had an ankle breaking play on Islanders King Karl De Mesa which delighted the home crowd. The Islanders did tighten up their defense on Jahmar thereafter, holding White to just 14 points in total, in addition to a scoreless 3rd Quarter.

The Islanders took a while to get comfortable offensively and did not develop a rhythm until the end of the 1st Quarter. However, they were able to close out the quarter with a 7-0 run, taking the lead to end the quarter at 14-11.

Islanders Jerry Ngiraremiang had a big first half of basketball and started to get hot after nailing a fast break three off-of an assist by teammate Jeremiah Kintoki. After the three, a steal by Ngiraremiang would lead to a fast break finish in transition. Ngiraremiang finished the night with 12 points and four assists.

The Warriors ability to shutdown Islanders deadeye shooter in Jeremiah Kintoki would be instrumental to their victory, as Kintoki is usually highly efficient from deep. Whenever Kintoki got the ball, the Warriors were quick to double him which eliminated his sweet spot from the corner. And when Kintoki did find shots, he was unable to convert as the Warriors applied a tremendous amount of pressure on defense. Kintoki would not score at all throughout the game, shooting 0-of-7 from the three-point line.

Reo Aiken elaborated on preparation for the matchup:

“We knew that coming into this one, whoever won would be the top seed. Winning this game was very important to our team because homecourt advantage is crucial. We watched film all week to prepare for the challenge.”

The shutout of Islander’s deadeye shooter in Kintoki, would force the Islanders to look for offense elsewhere, and Forward Chris Morikami would step up to help his team generate some offense. Morikami finished the game with 11 points.

The Islanders also got great effort on the glass from big man Tisalona as he finished with 11 rebounds and nine points.

After a scoreless 3rd Quarter, White would erupt with a nice move to the basket for a layup, which was followed by a deep three-pointer a possession later. Aiken continued the run, scoring inside to build the lead to 17. In the game’s final minutes, both teams emptied their benches. The home crowd was pleased with the Warriors performance, showing their satisfaction with applause in the game’s final seconds.

Controversy surrounding St. Paul’s forfeit to GW was not easy news to hear for either St. Paul or their players, but with this win, the Warriors secure the top seed in their division,

“We wanted to play GW, our team loves any chance to go out and compete. But to be able to win this game and secure the top seed also means a lot against a great team in JFK.” – Reo Aiken

The FD Friars already had the Gadao Division on lock but that didn’t stop them from putting on a show against the Guam High Panthers, starting from the sideline. Head coach Eddie Pelkey had all eyes on him and his attire as he sported a shirt that stated “I coach for my players” on the front and “I’d rather lose on the court than win on paper” which correlates to his team being handed a forfeit just two days ago.

The Friars handled the Panthers, beating them 66-42 with a balanced scoring load. Brandon Soriano scored 13 and teammate Kyle Camacho added 12. Panther Corey Brown was the high man with 15 points.