WARRIORS PULL AHEAD IN BATTLE WITH BULLDOGS

Two of the leagues top teams went to battle Friday evening between the St. Paul Warriors defeating the Okkodo Bulldogs. 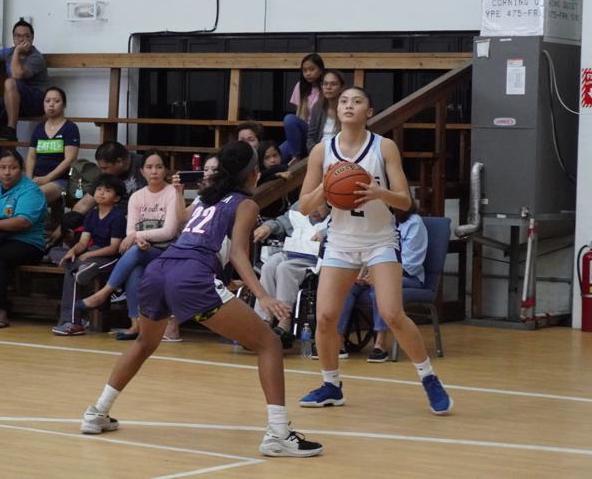 Janniliese Quintanilla nearly recorded a quadruple-double helping the St. Paul Warriors defeat the visiting Okkodo Bulldogs 55-54 in the IIAAG Girls Basketball League. Quintanilla’s stat line was 16 points, 12 rebounds, nine assists and seven steals. The Warriors needed each and every bit of her stats to hold off the talented Bulldogs.

Both teams entered the contest with identical 3-0 records. It was an early season game, but the victory in favor of the Warriors may impact playoff seeding next month during the playoffs.

“Okkodo is a really tough team because their post players and their shooters are really good,” said Quintanilla.  The Warriors had a tough time scoring in the paint against the Okkodo bigs who won the rebound battle.

“Our coaches strategy is always defense first and offense will come,” added Quintanilla. The Warriors thrived on defense, forcing 19 turnovers to remain undefeated.

Quintanilla was all over the court to start the game, recording all of her seven steals in the first half as St. Paul led 31-22 at halftime.

The Bulldogs led by as much as 12 points in the second quarter but back-to-back three-point baskets from Amaiya Fontanilla and Jasmin Solang kept the Bulldogs within striking distance.

The Bulldogs continued to bite back in the third quarter with post player Angeli Dacanay scoring in the paint and Fontanilla making plays on defense that turned into lay-ups for Okkodo.

Fontanilla was plagued with foul trouble and was forced to sit later in the third quarter and the Warriors took full advantage. St. Paul’s Kirsten Silva sank a running floater and later dished out an assist to Monica Giger to go ahead by nine points.

The Bulldogs started the fourth quarter scoring two quick baskets with Fontanilla and Jastine Samson scoring lay-ups as they trailed 40-45.

Kayla Senne from St Paul ended the run but her bucket was answered by Dacanay. Silva later hit a free throw and Fontanilla countered with a reverse lay-up.

After both teams traded baskets, Fontanilla committed her fifth foul and was forced to watch the rest of the game from the bench.

Despite having a key offensive weapon out of the game, the Bulldogs managed to force a turnover with Anjanette Ponce recording a mid-court steal and dishing to Dacanay for the easy lay-in, trimming the lead to 50-52 with under two minutes remaining.

Giger clutches a tough runner courtesy of an assist from Silva to lead 54-50 with 90 seconds remaining. The Bulldogs looked to push the pace but Quintanilla denied a shot under the basket.

The Warriors are unable to seal the victory with less than a minute remaining, missing key free throws which allowed the Bulldogs to score behind another bucket from Dacanay. St Paul went up 54-52 at this point of the game with less than 20 seconds remaining.

The Bulldogs are forced to foul and Quintanilla hit one of two free throws to lead 55-52. Okkodo’s Racquel Camacho got a descent look from three-point land to send the game to overtime but her shot is short. Solang grabbed the rebound and nailed a long jumper as the buzzer sounds, but it wasn’t enough as the Warriors held on for the 55-54 victory.

Giger had a double-double with 10 points and 10 rebounds. Silva had nine points and four assists, Carissa Eter contributed eight points for the undedeated Warriors.

“Coach (Paul Pineda) always tells us to play good defense. Whether we won or lost this game, our goal was to make sure we play good defense and progress from there,” said Giger. “When we play them again, we would have to make adjustments on offense and drive in more instead of settling for outside shots”.

Bulldogs win JV Game
Alaya Fontanilla, younger sister of Amaiya, helped the Bulldogs come back to defeat the Warriors. Alaya scored 8 of her 17 points in the fourth quarter to help the Bulldogs win 44-38.