In an interdivisional IIAAG Boys Basketball matchup between the St. Paul Warriors and Okkodo Bulldogs, the Warriors would grab the win 64-50 Tuesday night, bouncing back from a Wednesday night loss to the FD Friars. 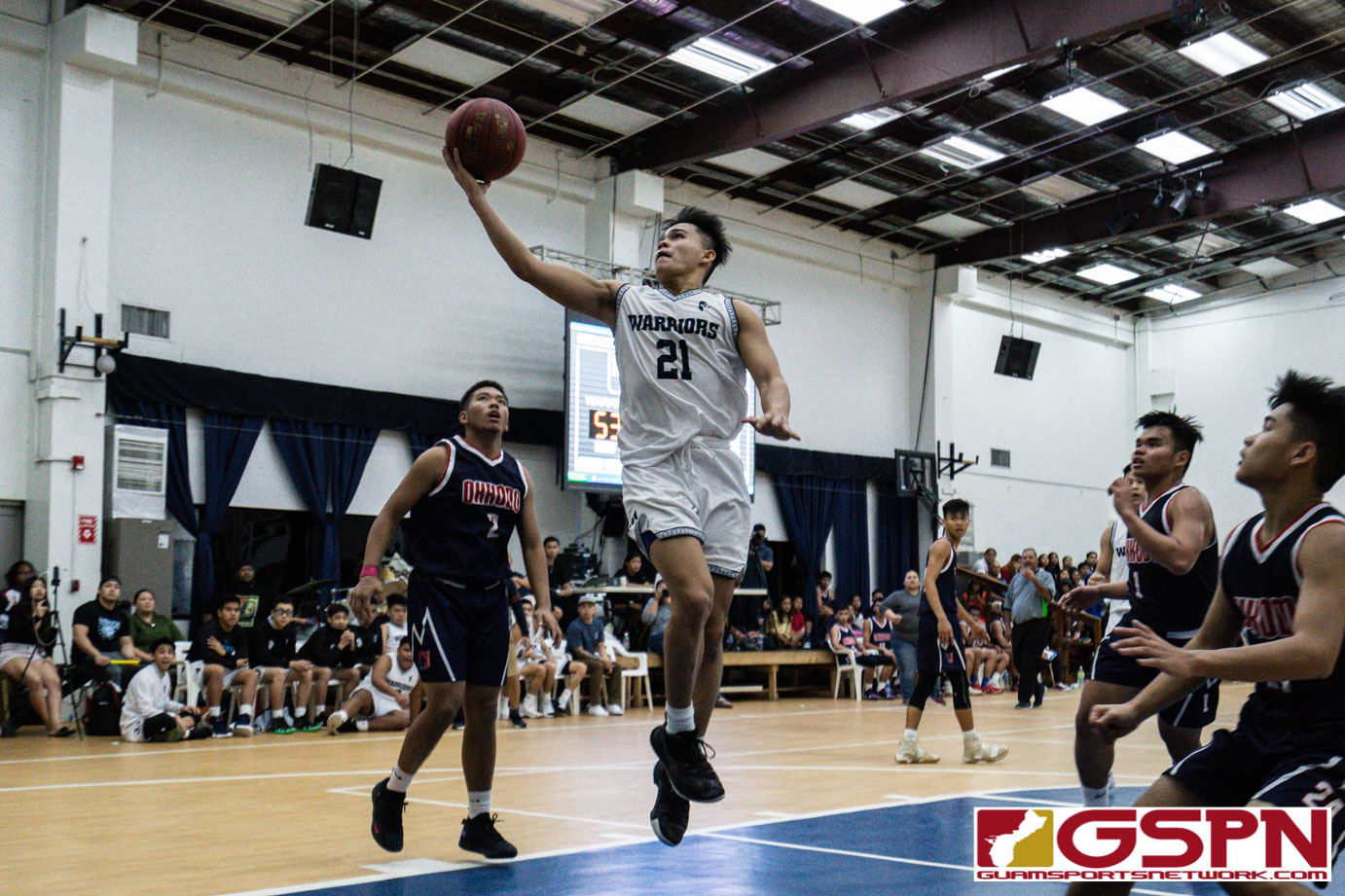 In an interdivisional IIAAG Boys Basketball matchup between the St. Paul Warriors and Okkodo Bulldogs, the Warriors would grab the win 64-50 Tuesday night, bouncing back from a Wednesday night loss to the FD Friars.

Wendy’s Player of the Game: Jahmar White led the St. Paul Warriors with 28 points and three steals in their 64-50 win over the Okkodo Bulldogs. (Photo by Michael Blas)

The Warriors began to pull away in the 3rd Quarter in dominant fashion. They played aggressive defense, had crisp ball movement, and demonstrated great team chemistry in transition. St. Paul built a 15-point lead five minutes into the 3rd Quarter. The Bulldogs, like they so often do, put up a fight and would not allow the Warriors win comfortably.

In the previous matchup between these teams, Okkodo came back from a 25-point deficit and made the game a one possession ballgame before the Warriors held off their comeback. St. Paul, being well-aware of Okkodo’s ability to comeback from behind, continued to apply pressure when Okkodo seemed to be gaining any sort of momentum.

Okkodo’s Jon Michael Lorena was instrumental in keeping his team within striking distance throughout the game. On each offensive possession, Lorena stayed persistent in the paint and racked up offensive rebounds, making the most of his second chance opportunities and finished with 23 points and nine rebounds.

A momentous shot by Okkodo sharpshooter Nico Bonita would cut his team’s deficit to 10 in the final minute of the 3rd Quarter.

But in the final seconds of the quarter, a three-point buzzer beater by Warriors Jahmar White would allow the Warriors to regain momentum, giving them a 13-point lead at 51-38 going into the fourth.

White had several key baskets throughout the game whenever Okkodo started to cut into the lead. He talked about stepping up when the moments matter,

“Those are just the moments that you live for on the court. Many of us on the team like to play for the big moments and it’s always a good time trading buckets.”

After leaving the game momentarily due to a scrape opening up, Warriors Point Guard Thelo Orichiro returned in the fourth quarter, continuing his all-around performance to help his team win by a large margin. Orichiro played efficiently throughout the game, doing a little bit of everything to ensure a Warriors victory.

The Warriors continued the pressure in the 4th Quarter and would lead by as much as 20 points. A transition layup by White would put the Warriors up by 17 with a minute left to go. Okkodo had several looks from deep, but bricked on many of their attempts. With 20 seconds left to play, Bonita hit a three from deep to cut the deficit to 14. But the game was out of reach and the Warriors would go on to win 64-50.

In the first half, the Warriors minimized their mistakes, and forced Okkodo turnovers in the half-court setting. They were efficient in transition and moved the ball to find the open man.

Okkodo kept the game within reach with second chance points in the paint. Lorena led the charge, scoring 13 first half points which came solely from shots in the interior. The Bulldogs, who are usually a threat from the three-point line, struggled to get a rhythm from deep, as the Warriors perimeter defense was airtight throughout the ballgame.

White talked about how his team learned from their first loss of the season, last week, and how they were able to come back from the loss and stay composed in this matchup against Okkodo,

“I think that the loss was a big wake up call for our team. We’ve been on a win streak, and that loss taught us that we can’t get complacent.”

“I think that the loss was a big wake up call for our team. We’ve been on a win streak, and that loss taught us that we can’t get complacent.”