The GW Geckos busted the FD Friars nearly four-season long IIAAG rugby winning streak in dramatic fashion, with a walk-off try to complete a 14-8 comeback victory. Wednesday’s meeting of high school rugby power houses was in familiar setting as both teams were coming into the day undefeated. 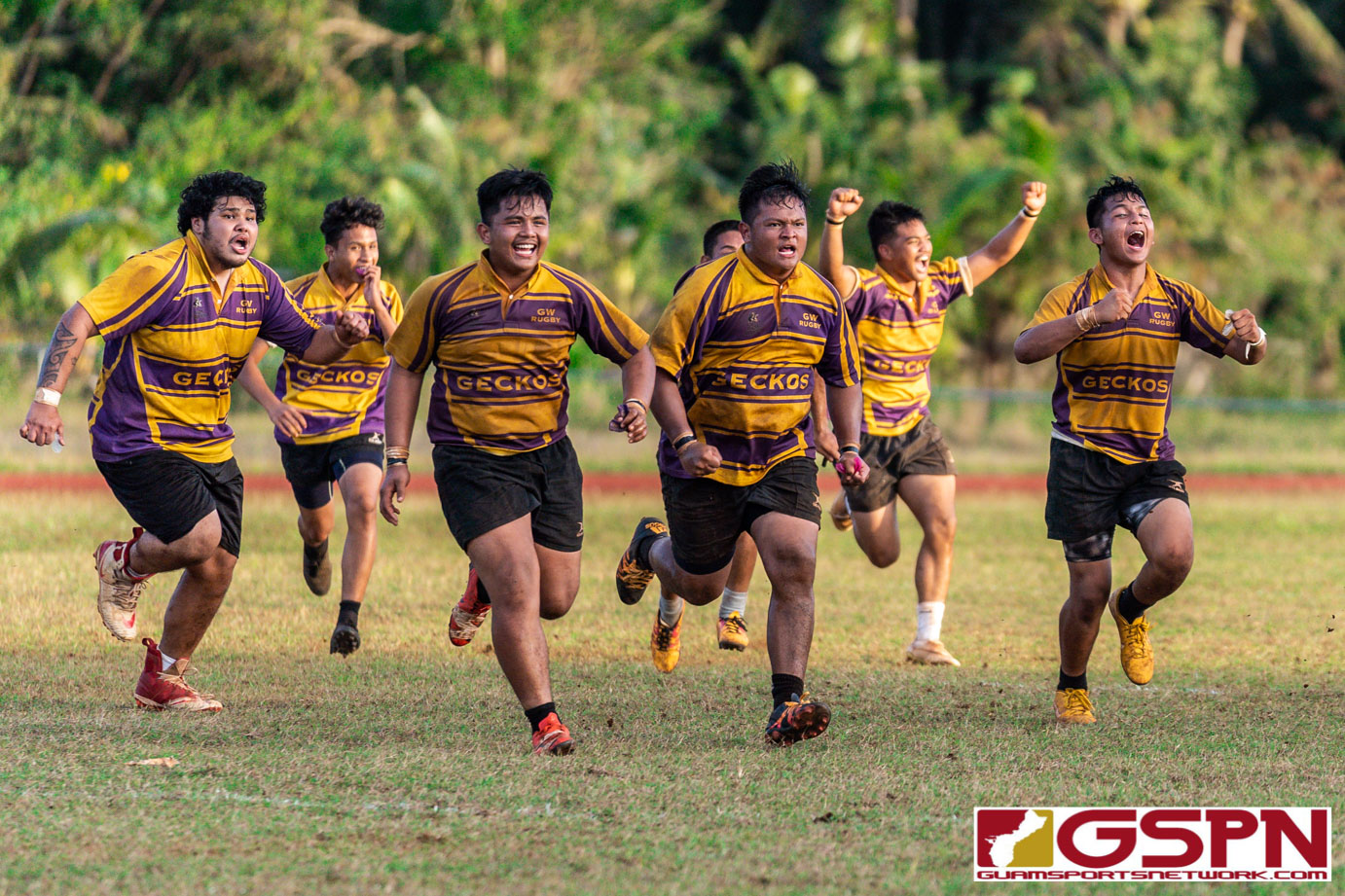 The GW Geckos busted the FD Friars nearly four-season long IIAAG rugby winning streak in dramatic fashion, with a walk-off try to complete a 14-8 comeback victory. Wednesday’s meeting of high school rugby power houses was in familiar setting as both teams were coming into the day undefeated.

Wendy’s Players of the Game: Jerome Quichocho, left, and Joe Lujan, right, both scored tries in the final moments of the game to defeat the FD Friars 14-8. (Photo by Michael Blas)

The Friars had gotten the better of GW for the past three-and-a-half seasons, and were staring down another victory holding an 8-0 lead with just over 10 minutes left in the game. Then the Geckos made their move.

A big return from Espino allowed the Geckos to invade Friar territory following a Friars kick. Three Friar penalties allowed GW to power in a try from Joe Lujan up the middle, followed by a successful conversion from Kaito Abuta to get within 8-7.

The Geckos wasted no time as they kept the pressure on the Friars in short space. A kick up the middle by the Geckos was dropped by Friar Noah Diaz to set up a momentum swinging play. GW took charge and marched up the right side of the field before Jerome Quichocho dove in for the try amidst a host of Friars and Geckos.

The try in question was so close to the out of bounds sideline which required a conversation between the sideline ref and head ref. The head official on the ball signaled the try good after the discussion as the Geckos erupted in celebration. Abuta knocked on the insurance conversion to complete the 14-8 comeback.

“We just told all the boys that we needed to get it done,” said Lujan on his team facing the 8-0 deficit. “We knew that the end of the game was close, but the hype held us up and we finished.”

Quichocho had to make good on the game-winning try after leaving points on the field early in the second half. Quichocho made a heads up play by snatching a loose ball right in front of the Friars try line, waltzing in for a seemingly easy score. However, the quick legs of Quichocho carried him past the scoring zone as he dropped the ball out of bounds.

“My teammates were riding me on missing that try. I had to get one back for them. I owed them one,” said Quichocho.

The Friars got on the board late in the first half after Adryan Lujan used a fake pass to get past the Geckos backline. A failed conversion left the score 5-0. FD scored their second points in the second half after Joseph Green nailed a 35-yard conversion to get up 8-0. Penalties would hurt the Friars down the stretch after a yellow card and knock-ons gave the Geckos room to work.

“We motivate ourselves in practice everyday. It’s a big difference from our previous years and we’re always working to get better. I’m proud of what we were able to do today,” said Quichocho.