Saturday’s rugby games in the GRFU/ISA were met with some rainy weather. 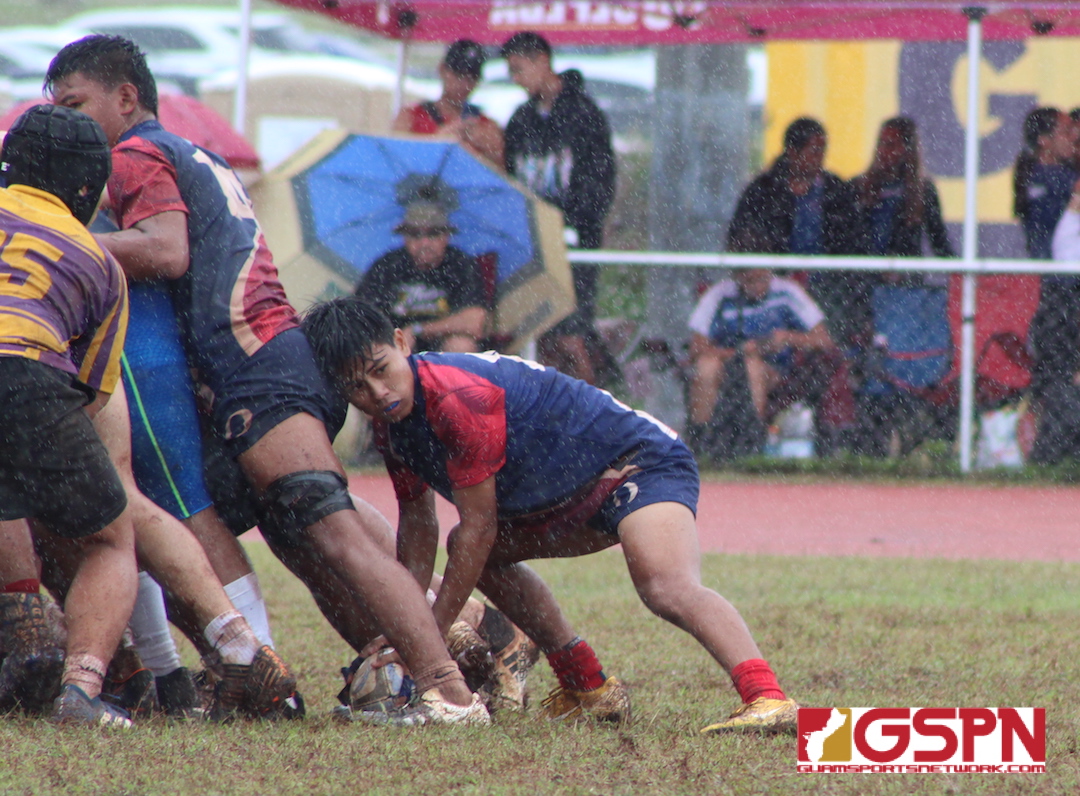 Week 2 of the GRFU/ISA High School Rugby Season took over the GW Field Saturday morning with the rainy weather setting the stage for another big day of games.

The Okkodo Bulldogs defeated the defending Champion GW Geckos in the boys varsity division and the Academy Cougars bounced back from a rough opening week.

The Geckos and Bulldogs were dead locked at five-all by halftime after a try from GW’s William Rios and Okkodo’s Adrian Lacap highlighted all the scoring in the first half.

As Bulldog freshman Jayven Mendiola stood on the sidelines watching his team put it all on the field, he couldn’t wait to officially check in the game after forcing to sit out the first half. Mendiola plays swing and was needed on the JV team earlier in the week, playing a half of sevens which forced him to sit out in the first half of Saturdays big game against GW.

“I was told that once I step on the field at JV then it already takes away on half of varsity, but JV needed a little help. But I decided to play the second half so we can come back stronger,” said Mendiola, who scored the late try to beat the Sanchez Sharks last weekend.

Mendiola would provide all the second half scoring for the Bulldogs, converting on two field goal kicks off penalties from 30 and 40 yards out with some room to spare.

“I practice kicking from further range in practice so when it comes time for it during the game, it feels a little easier for me,” added Mendiola.

The weather proved tough for both teams as knock-ons and dropped passes were plaguing both sides.

“The ball had zero grip and we kept asking the refs to change the ball, but if we couldn’t then we just had to go on with what we got. We just did our best and came away with a ‘W’,” said Mendiola.

GW came within 10 yards of scoring the possible go-ahead try late in the half with the team riding behind big-man Aaron Toves on two penalties. The Bulldog defense held up on both ends forcing turnovers less than five yards within the try line to preserve the win.

After falling to Okkodo and tying against the Southern Dolphins and Guam High Panthers last weekend on late-game scores, the Cougars were more than determined to right their previous wrongs. Cougar Makayla Atoigue would score two tries on the day along with making all her conversions as the Cougars started off Week 2 with a 14-5 victory.

“It was definitely motivation,” said Atoigue on putting last weekend behind them. “All week all we thought about is being so close and not being able to secure it. Being close is never good enough, you always want that victory.”

Atoigue’s first try came in the first half after a series of passing lead opened up a seam on the left side.

“You have to have full field awareness and I just took advantage of the perfect opportunity, and that’s how rugby is,” said Makayla on her first score.

Her second try was a 40-yard dash in the second half after a swing pass to the outside opened up a wide gap up the right sideline where Atoigue showcased her speed to go up 14-0.

The Cougars were bruised and a little bloodied in their win against Okkodo but their will to win proved greater than their physical anguish.

“We’re working. We may be at the bottom, but we do strive to get higher. Everything that happens, we go through during practice and work harder for the next weekend to become even better,” added Atoigue.