The Guam Basketball National Championships concluded their semifinals Wednesday evening at the UOG Calvo Field House with the FD Friars and Guam High Panthers winning out. 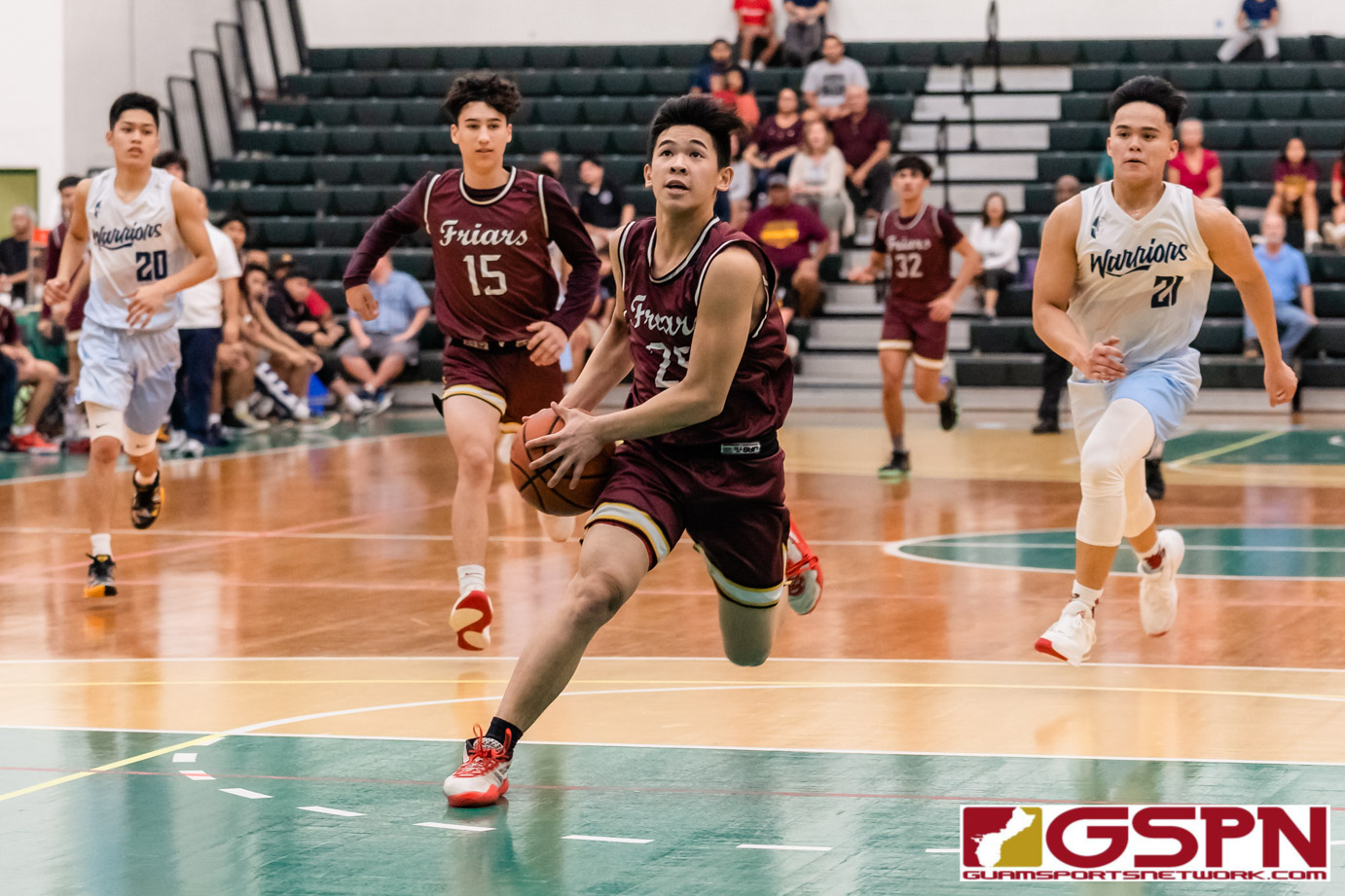 Wednesday evening’s Semifinals in the Guam Basketball High School National Championships featured a showdown reminiscent of last week’s IIAAG Championship night with the FD Friars taking on the St. Paul Warriors and the Guam High Panthers taking on the Harvest Eagles. All four IIAAG teams defeated their ISA opponents in the opening round of the GBC Championships, setting up an All-IIAAG road to the finals.

The Friars were trailing all game long before putting down a big defensive 4th quarter to snatch the victory over the Warriors 49-45 while the Panthers stayed ahead of the Eagles to win 59-52 to advance to the Championship Game.

The Warriors had come out the gates firing, putting the top seeded Friars in a quick 10-0 hole with Warriors stellar guard Thelo Orichiro scoring six of those first 10 points. FD would battle back to take a brief lead in the 2nd quarter off a Daryl Robles bucket, but St. Paul would take the lead into halftime 27-26.

St. Paul came out even stronger in the 3rd period behind streaky shooting from Audrey Dela Cruz, as he nailed a wing three-pointer to ignite a Warriors run. The Warriors would grab another 10-point lead after a bucket from Joel Reyes, forcing an FD timeout with 2:38 left to play in the 3rd.

Orichiro would end the quarter with a bucket off an inbound steal, giving the Warriors a full head of steam leading 41-29 heading into the 4th quarter allowing just three points from FD in the whole 3rd period. Friar’s starting guard Isaiah Pelkey would also foul out of the game.

But then the Friars flipped their own defensive switch allowing just four Warrior points in the final period.

Freshman sensation Blaise Ada and Sophomore standout Nate Perkins-Fuesser would score on layups after back-to-back Friar steals to get the lead back under single digits 41-33.

Ada would then make a statement play as the Warriors were trying to kill clock at the five-minute mark. Blaise would rip the ball from Dela Cruz on the wing before driving on the break while getting fouled for an and-one play to get his team within 43-38.

Warrior Jon Sevilla would convert on a layup to push the lead 45-40 and the Friars would respond with an and-one from Fegurgur to get within 45-43. On the next trip down, Perkins-Fuesser would grab a steal off the inbound and use a euro-step in the lane to tie the contest at 45 with a little over a minute to play.

The MVP Matt ‘Sleek Freak’ Fegurgur would come up with a block on the defensive end and a bucket to put FD ahead 47-45. Fegurgur would come away with another big stop on defense, leading to a dagger from Colin ‘Swag’ Santiago off a left layup for a 49-45 lead.

Fegurgur would finish with 13 points and Robles would add 11 for the Friars leading scorers. Orichiro would net 16 points and Dela Cruz would add 14 in the loss. The Warriors shot 8-of-16 from the free throw line on the night.

Not many people were giving the Panthers much of a chance to make it out of the first round of the Guam Basketball National Championships, but the team conquered the ISA’s top seeded Okkodo Bulldogs in overtime to set up a shot at a title. The Harvest Eagles had already defeated the Panthers for the 3rd place in the IIAAG title game, but the Panther wave would ride on through as they defeated the Eagles 59-52.

The Panthers stayed in front of the Eagles through-out the contest, grabbing a 55-49 lead after a jumper from forward Dillen Dela Cruz with under a minute to play. Eagles Gye-Baek Kim would convert a three on the next trip down to get within 55-52, but a layup from Travon Jacobs would push the lead back to multiple possessions 57-52.

Nick Keefe would ensure the teams victory at the free throw line, hitting the final pair of points to put the game out of reach 59-52.