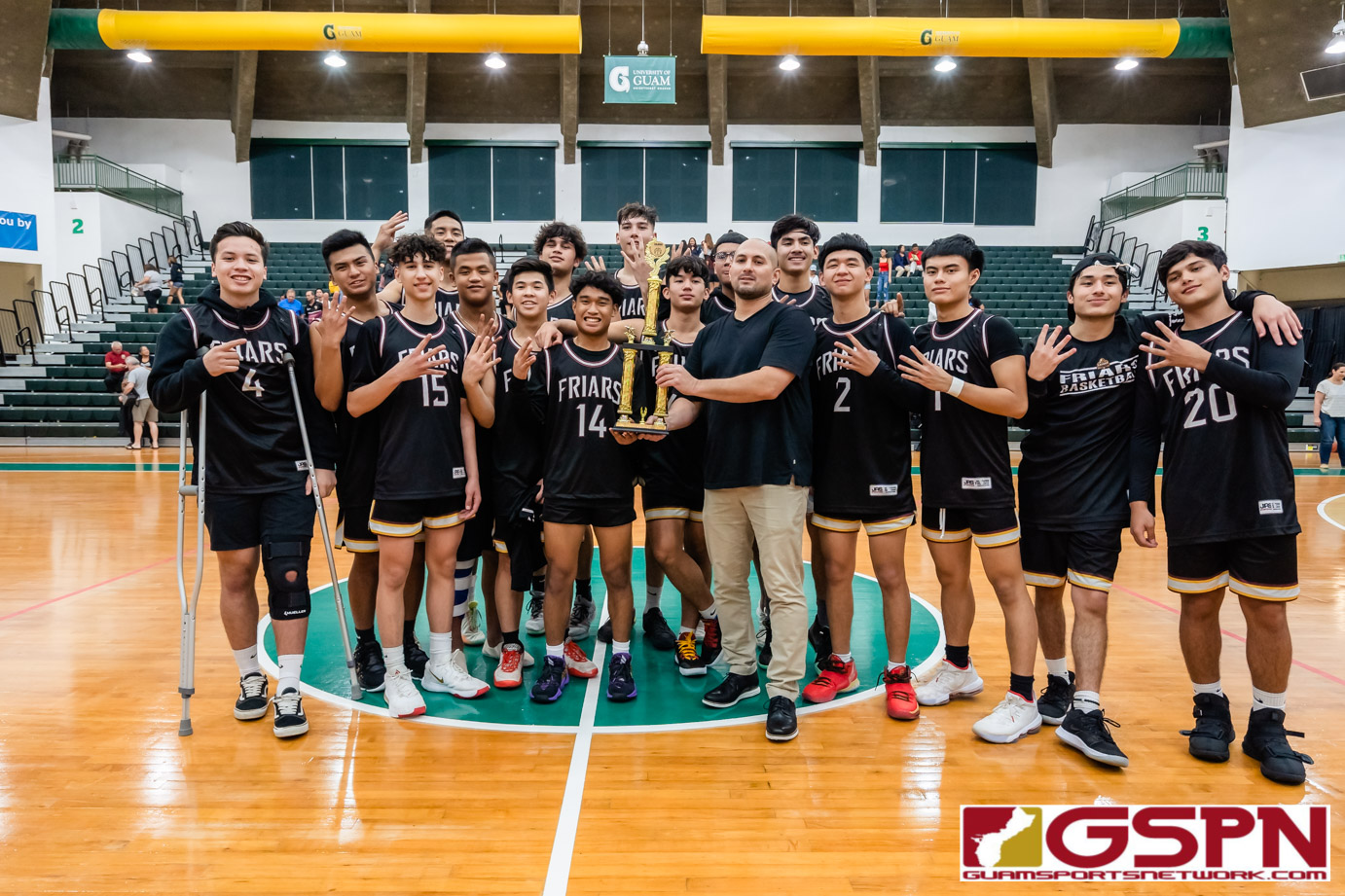 Mission Accomplished.  The Father Duenas Friar basketball team set the bar for future teams and the feat will be difficult for those future teams to complete: winning the triple crown.

The Friar journey started in the land of the rising son in January, winning the Kanto Classic Boys Basketball Championship which featured the best teams in the Far East Region. The second title was winning the IIAAG championship against their rival St Paul Warriors. The third title was accomplished Saturday night at UOG against the Panthers. The Friar sweep was complete.

Colin Santiago jump started the offense and the Friars were up 10-5. The Panthers fought hard and trailed 28-22 by halftime thanks to a couple of three-pointers from guard Nick Keefe.

The Friars go crazy in the third quarter and score 25 points to pull away for good. MVP Matt Fegurgur and big man Kyle Camacho provided buckets in the paint to give the Friars a double digit lead.

The Panthers attempted to mount a comeback with Dillen Dela Cruz and Ryan Taitague scoring in the opening minutes of the final period. The Friars did not allow the Panthers to gain any momentum and pulled away with Fegurgur and Santiago leading the way.

The Friar dream season was complete and the Friars were thankful for who helped them. “This season is dedicated to X (Xavier Akima), Tony Thompson, Mr Bill Roth and Joey Santos,” said Santiago. Santiago had 11 points, six assists and four steals in his final game as a Friar. “It feels good to see all our hard work pay off. Not only in the last couple of months, but for the last four years here as a Friar,” said Santiago.

Camacho led all scorers with 17 points, Fegurgur had 11 points, 14 rebounds and three blocks for the undefeated Friars. “This just shows that this is one of thee most complete Father Duenas teams we had in a while,” said Fegurgur.  “From height to skill to heart, we had everything and I hope the next ones can do it again”.

After winning the GSPN Pre-season, the Friars went to Japan and played against high level teams that just completed their season. The road to the championship included playing four games in the final day to defeat the Kadena Panthers for the championship. The feat is only the second time a team from Guam won against the big schools tournament in Japan (1993-1994 Oceanview).

During that tournament, FD coach Eddie Pelkey utilized all of his players to climb the ladder to win the title.

“One thing we leaned on and that we knew we had an advantage was that we were very deep,” said Pelkey. “Our depth during that tournament allowed us to rest key players to keep them fresh. That tournament taught us a lot about resiliency and adversity,” added Pelkey.

Coming back from Japan, the Friars never lost a game and the pre-season experience groomed an extremely competitive squad. The icing on the cake was Saturday night, the Friars will go down as won of the best of all time.