An inter-league showdown between two of the top teams in the IIAAG and ISA met Saturday at the Phoenix Center. 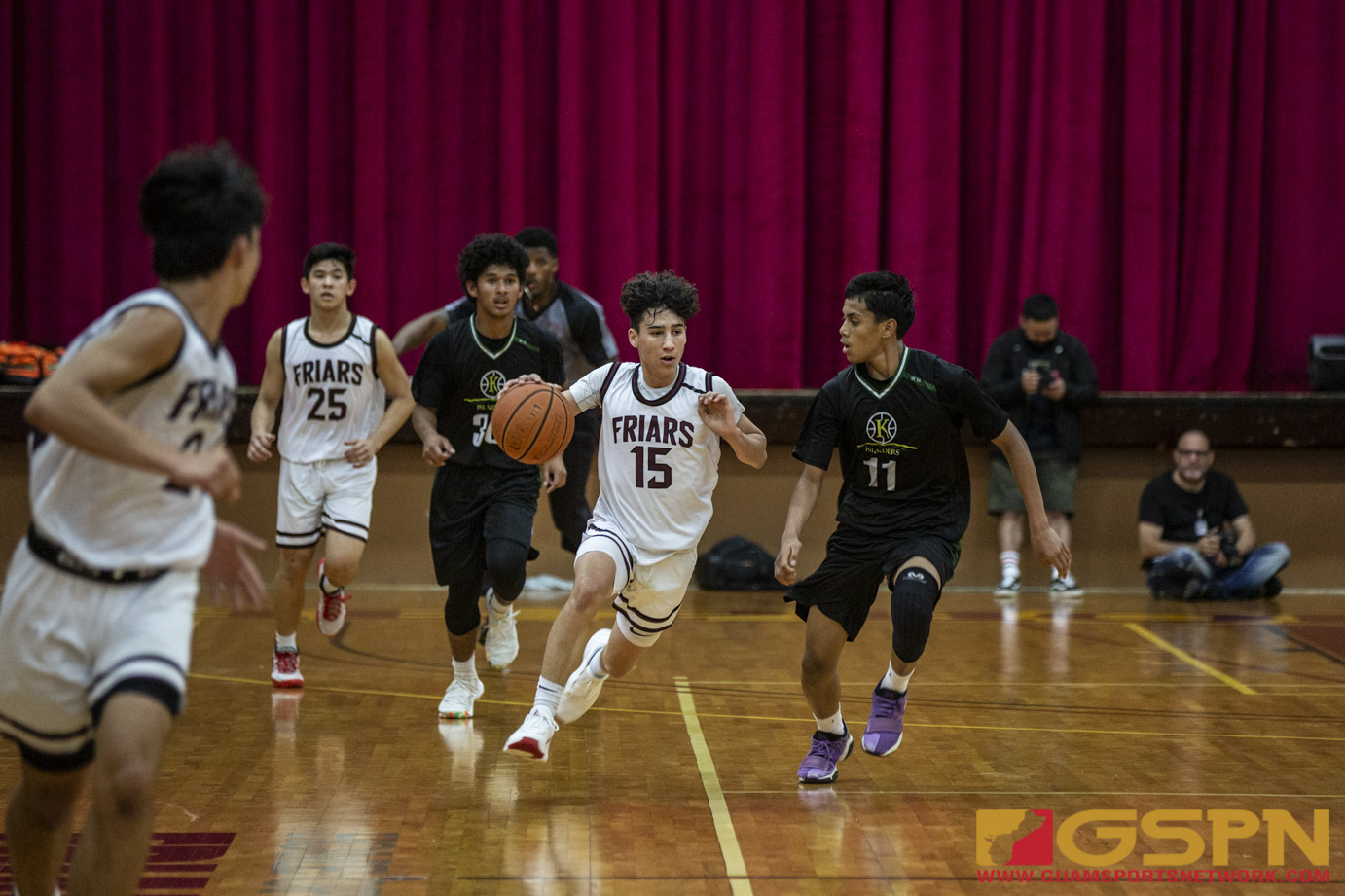 The FD Friars (6-0) held off the JFK Islanders in a wild pre-season finals rematch with the Friars winning 53-40 in inter-league play between the ISA and IIAAG. The game was close until the third quarter as the Friars pulled away behind the all around play of backup center Kyle Camacho and freshman sensation Blaise Ada.

The Friars also had to do without head coach Eddie Pelkey who got ejected after receiving two technical fouls in the second quarter, getting into a heated exchange with the referees.

The Friars trailed for most of the first half with the Islander dynamic duo of Rodson Simina and Jeremiah Kintoki making long-distance shots for the 14-11 lead.

Simina hit two three-pointers and Kintoki dazzled the crowd with his no-look assists to wide open big man Dean Weilbacher in the opening quarter. Simina, however, was forced to sit on the bench with foul trouble and was unable to provide much offense in the second half.

Matt Santos gave the Friars the first lead in the second quarter via a back door pass from Raymond Castro. The Friars enjoyed a brief 16-14 lead before Islanders went to their run-and-gun offense to close out the half.

JFK went on a 4-0 run to close the half behind two buckets from Patrick Talosig and Ralf Manalac. The Islanders headed into the locker rooms up 22-21 at the break.

The Friars came out throwing haymakers to start the third period. Camacho had his way in the paint, scoring six points during a 10-2 run that gave momentum to the home team.

“Coach told me to get into the game, rebound and dominate down low. We are at our best when we get stops and attack the paint,” said Camacho. The Friars outscored the Islanders 19-7 in a decisive third quarter.

Ada and Nathan Perkins-Fuesser helped the Friars maintain a double-digit lead in the final period to cruise to the victory.

Despite not having his senior leaders in the game, Ada said there was no pressure to step up to the plate.

“I dont really feel any pressure to perform well because I trust my teammates. I just go out do my job; execute the plays and play good defense,” said Ada.

Kintoki led the Islanders with 12 points, Robby Saturo had seven points and nine rebounds for JFK. Simina, who was eventually fouled out of the game, had six points. The Islanders record falls to 6-2.

Pelkey was glad his team got the win but also had some words to say about the officiating after the game:

“The referee organization contracted by the IIAAG lacks the knowledge,  experience and conditioning needed to properly control and officiate high level play of student athletes in this game. They are putting the safety of the student athletes at risk. I will not stand for that. The safety and long term health of my student athletes is my top priority. The IIAAG needs to do something to address and further protect our student athletes. “

In the junior varsity game, the FD Friars handed the JFK Islanders their first loss of the season. Jaden Santos led FD with 16 points en route to 51-49 victory. FD is now (7-1) and JFK falls to (6-1).