“This is not the way I want to do this.” 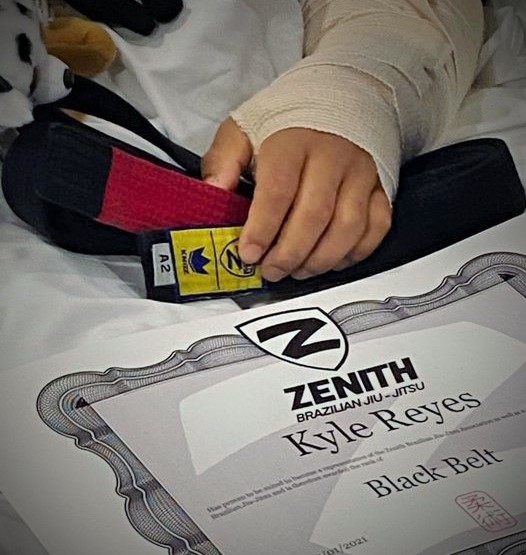 The sudden passing of Kyle ‘Boom’ Reyes has rocked Guam’s sports community near and far.

Prior to taking his last breath on earth, Boom received his jiu-jitsu black belt from professor Marcelo Nunes by his Las Vegas hospital bed.

“This is not the way I want to do this, but I’ve waited for this moment,” Nunes spoke to Reyes with close family on hand. “I don’t hand this to anybody. The goal isn’t about being a good fighter. You have to be a good person. He’s become a great dad, a great person, and he’s met all the goals that I look for as a black belt.”

Nunes met Reyes on Guam 12 years ago when the Brazilian jiu-jitsu ace barely spoke English and Reyes was ‘a skinny younger guy’.

While rolling on the mats on island, Nunes remembers that Boom never wanted to tap and just kept coming back. “The kid had so much heart.”

Since then, Nunes has promoted Reyes on all his belts leading up to his final promotion this week.

Upon placing the black belt in Boom’s hand, the professor gave the student a fond farewell kiss on the forehead.