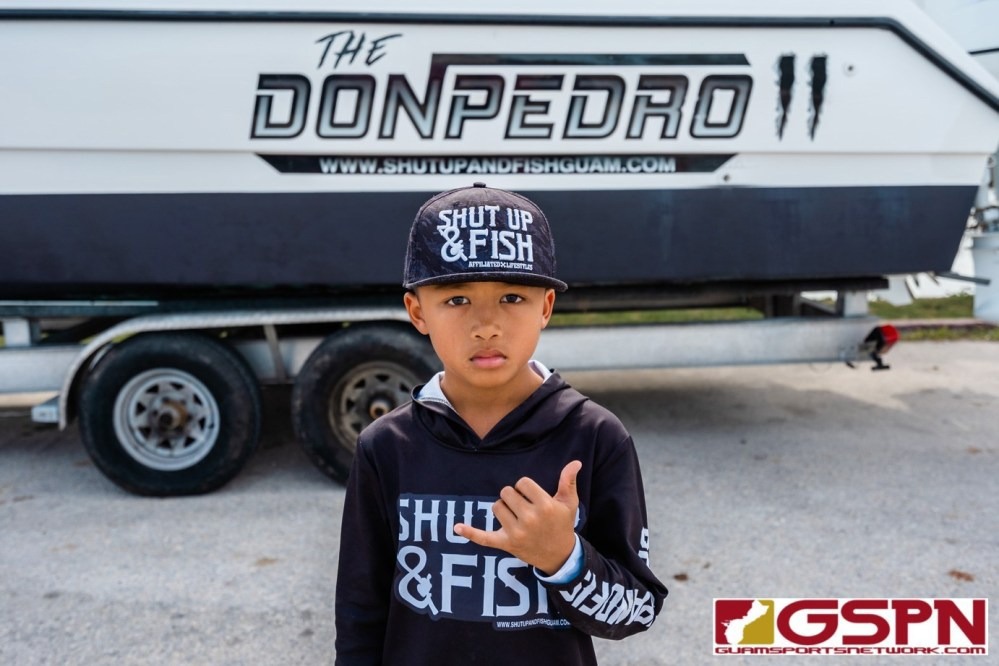 Guam has seen it’s share of sporting trends in youths, like the rise of soccer and basketball and the decline of baseball in the past decades, but one sport in particular has never really caught a big wave of interest: fishing.

Regardless of it’s un-popularity amongst the younger generation, one nine-year-old is changing the narrative and has dedicated himself to the art of fishing, but more than just as a sport and instead as a way of life. His name is Don Pedro Makaveli Cruz.

You’ve probably seen the boat Don Pedro II pulling into the Agana basin or Agat Marina, but what you didn’t know is that young fishing phenom Don Pedro Makaveli Cruz, whom the boat is named after, is the one docking it. He’s learned to fish since two years old and has only refined his skills since as he tags a long with dad Joaquin, and sometimes mom Christina Cruz, owner of ‘Shut up & Fish Guam’, for just about every fishing venture and charter, as long as he doesn’t have school.

The Agana Heights Elementary student already has some shiny accolades under his belt, like being named the Youngest Angler in a Saipan & Rota tournament while assisting dad in 1st place wahoo, 2nd place yellow fin and other categories in the local and CNMI circuit.

“My favorite fish to catch is a marlin,” said the young angler, who refused to share his favorite spots to fish on Guam (fisherman’s secret).

Don Pedro also loves playing baseball, jiu-jitsu and football to maintain an active lifestyle, but his true love is being out at sea with dad.

“I feel so blessed. I haven’t met anyone like this kid. He wakes up with me at three in the morning to get our fishing gear ready to take down to the boat and it’s unbelievable. Everyone that meets him trips out, ” said father Joaquin.

For the love of fishing

Whether it be normal charters with dad or fishing trips to Saipan, Don Pedro is proving his love for fishing stems from his own experiences. The young phenom has found his own love for fishing, even surprising dad with just how much he’s into it by creating his own fishing lures.

“One thing that really surprised me is that he’s started making his own fishing lures. 80-90% of fishermen don’t rig their own lures, but this kid comes to my room and says, ‘dad look what I made!’, and he put it all together. After he made the lure, I took out a charter and we caught a marlin on the lure he made and that was one of the most memorable times with my son,” said Dad.

Don Pedro does wish more kids his age were as excited about fishing as he gets and he’s trying to change that by bringing some of his buddies out with him whenever he can.

“You get to ride a boat, you get to swim and catch fish,” simply said Don Pedro on how he can get more kids his age into the sport. “Just watch [how fun it is] on my YouTube channel.”

The Cruz family have established a steady viewership of over 1000 views each video they produce on their Shut Up & Fish YouTube channel with young Don Pedro starring in just about every video. The videos capture some of the families most memorable moments on the water, even lessons that will not soon be forgotten.

Don Pedro is efficient at rod and reel fishing, but the young star is also getting comfortable spear fishing as he’s learned with Dad and Rob Arrington, social media fishing star.

“I can’t dive too deep, only 30 feet, but I just go down there and try my luck for a couple of seconds,” said Don Pedro.

Life at sea is way more than just a hobby for the Cruz family as dad has turned fishing into a career. Experiencing the lifestyle first hand, Cruz admitted there lies a lot of difficulty in pursuing fishing as a career and only hopes Don Pedro continues to enjoy it for what it is/

“I don’t want him to do what I do when he grows up, because what I do is very hard and I don’t want that for him. I hope he stays into fishing and that he fishes as a way of life and provides for his family and friends. He’s doing it now, but I hope he sticks with it and passes on this tradition to his family,” said Joaquin.

As far as Don Pedro can see, being a fisherman will always be something he’ll be proud to put on his resume.

“I think I plan to do fishing my whole life,” said Don Pedro with a big smile.