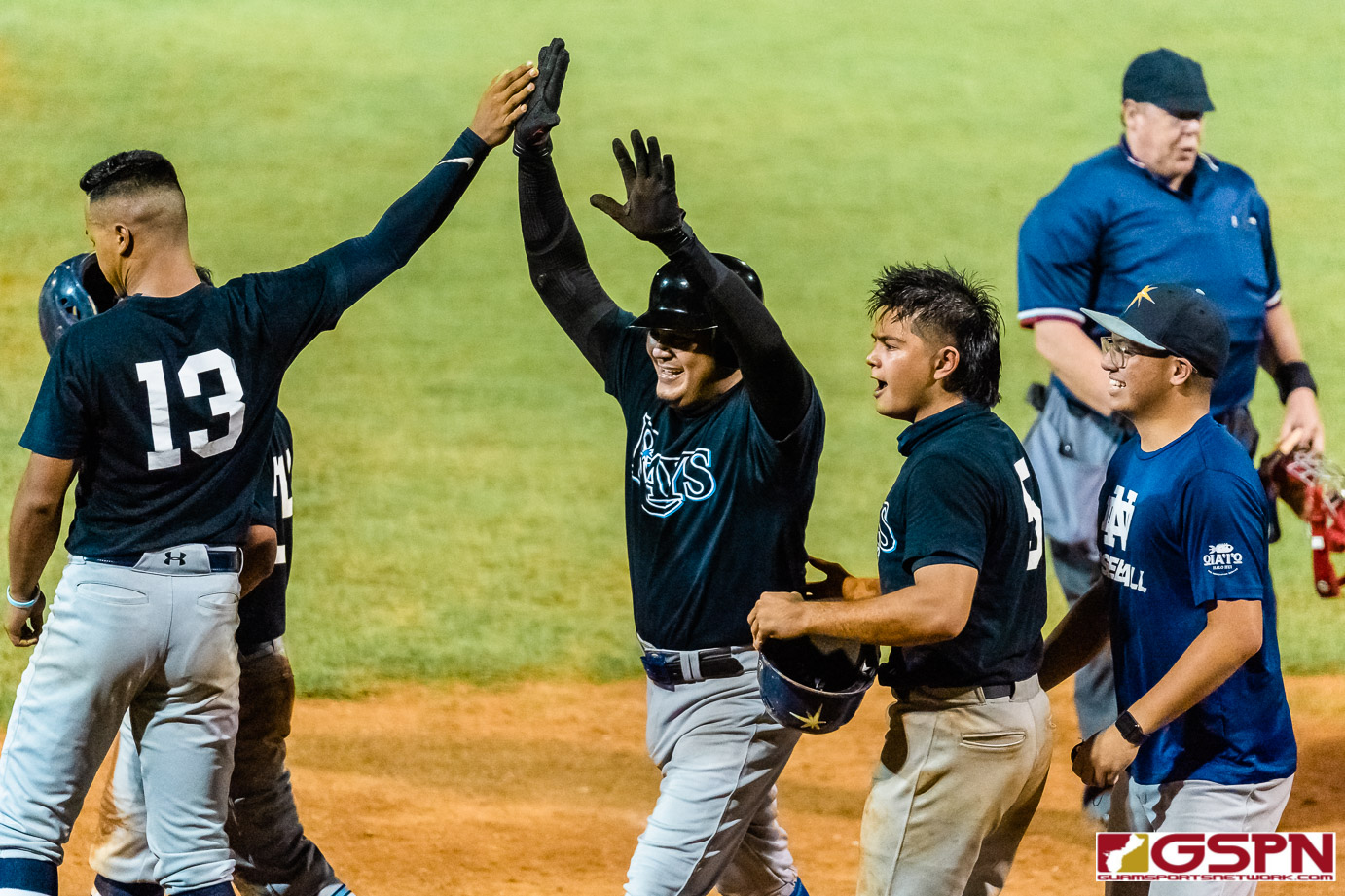 The Guam Major League packed the Paseo Stadium Sunday evening for a battle between the unbeaten IT&E Rays and Paradise Crown Dodgers in what turned out to be a great display of high-level baseball for all in attendance. The Rays would grab the 5-4 victory in a razor-thin game that featured four total home runs, two by each team.

Of all the home runs on the night, the biggest belonged to the veteran Tony Yatar, who hit a three-run homer in the bottom of the 4th inning to give his team a 5-2 advantage. Yatar dialed backed the hands on the clock for a shot deep left for the big play, but not even he remembers when his last home run was in his 20+ years of playing.

“It’s been a while,” laughed Yatar, who was filling in for Glenn Fernandez who’s on vacation. “We always want to put together the best possible line-up we can to compete and I was the next guy up. Something happened and it turned out to be great. The Dodgers are a really good team so we’re expecting a tough road ahead of us.”

Rays Isaiah Nauta was the first to get the home run party started with a solo homer in the 1st inning. Natua’s efforts were responded in the 3rd inning by Dodgers Ryan Palomo knocking a shot deep left to tie the game at one-run each. Yatar responded with a three-run homer in the 4th inning to go up 5-2 and Dodgers Michael Bautista hit a two-run homer in the top of the 6th.

Winning pitcher TJ Sarmiento went eight innings for the Rays, setting the 9th for Kyle Kuekendall to get the save. Sarmiento was prepared to go all nine innings and more give the level of talent both team possess, especially with the Dodgers playing with heavy hearts with the passing of the great Ed Muna earlier this year.

“Big ups to the Dodgers, they’re family over there. I don’t think I’ve ever felt this way about a game, especially because of Uncle Ed. We’re playing the game you love and you’re a part of all of this,” said Sarmiento.

Neither the packed stadium nor two home runs given up phased Sarmiento as he continued to play strong in the 7th and 8th inning to keep the Dodgers off the board.

“I don’t pay attention to any of that,” said Sarmiento on the full stadium of fans. “When I’m up there on the bump it’s always just me and the catcher all the way through. I’m in my own tunnel.”

Kurt Diaz takes the loss for the Dodgers as he finished with one strikeout and relief pitcher RJ Joe took over in the 5th inning, recording three strikeouts

Nauta got the fans off their seats in the bottom of the 1st with his solo homer, which would be his lone hit of the night. Palomo responded in the 3rd with a solo home run of his own to knot the game at one run each.

The Rays would pick up a key run in the 3rd off an RBI single from Cooper Paulino, bringing in Athan Yatar for a 2-1 lead. The Dodgers would tie the game in the 4th after a dropped infield fly allowed a run to score.

Yatar would get a three-run homer with two outs away on a full count in the 4th. Diaz would prevent further damage with runners on first and second, striking out Paulino to end the 4th.

Rays BJ Balajadia would make a spectacular outfield grab followed by a big scoop and throw to first from Paulino to keep the Dodgers off the board in the 5th.

Joe would step in during the 5th, getting his first strikeout of the night on Justin Candoleta.

Bautsita sent a big-time shot near center left for a two-run homer to get within 5-4 in the 6th inning. Joe would get two more strikeouts in the 6th to keep his team within striking distance.

A big double play from Nauta in the 7th would keep the Dodgers at bay.

In the 9th, Bautista would get another big lick on a pitch from Kuekendall, hitting the center wall and staying in play resulting in a single. The Rays would get a key pick-off on the Dodgers relief runner with Kuekendall getting the final strikeout on Florencio Binuya to end the game.

The Redhawks improve to 3-4 on the Friday evening game with a win over the now 0-4 Cardinals. Winning pitcher Tristan Cruz had 10 total strikeouts with relief pitchers Coby Barnes and Kyle Arce getting three and two respectively.

The streaking Jr. Nationals fall for the just the second time all season thanks to a big performance from Spartan Sean Cruz, who finished with nine strikeouts. Calvin Aguon’s 2RBI’s proved big with Jaren Gumataotao scoring two runs.