A very busy day of IIAAG beach volleyball resulted in a big morning for the St. John’s Knights as they picked up their first win of the season. 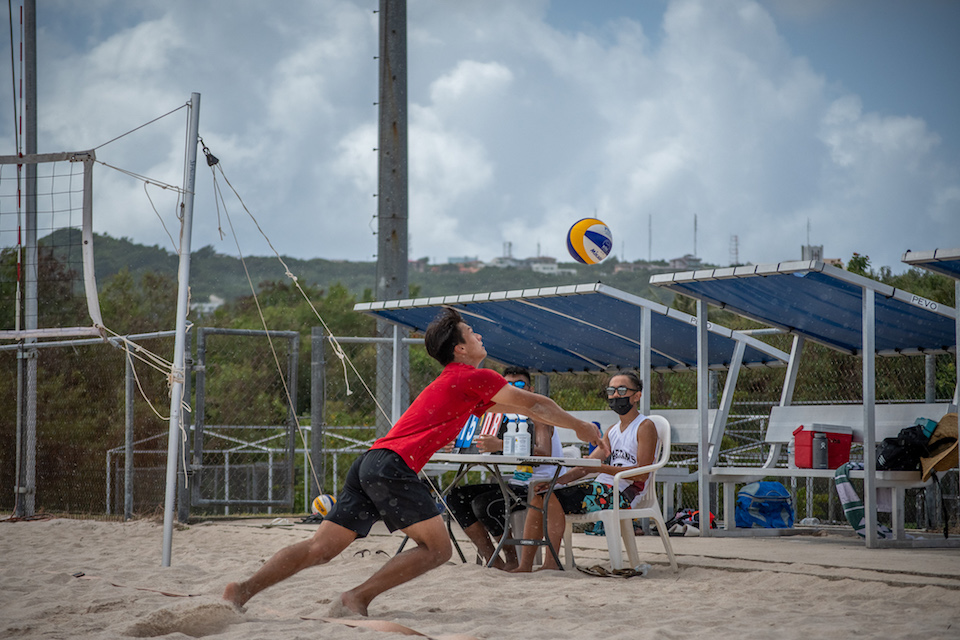 St. John’s Knights got on their first win of the IIAAG Beach Volleyball League defeating the FD Gold team 2-1. After the seed 2 and 3 teams each split their matches, the top seed team’s took the main court to decide the winner.

The St. John’s duo of Aidan Johnson and Cameron Kelley defeated the FD Gold top seed team of Deavan Hudtohan and Joseph Mafnas in straights to improve to 1-1 for the season.

“It feels amazing to get our first win of the season and I’m excited for the rest of the season,” said Kelley.

FD’s Hudtohan started the contest off with a pair of aces to help the Friars Gold to an early 5-2 advantage. The Kelley/Johnson team did not panic and capitalized on Friar errors to take their first lead of the game at 7-6. The Knights went on a 5-0 run with Johnson at the service line using the wind factor to his advantage and cruised to a 21-12 first set victory.

FD’s pair of Hudtohan/Mafnas were not able to gain any momentum in their first action of the season and found themselves trailing 12-3 in the second set. Friars coach Steve Pangelinan called a timeout and reminded his team to try and minimize the hitting errors. The Friars were able to find a rhythm with Mafnas making some plays at the net but their deficit was too far to overcome. The Knights won the second set 21-17.

The team of Kelley/Johnson were in the same position in their first match of the season with the first two matches (second and third seed) splitting, leaving the top seed teams the pressure of winning to earn the team victory.

“We knew we had go out there and give it our all,” said Johnson. “We were in this position before and it didn’t go well (the first time) so we really wanted this”.

After dropping the first set, St. John’s McCormic and Stenson looked unstoppable in the second set. Accurate passing and good serving by both players gave them a 16 point victory in the second set and they had a ton of confidence heading into the third set.

McCormic and Stenson had momentum behind them in the third set, taking a 7-5 lead. After another timeout, the Howard/San Nicolas pair regrouped and tied the match at 10. FD’s Howard captured the lead with a big kill to go ahead 11-10. San Nicolas served three straight points and played good defense to shut the door on a Knight comeback to win 15-11.

The third seed match was just as exciting with the team of Masato Rabago and Matthew Sevilla from St. John’s defeating FD Gold’s third seed pair of Keith Bodan and Noah Invencion (18-21, 21-11, 15-9)

After Rabago/Sevilla dropped a heartbreaking first set 18-21, they came back to even the score with a convincing 21-11 victory. The final set was a seesaw battle but good defense by Rabago and Sevilla was enough to hold on for a 15-9 victory.

Special notes for beach volleyball The games took place at the GFA Beach Volleyball court. There are two beach volleyball courts and the second and third seed team’s play simultaneously. After the two and three seeds finish their matches, the top seeds take the main court. Of all three matches, the team that wins two matches is declared the winner for the team event. Set point is 21 for each game; a third set match point is 15.

All points are tallied for each pair/duo and the teams are ranked for the pairs season finale to declare a champion. The top seed teams automatically receive three points and another three points earned for a victory. Second seed team’s get two points and third seed team’s garner one point; each team also gets extra points for victory. At the end of the season, each pair/duo is ranked for the pairs tournament to declare a champion which takes place in April.