The St. John’s Knights dominated the Singles Division winning gold for both the boys and girls. 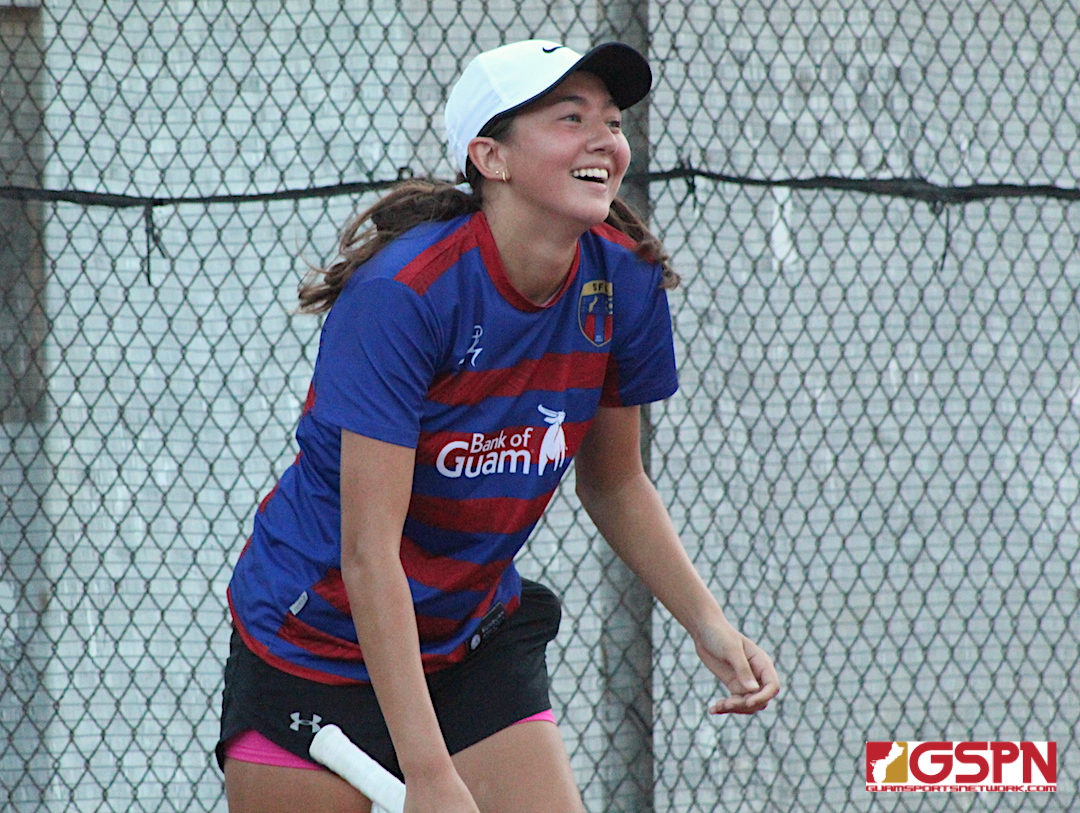 Three-time Gold winner Kaia Malakooti is all smiles after scoring the final point to win the 2021 Singles Title.

A day after the Harvest Eagles took the top spots in the IIAAG Island-wide Tennis Tournament Doubles, the St. John’s Knights owned Wednesday evening at the Tamuning Tennis Courts by claiming the top two spots in the Singles Division.

Knight Kaia Malakooti secured her spot as a three-time champion while freshman Arman Sachdev made quite a debut season finishing gold.

“My mentality on this one was completely changed. In our first one, the nerves were there since I haven’t played her in a year and she’s always my toughest competition. I have to give a huge shoutout to my teammates for always supporting me from the beginning and it’s really thanks to them that my nerves flew out of my mind; they really got me going,” said Kaia.

Kaia was capitalizing on errors Gregoire didn’t make in their first meeting, holding a 6-1 advantage through seven sets. Gregoire managed to grab the 8th set, but Malakooti finished strong in the 9th and 10th to secure her three-peat.

“Everything was just as serious and just as competitive as the first game, but I always respect [Marie] as a player no matter what happens on the court,” said Malakooti.

While Kaia was doing her thing, teammate Arman was in a fierce battle of his own on the court right next door, which is unusual for most Gold Medal tennis matches. Malakooti was admittedly curious how her fellow Knight was fairing, but she was too dialed in to her own game to pay much attention.

“Aarman and I practice together sometimes and we always have each others backs. We told each other we could get it done and didn’t doubt each other one bit, and now look what we accomplished!,” added Kaia.

Sachdev pulls away from close battle

The top seeded St. John’s Knight Arman Sachdev fully expected a battle against Harvest Eagle Anthony Gregoire which is why he wasn’t at all phased leading 5-4 in sets with the underdog close behind. Sachdev saved his best games for last, claiming the final three sets to win the Singles Gold 8-4.

“I was expecting this. [Anthony] is a good player and I face him on nationals and I know how he plays so I just had come ready with my game plan… You have to focus on the point in front of you and less of the overall score. Like when it’s 5-4, I’m not thinking ‘oh man it’s 5-4’, I’m thinking I have to win this point and focusing only on what I have to do to win that point,” said Aarman.

After setting the bar high after just his first year, winning it all once isn’t enough for the young tennis star who already has aspirations of defending his gold medal for the rest of his high school tenure.

“You can’t be satisfied until you’ve won it all right? I’ve still got three more years to go and I want to win more!,” said Sachdev.