The St. John’s Knights provided a showdown against each other to begin the girls IIAAG Beach Volleyball Season. 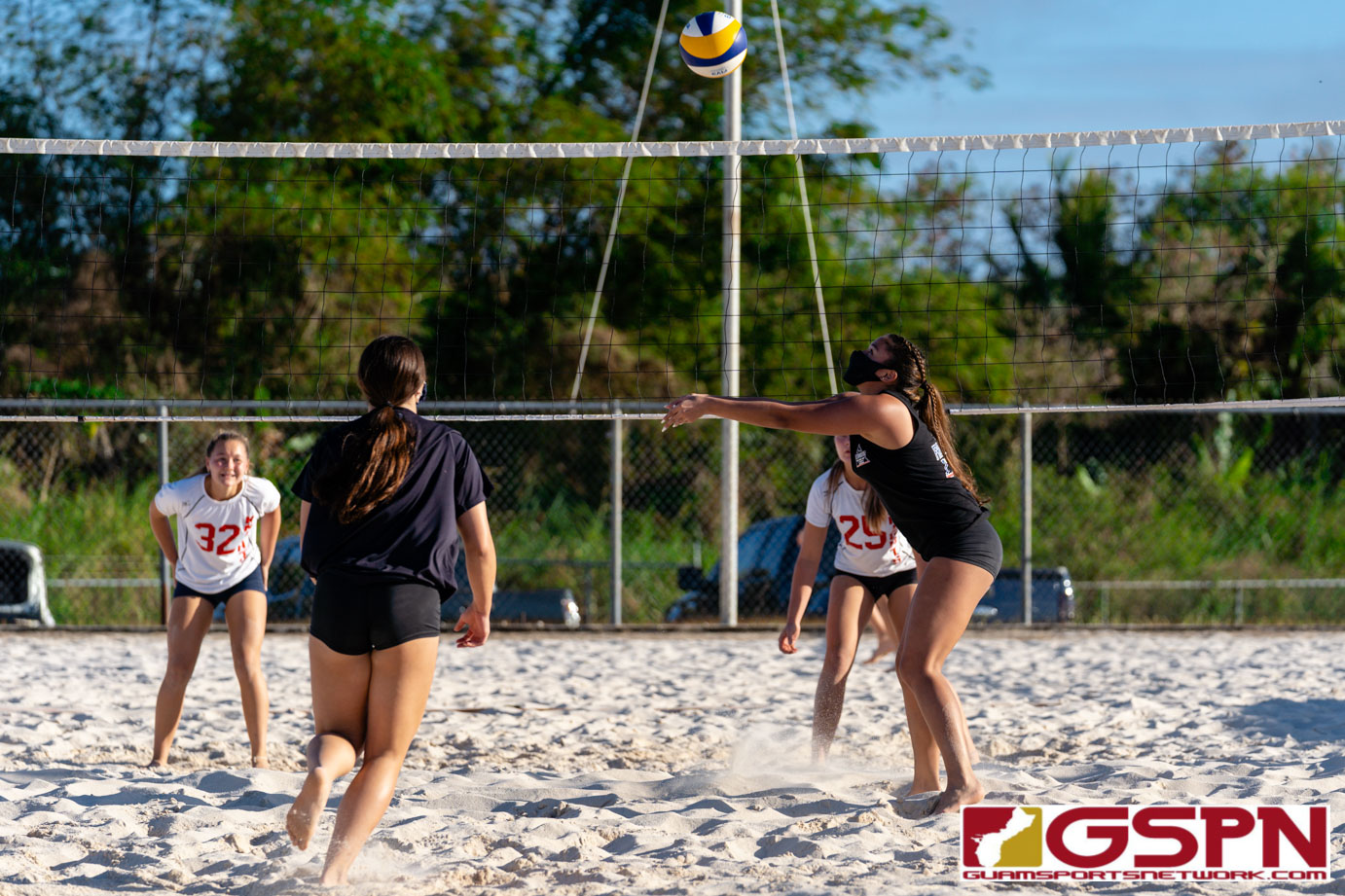 After running an exhibition season in 2019 and their first full season in the early goings of 2020, IIAAG Beach Volleyball has officially kicked off their 2021 sports year with their second day of action at the GFA Sand Courts Tuesday afternoon.

The St. John’s Knights took the sand for an in-house battle with their White vs. Black teams going against each other. The Knights Black won all three matches of the day to secure the team win.

2019 was the last we would see of the Knights tandem Hallie Wigsten and Tylee Shepherd, dubbed as ‘Cookies & Cream’, with Wigsten leaving to graduation last season. The pair went unbeaten in the two years playing together which left a lot to wonder who would join Shepherd for her final season of beach. Enter ND Royals leading lady Austia Mendiola, who is a three-time title winning member of their indoor team and no slouch on the beach scene after competing in the Nationals event last year.

“Everyone’s been asking me who I was going to play with considering that I’ve been with [Wigsten] with a very long time, and of course everything new makes it difficult, but I’ve known Tia basically my whole life. We’ve been playing volleyball together for quite some time so we already have good chemistry on the court and I just know we’re going to do great this season,” said Tylee.

Shepherd and Mendiola won their showdown with the Knight sisters Page and Lane Murrell in straight sets 21-10, 21-10. Aside from a few hitting errors and court spacing, the new duo of Tylee and Tia showed promise as one of the more dangerous pairs this season.

“It’s definitely different from court since I play court 24/7, so coming and playing beach is very different. I’m just happy I have a little bit of experience,” said Austia.

Despite not being able to start 2021 with the indoor season like their accustomed to, both Shepherd and Mendiola stayed busy in the off-season in the event sports would come back during their senior year.

“I always liked having indoor first because it gets you warmed up for beach… but over summer we were able to put together some Hagan practices so I was able to get into the sport it with that. But jumping right back in is fun. At first, I was skeptical about us starting, but once my dad said games were going to start up again I was really excited for that,” added Tylee.

Austia spent time off-island training over the summer through volleyball camps and has been staying active, just waiting for her chance to get back on the court. Even though the indoor scene is up in the air, hitting the beach league is providing Mendiola her volleyball fix.

“I started training since the beginning of last year [for volleyball] just hoping we would have our indoor volleyball season in our first semester. I was training hard, even though sports kept getting pushed back, I still wanted to stay active and keep up with the grind,” said Mendiola.

The Royals didn’t produce a team of their own for the 2021 beach season and have four members suiting up under the Knights.

Beach Volleyball will be played six days out of the week with the boys and girls teams rotating their games throughout!